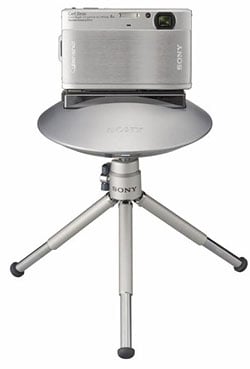 As the name suggests, this is a new camera dock that automatically tilts, pans, composes, detects faces, and takes candid photographs of people at parties. Pretty interesting, huh?

When I first heard about this new “personal photographer”, I immediately started thinking about its potential uses. Basically, you have an immobile robot that can take candid photos through facial recognition that you can place anywhere.

Wouldn’t candid street photography be an interesting application of this new technology?

You would place the camera and robotic dock anywhere on the street at any height, stand by it for a while as people walk near it, and then harvest the candid photographs taken afterwards.

Though you wouldn’t have creative control over the photographs you end up with, this would still be a neat experiment. I can already imagine people making Flickr sets or groups around this very idea.

In fact, I’m going to make one right now, before the thing is even shipped in September. Here it is: Party-shot Street Shots. If you end up buying this $150 dock come September and take some automatic candid street photos with it, be sure to join the group and add them to the pool!

There’s no word on whether it will be customizable or programmable, allowing you to specify conditions for the automatic photography. If Sony is smart, they’ll open up the system to hackers and people who want to customize the Party-shot’s operation.

Let me know what you think about the Party-shot’s potential street photography application. Also, if you can think of any other interesting applications of the Party-shot, let’s discuss it in the comments of this post!

Shooting a Hummingbird (with a Camera)