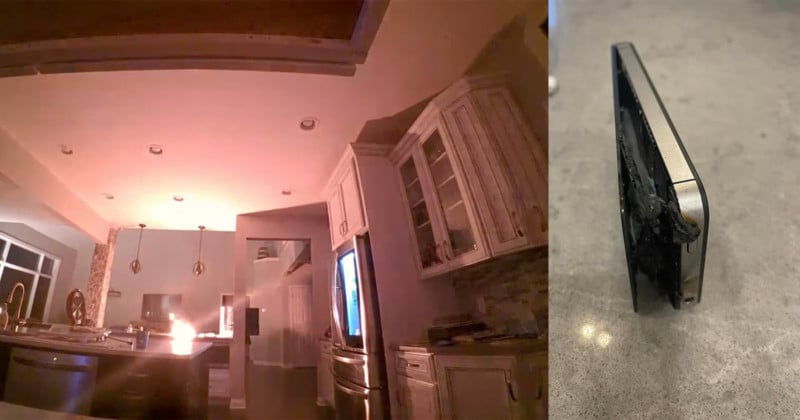 An iPhone 4 exploded and caught on fire while charging in the middle of the night as a family slept upstairs, and the alarming incident was caught on a home security camera.


Brian Leigang, his wife Jennifer, and their five children from Ohio were oblivious there had been a fire until their son noticed the charred phone the next morning.

The family’s Google Nest camera, set in the kitchen, recorded the frightening fire that fortunately did not spread.

“It is really scary watching that video from our kitchen because a lot of our kids sleep with this same phone charging in their bed at night or on a nightstand next to their bed,” Leisgang says.

The incident happened on January 9 at 01:00. The iPhone 4 was left charging on the family’s kitchen counter when it suddenly burst into flames.

Leisgang tells Fox29 that the phone was being charged with an original Apple charger. It was only when the family noticed soot on the countertop as well as the broken and blackened phone.

“It had a silicone case on it that cracked off and the phone split open. And there was black soot all over the countertop and on the chairs and on the floor,” Leisgang tells Fox29.

“I realized how lucky we were that we didn’t have anything on the countertop and that it just went out on its own.”

That night the parents had cleared the island which is usually covered in their children’s schoolwork and other flammable objects.

Leisgang shared the video and photos of the aftermath on Facebook as a warning to other Apple users to be vigilant and ensure their electronics are charging away from anything that could potentially catch on fire.

The family contacted Apple seeking advice about using a “vintage” device, they wondered whether it was too old to still be used. The iPhone 4 was released in 2010.

“Their verbal response, and I am paraphrasing because I did not write it all down, was that my device was vintage and they don’t expect their clients to be using a phone that old,” Leisgang says. “They did not really have an answer.”