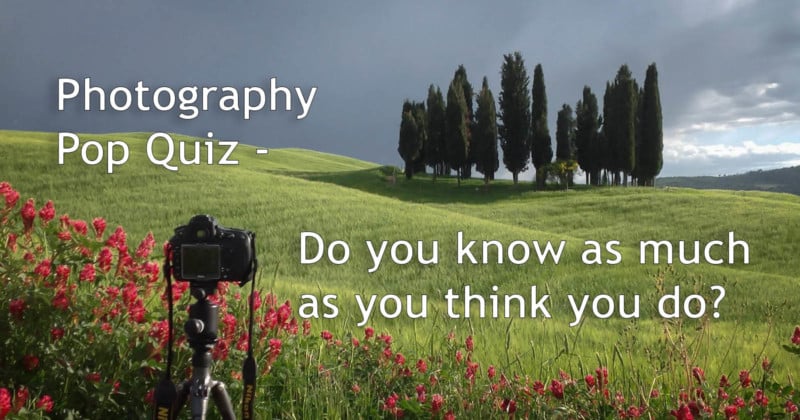 Do you know as much as you think you do about photography as a whole? Test your photographic general knowledge with this fun little quiz.


Although most of these questions are really easy to answer, some might be a bit trickier, and many will bring a smile to your face. They’re all multiple-choice questions, so the answers are already provided. What could be simpler?

The correct answers are included after the final question.

1: What was Ansel Adams’ middle name?

3: Andreas Gursky’s “Rhein II” became the most expensive photograph ever sold when it was auctioned at Christie’s on November 8th, 2011. How much did the winning bidder pay for it?

4: What camera was used by astronauts to capture the first photos on the moon?

5: Which of the following is not a tripod manufacturer?

6: What is the name of the equipment that is used to move the camera slightly between each photo in a time-lapse?

7: A “tilt-shift” lens is most commonly used for what genre of photography?

A) It was too difficult to hold a smile for the long exposures required in those days.
B) Dental hygiene was not very advanced and people didn’t want to show their bad teeth.
C) That was before anyone had discovered to tell these people to say “cheese”.
D) Smiling for no reason was thought to be an indication of lower intelligence (or insanity).

12: Which South African photographer was awarded a Pulitzer Prize in 1994 for his image of a vulture stalking a starving Sudanese child?

13: Ansel Adams is best known for his iconic landscape photographs of which American National Park?

15: The “Zone System” is a photographic technique used for determining what?

A) Compositional balance.
B) Optimal exposure.
C) Ideal shutter speed for a moving subject.
D) Position of the sunrise and sunset.

16: Which one of the following is not a valid photographic term or technique?

17: The “BeetleCam” is a purpose-built device created in 2010 to capture photos of what?

18: What does the term “Hyperfocal Distance” refer to?

19: What does the term “High Key Portrait” refer to?

21: What is the best way to adjust the “depth of field” of an image?

22: The first digital image CCD chip was developed in 1973. What was the resolution?

23: What would you use an “extension tube” for?

A) To increase the megapixel resolution of an image.
B) To reduce the minimum focal distance of a lens.
C) To extend the legs of a tripod beyond their standard length.
D) To join two or more lenses together into one.

24: What would you use a “polarizing filter” for?

A) To prevent over-exposure of snow at the North or South Pole.
B) To remove unwanted reflections from water or metallic surfaces.
C) To darken the sky when shooting straight into the sun.
D) To add a starburst effect to bright lights.

26: What do we call the scattering of light particles (photons) as they pass around hard edges?

27: What does the term “Dynamic Range” refer to?

A) How much of your photo will be perfectly sharp and in focus.
B) The (generally accepted) measure of how awesome your photo actually is.
C) The furthest (in miles) you’ve ever traveled to take a photo of something really amazing.
D) The difference (in luminosity) between the darkest shadows and the brightest highlights.

28: Which one of the following statements is (most) false?

A) Magenta is not a true color and is best described as “not green”.
B) The reflection of the sky can never be brighter than the sky itself.
C) RAW files always capture accurate representations of every scene.
D) All of the really great photographs have already been taken.

29: Which of the following statements is (most) true?

A) The smaller the aperture the greater the depth of field.
B) Always disable your camera’s image stabilization system when using a tripod.
C) Camera batteries always drain quicker in colder temperatures.
D) All of the above.

A) I’m so bored right now that any distraction would be worth some of my time and effort.
B) I’m merely a beginner at photography, hoping to learn something new from this quiz.
C) I already know everything there is to know about photography, so I’m sure I’ll score 100%.
D) I’m hoping to find some errors in the content of this quiz, to bring to everyone else’s attention.

How many did you correctly answer? Leave a comment below to let us know!