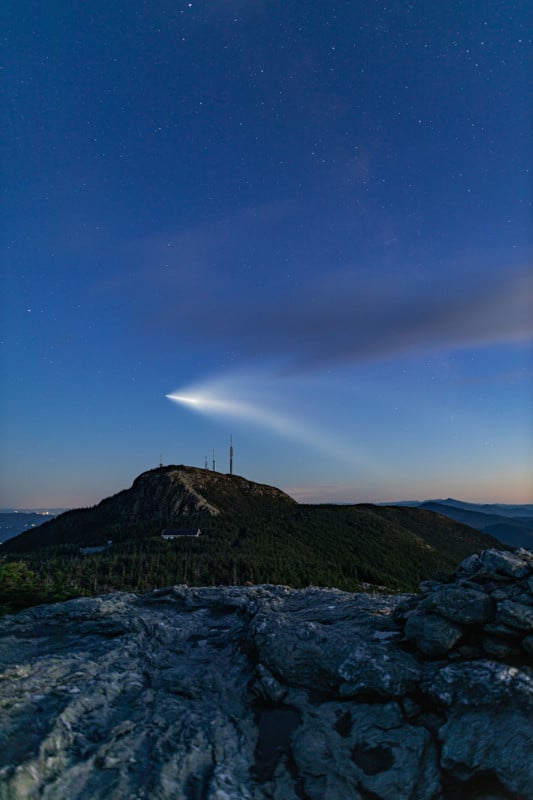 A photographer who climbed to the top of a mountain planning to capture the Milky Way serendipitously captured a SpaceX Rocket.

Joshua Defibaugh tells PetaPixel that he climbed to the top of Mount Mansfield, the tallest mountain in Vermont, to shoot some nighttime pictures.

“The funny thing about this shot is that I didn’t even plan for it,” he says.

“I wasn’t looking for the rocket nor was I even aware that one had launched recently.”

Defibaugh explains that the photo was taken about an hour after sunset on September 24 and he was preparing to frame the Milky Way galaxy above the mountains with the Vermont city of Burlington in the background.

“As I was framing the shot, I started to see this glow in the sky. I had no idea what it was. It crossed my mind, very briefly, that it could’ve been aliens,” he says.

“But then the rocket and its trail (I’m not sure if that’s the right term) materialized. It wasn’t until I showed the photo to some friends that I learned it was a SpaceX rocket that launched earlier that day.”

Defibaugh says that he had no time to consider composition or dial in the settings. He went with an eight-second exposure on his Canon EOS R which had an f/1.4 20mm Sigma ART lens attached. He also used an iFootage Gazelle TC7 tripod with a Really Right Stuff BH-55 ball head.

“I took a minimal approach to editing the photo in post-processing,” he says before sharing the settings he used in Photoshop.

Defibaugh bumped the exposure up and increased the shadows while decreasing the whites. Then he increased the texture, clarity, and dehaze to give the photo some extra chutzpah.

Local television station WCAX encouraged Defibaugh to share the photo thanks to it featuring the channel’s antenna arrays located on top of the mountain.

“I wasn’t planning on sharing the photo widely,” he adds.

It has been a busy second half of the year for SpaceX and the Moon. Since late June, three of the company’s rockets have launched payloads to Earth’s lunar satellite with one more set for early Friday morning.