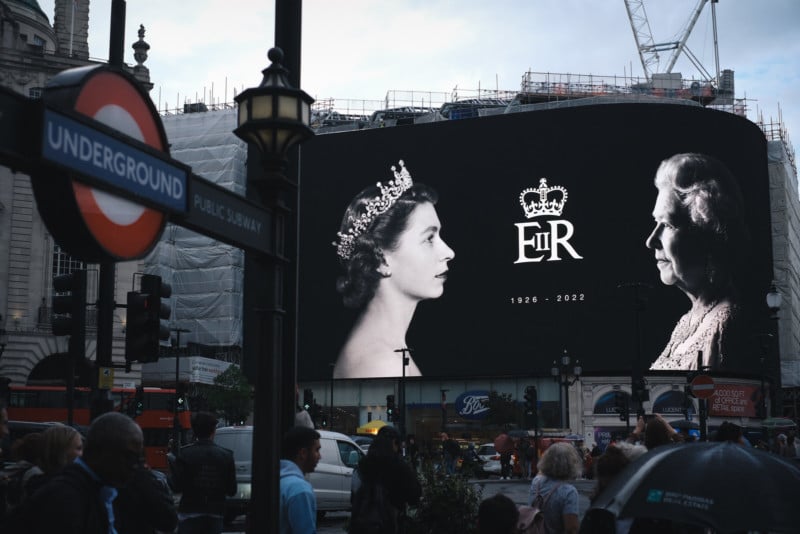 The late Queen Elizabeth II was one of the most photographed figures in history. During a long period in which British military and political reach waned, images of Her Majesty underpinned the projection of soft power and played a key role in bolstering public support for the monarchy.


Her 70-year reign witnessed sweeping technological changes and groundbreaking innovation in photography. The revolutionary Leica M3 was released in 1954, used by a generation of frontline photojournalists and even the Queen herself. Soon followed Polaroid, and then single-lens reflex (the legendary Nikon F) and point-and-shoot autofocus cameras. And finally, the move from darkroom to digital. Smartphones and Instagram have transformed how images are experienced and shared, often instantaneously.

The Queen’s likeness appeared on banknotes, coins, and stamps and she was represented in many art forms. Renowned photographers including Sir Cecil Beaton, David Bailey, and Annie Leibovitz were able to transform her image across generations.

Following her death, pictures memorializing Queen Elizabeth’s legacy were quickly disseminated by both the world’s press and the state from a vast online archive. These photographs documented a life spanning ten decades, picturing her everywhere from official residences to far-flung parts of the Commonwealth, opening schools and hospitals to peering through binoculars from racecourse balconies.

To capture this image, Beaton transformed the green drawing room at Buckingham Palace into a studio, using a 1000w bulb and painted backdrop of the fan-vaulted ceiling in Henry VII’s Lady Chapel. His combination of textures (the coronation robes, imperial state crown, scepter and orb, gilt furniture), colors (blue and gold) and lighting (the white aura that surrounds the Queen) lends ethereality to an otherworldly portrait.

Dorothy Wilding’s 1952 photographs of Queen Elizabeth II, taken just weeks after her accession, were also shared widely during the period of mourning. British curator and author Val Williams described Wilding’s ability to make women “look as they had never looked before … uncompromisingly modern”. One of her portraits also illustrated British postage stamps between 1952 and 1967. Soon after the Queen’s death, the immediately recognizable profile of a youthful monarch wearing a tiara replaced rolling advertising on the vast electronic display at London’s Piccadilly Circus.

While the Queen’s physical appearance changed over the decades, her global outlook and public impartiality remained constant. Photographs rarely depicted an emotional monarch – the Aberfan disaster in 1966 and selected memorial services were notable exceptions.

A handful of famous photographers did occasionally reveal another side to the Queen. Beaton portrayed her wearing a boat cloak against a blue backdrop in 1968. Critics described the image – inspired by Pietro Annigoni’s 1955 painting – as one of an “imperious, forceful and determined monarch” prepared to move with the times.

Bailey’s 2014 black-and-white portrait of 88-year-old Queen Elizabeth II was another example. It depicted her wearing a sapphire dress and jewels with a radiant smile, and is emblematic of how she embraced shifting photographic styles during her reign.

I took my camera onto the streets of the capital following the Queen’s death, capturing not just the spirit of the nation during a rare period of official mourning, but also blanket projection of the Queen’s image. Just moments after her death, regal portraits appeared on buildings, bus stops, and advertising hoardings.

Wide-eyed tourists focused their smartphones not on London’s iconic double-decker buses and telephone boxes, but on unfamiliar scenes – black-and-white portraits in gold picture frames placed in shop windows with black backdrops. Pilgrimage-like crowds surged down The Mall. Others in overalls, suits, and uniforms hurried around the capital carrying bouquets of floral tributes, stopping occasionally to take photographs.

Reverential portraits published in newspapers immediately following the Queen’s death morphed into more traditional, ceremonial images: King Charles III delivering his first address to the nation; the new monarch greeting mourners at the palace and assuming “the heavy duties of sovereignty”; and the royal family meeting members of the public. Photos documented the journey of Her Majesty’s coffin, draped in the Royal Standard, from Balmoral to St Giles’ Cathedral in Edinburgh and then, finally, lying in state in London.

As the bells rang out at Westminster Abbey, hours-long queues by the Thames and crowds building along the Mall waited to pay their last respects, holding newspapers with bold front pages, clutching photographic prints, and wearing flags depicting the Queen’s likeness. Souvenir kiosks did a brisk trade in commemorative postcards, flags, hats, and pins, all emblazoned with her image.

Displaying the Queen’s image so ubiquitously after her death affirmed her iconic status. Her state funeral marks both the end of a period of reflection and the beginning of a new era headed by King Charles III. In the coming years, photographs of the New Elizabethan era are bound to endure alongside continuing debate about the future of the monarchy and the Commonwealth.

About the author: James Clifford Kent is a Senior Lecturer in Visual Cultures at the Royal Holloway University of London. The opinions expressed in this article are solely those of the author. This article was originally published at The Conversation and is being republished under a Creative Commons license.