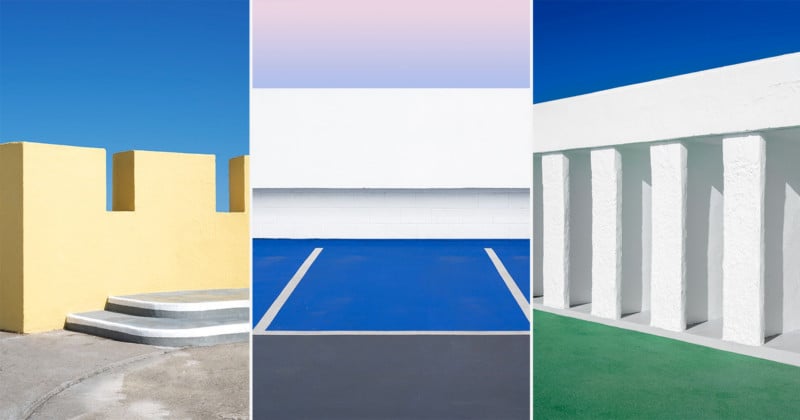 Combining hyperrealism photography with fragments of mundane and ordinary places, photographer Connor Daly has created unique images that blend the real and the imagined.

Hyperrealism style in photography brings out intense colors, contrast, and sharpness of a scene as opposed to what is visible to the naked eye. This type of photography largely characterizes what Daly, who is based in London, United Kingdom, produces while capturing the simplicity of his surrounding environment.

Daly tried his hand at a mix of mediums, like sculpture, drawing, painting, and both digital and film photography. It wasn’t until he came across a book called “Helmand” by photographer Robert Wilson that his love and interest in photography were affirmed.

“Interestingly, by a chance encounter, I ended up assisting Robert six years after finding his book,” Daly tells PetaPixel. “Robert sent me a signed copy a couple of years ago, which I have at my studio. I have worked for a number of photographers over the years, many of which have left a lasting impression on me. I think it’s important to find inspiration in your mentors, as well as your through research and study.”

Daly’s work focuses on what is typically considered mundane. His photos are abstract and seemingly simple at the first glance but reveal careful geometrical considerations, blurring a line between documentary photography and carefully-crafted design.

“My work aims to transcend the limitations that photography presents, and explore something deeper,” he explains. “My pictures tell you more about myself than they do about the places in which they depict.”

Daly’s work also draws inspiration from his personal experiences, like his “Schwarzschild Radius” and “Peripheries” series which he created in response to being diagnosed with cancer almost a year ago. He says that the images capture the ensuing anxiety and uncertainty that followed.

“Whilst, ‘Spatial Visions’ and ‘Courts’ explore my interest in how pictures of mundane and ordinary places can suggest a deeper meaning beyond what is immediately apparent,” he says.

Reliable Equipment for Any Condition

Some shots require long exposure work for which he uses his Benro tripod and Benro B2 ball head, which he finds has fluid movement that’s easier to use than geared heads. For precise interior photography, Daly replaces the ball head with a dual macro rail system to have precision control of axis movements.

This year, Daly says he is continuing to work on his “Phantasmagoria” project where he photographs theatres and village halls across the United Kingdom, and hopes to head to Los Angeles for a new project that is currently under wraps.

More of Daly’s work can be found on his website.