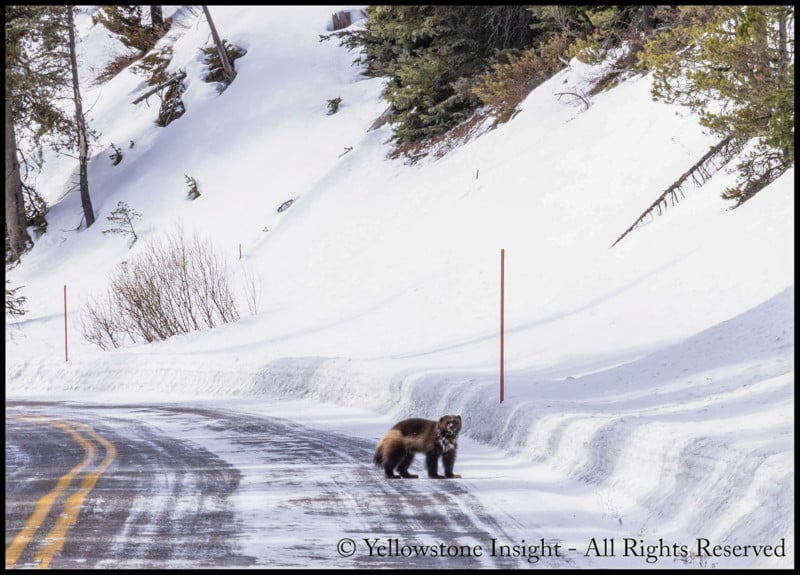 MacNeil Lyons, a former park ranger, had a once-in-a-lifetime encounter with the elusive wolverine in Yellowstone National Park, and he managed to capture rare photos of the animal while his guest recorded video.


Lyons is the owner and lead naturalist/guide for a private guiding company, Yellowstone Insight, based in Gardiner, Montana, at the north gate to Yellowstone National Park.

On March 5, 2022, Lyons was guiding a father and his 9-year-old daughter through their first experience of Yellowstone.

“About 11:38 a.m., we were returning from the park’s Northeast Gate after an already amazing wildlife day,” Lyons tells PetaPixel. “We rounded a corner heading westbound, and in the oncoming lane was a low-to-the-ground, dark animal loping away from us!”

At first, Lyons and his guests thought they were seeing a bear. However, what looked like a young black bear moving away from them turned and looked over its right shoulder toward the group. At this point, he immediately realized that they were looking at a wolverine.

The naturalist stopped the car, and the group was able to spend a full three minutes observing the elusive creature as there were no other cars on the road to disturb it. 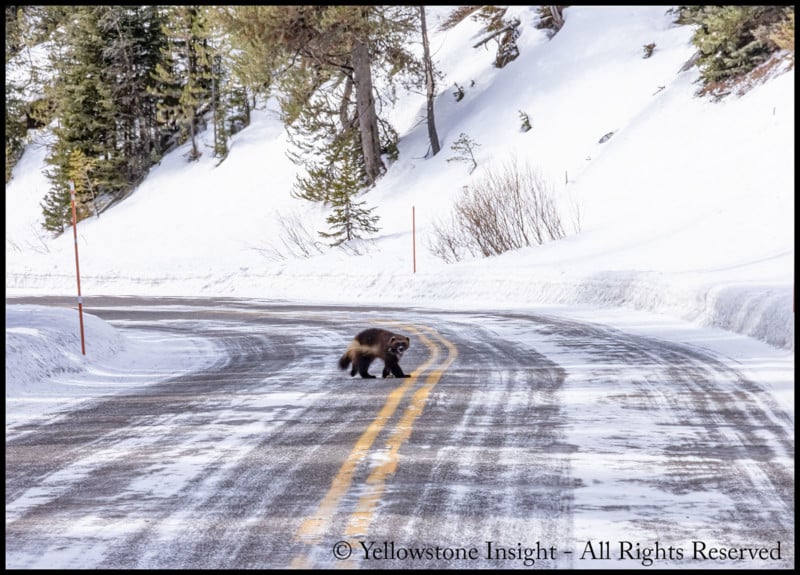 “By its size, I assume that it is a healthy male,” explains Lyons. “The wolverine was definitely curious for a bit. It jumped up onto the snow berm adjacent to our lane twice and returned to the road to size us up as our tour vehicle was stopped, idle.

“I would like to believe that the wolverine we encountered on March 5, 2022, inside Yellowstone National Park had not had a close experience with humans before.

“At one moment, he sat down on the snow berm to the side of the road and watched us. His nose raised, and he smelled the air as it wafted from us towards him. It could have been on the search for food as the tracks indicate that it followed a set of moose tracks downhill from the dense woods to make contact with the road corridor.”

Dr. James C. Halfpenny, a world-renown wildlife tracker who has studied wolverines, took the time to drive to the site and check on the tracks. He told Lyons that the wolverine was only on the road for less than 130 yards, and they were fortunate to have spotted him. 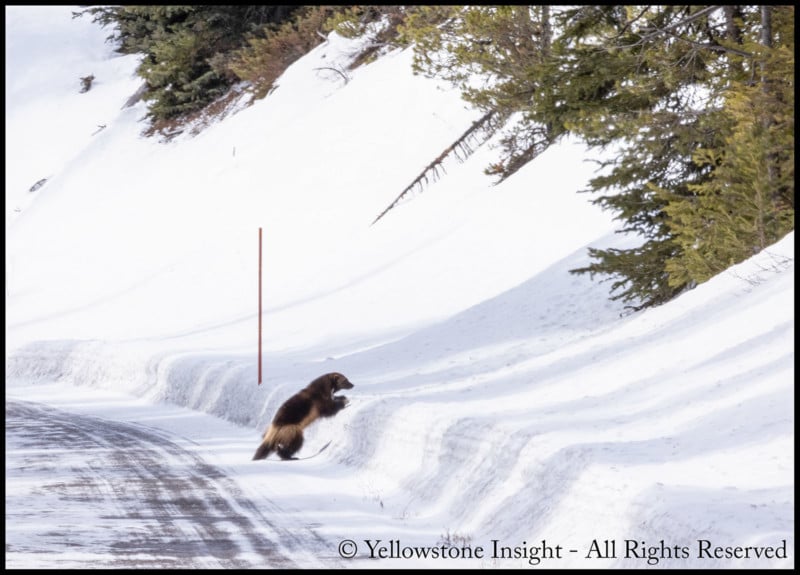 Photographing the Wolverine Without Getting Close

The wolverine was about 200 yards away, Lyons says, and he shot his photos with a 100-400mm zoom lens fully extended to 400mm, as getting closer would have caused the wolverine to scamper away. The naturalist feels that by staying back, they were able to “have the extended time” with the wolverine in view.

“I did try to stabilize the camera lens on the side mirror of the driver’s door,” remembers the Yellowstone guide. “But thought that the idling vehicle could compromise the quality of the image, so I tried to lean out a little farther and hold the camera out the window towards the wolverine in front of us.

“After taking a few images, I thought about the fact that I was shooting over the vehicle engine block that was generating a lot of heat on that cold March morning… I just quickly took the images that I could during those three minutes that we were with the elusive wolverine.” 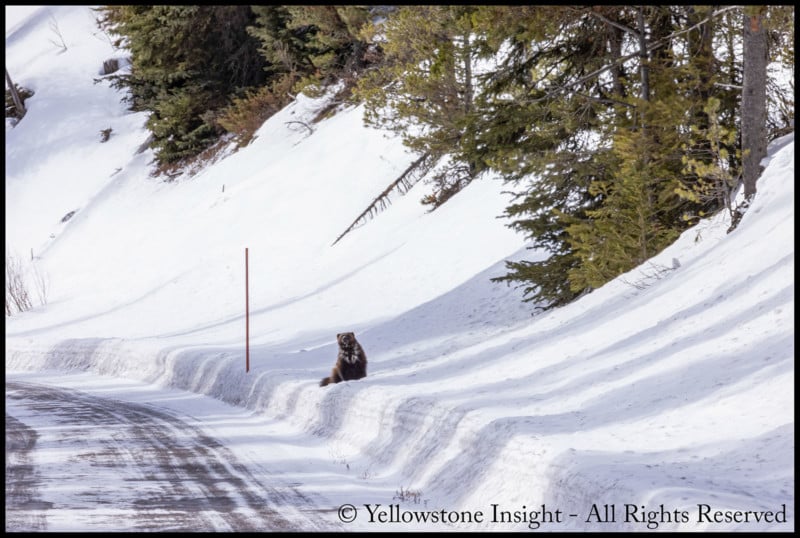 Lyons has been fortunate to live and work inside Yellowstone for almost 22 years, but this is only his second sighting of a wolverine.

The first doesn’t even count, he says, as it was well over a few miles away and he could not make out any details of the creature. It was high on a snow-covered ridge in full winter, and as he watched the animal moving around, Lyons deduced that it was not a bear as it was in the middle of winter with plenty of snow. Hence, he concluded that what he saw was a wolverine at around 10,000 feet (~3,000m) in the Gallatin Mountain Range of southwest Montana. 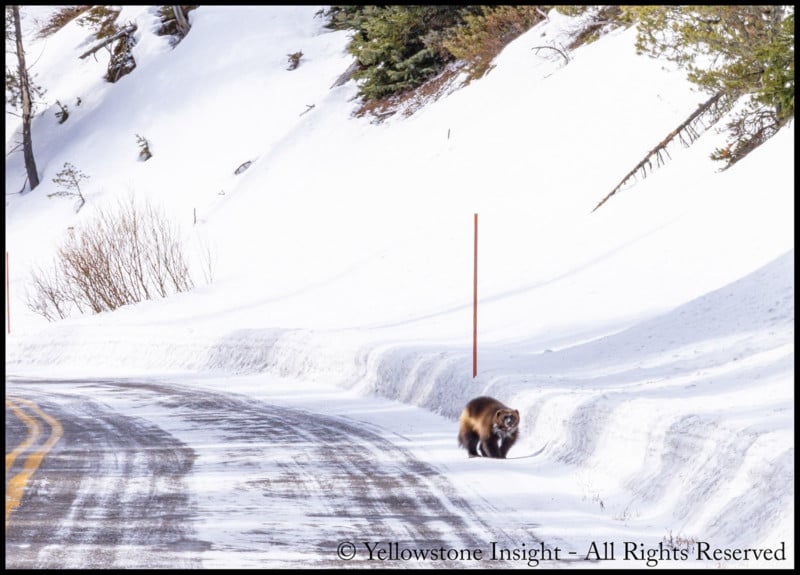 This latest encounter was truly a remarkable one as Lyons could visually and photographically confirm that it was a wolverine.

The wolverine is so elusive due to its low population density in the lower 48 states. They need wide-open tracts of land that are removed from human intrusion. The annual range can extend around 350 square miles for a male wolverine, and the solitary animal prefers high-elevation and rugged landscapes that can be seen as rather inhospitable to most humans.

The wolverine population is extremely low in Yellowstone. Lyons says a conservative estimate is that there are only 6 or 7 in the entire park. Yellowstone is 2.2 million acres in size, making it larger than Rhode Island and Delaware combined. Considering that, Lyons and his tourist customers should feel extremely lucky that this wolverine decided to get on the road not too far away from their Chevy Suburban and put on a three-minute show for them.

“This was a first and likely last time I will have such an encounter,” Lyons says.

You can find more of MacNeil Lyons’s work on his Instagram.