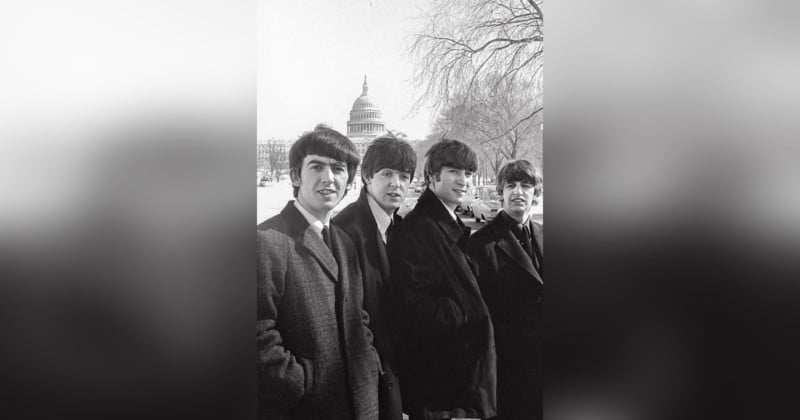 Photographer Dennis Brack certainly had beginner’s luck as he captured The Beatles in front of The Capitol on his very first assignment for the renowned photography agency Black Star.


In the fall of 1963, the young aspiring photographer went to the photo agency Black Star and showed his portfolio to Ernest Mayer, one of the founders of the picture agency.

“He looked at my work, grunted a little, and asked me if I had a day job,” recalls Brack. “When I answered that I was a second-year law student, he replied, ‘stay in law school.'”

Kurt Safranski, Ernest Mayer, and Kurt Kornfeld, three German Jews, fled Berlin during the Nazi regime and formed the photo agency Black Star in the United States in 1935. Time and Fortune publisher Henry Luce, the largest publisher in the day, collaborated with the photo agency to form Life magazine, the first all-photographic American news magazine, which dominated the genre for several decades.

Photographing the Beatles in Washington, D.C.

On February 10, 1964, the day before the Beatles arrived in D.C., Brack got a call from Phil Rosen, a salesman at Black Star. Phil had two German magazines that wanted coverage of the Beatles trip.

“While the Beatles were looking at the Washington Coliseum, where they would play that evening, I talked to Harry Benson [who was assigned to travel with The Beatles on their inaugural American tour] for the first time,” Brack says. “Harry [b. 1929] asked me if I had a car.

“The Beatles had one limousine but no room for Harry. He needed a ride. Harry told me to pull my car right up to the bumper of the Beatles’ limousine.”

On the way to their hotel, the limousine made a sharp left, crossed The Capitol Mall, and stopped. The Beatles got out and ran a few yards into the snow. The young photographer just left his car in the middle of the street, grabbed one camera, and followed. The group picture happened quickly because it was cold, and the Liverpool boys wanted to get on their way.

“I think that I made 16 frames,” remembers the Black Star shooter. “Each of the Beatles was looking at a different photographer. I recall pointing to my camera and saying, look right here.

“No time for fill light (the negative is a bear to print), and the Nikon SP [Nikon’s first professional rangefinder] that I was using had a 1/60th of a second flash sync—absolutely no flash sync for a bright sun and snowy day. It was shot on Kodak Tri-X 400 which was used by most photojournalists since 1954 when it was introduced.

“One of the things that make this picture my favorite is that it is almost an exclusive. Harry, myself, and one other photographer who must have been close and joined our photo session. Other Washington photographers were running toward our location as the Beatles were getting back into their limousine.”

After getting the shot Brack put the film roll in an envelope, took it to the Greyhound bus station where they had small package shipping.

“I think Howard Chapnick [1922–1996], the owner of Black Star [he bought the agency in the same year 1964] picked it up early the next day,” remembers the photojournalist.

The Start of a Fruitful Photojournalism Career

Since that day, Brack has made thousands of pictures with the Capitol background from Presidents to Popes, hundreds of Senators, and thousands of ordinary people, but the Beatles picture in front of the Capitol is the one he likes the best.

To finish the story, Brack did graduate from law school but became a full-time member of Black Star, a first-class picture agency that truly represented their photographers. Black Star marketed his photographs, solicited magazine and annual report assignments, and handled his TIME contract. He worked there for fifty-five years.

“I paid back Harry’s favor many times over,” the photographer says. “In Washington, at Martin Luther King Jr.’s funeral, during the Gulf War, I would hear Harry’s slightly high and a little hushed voice with the British accent, asking, “Dennis, do you think you could do me a little favor.”

At the MLK funeral, Brack had contracted to build a platform for a giant crane to get pictures of the interment. Harry wanted a place on the crane.

You can see more of Brack’s photos of The Beatles’ first U.S. concert at The Washington Coliseum in 1964 on his website. Other photos can also be found on his gallery and Instagram.

Image credit: Header – The Beatles posing in front of the US Capitol on the day of their first concert in the US. February 11, 1964. Photo by Dennis Brack