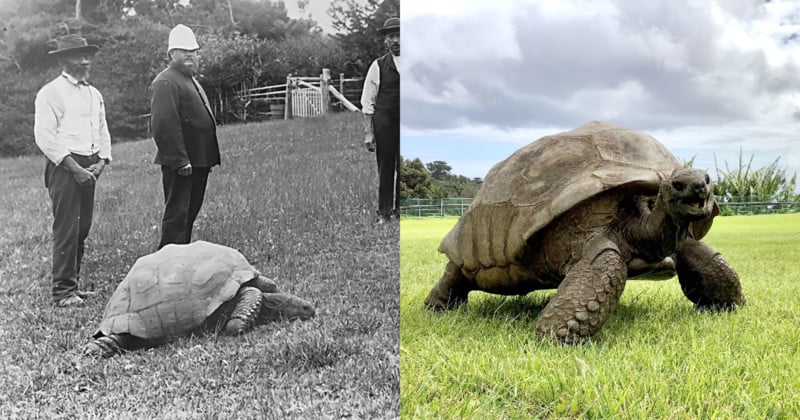 Jonathan is a giant tortoise that lives on the remote island of St. Helena. He turns 190 years old this year, making him the world’s oldest tortoise to ever live. Photographed as far back as 1886 and today, Jonathan now has pictures taken over 136 years apart.

The World’s Oldest Land Animal Ever

Jonathan is a giant Seychelles tortoise who arrived at St. Helena by ship in 1882. A letter in the island’s records states that the tortoise was a gift to St. Helena from British colonial administrator Sir William Grey-Wilson, who later became the island’s governor in 1887.

“Jonathan was fully grown at that time [of arriving at St. Helena], which would be at least 50 years old, so his hatching year would have been about 1832,” says Teeny Lucy of the St. Helena SPCA. “He is the oldest land animal in the world — [there are] many older [animals] in the ocean!”

Celebrating his 190th birthday this year, Jonathan was just certified as the world’s oldest land animal and oldest turtle ever by Guinness World Records.

“His official record title is oldest chelonian – a category which encompasses all turtles, terrapins, and tortoises,” Guinness World Records writes. “The previous oldest chelonian was Tu’i Malila, a radiated tortoise that lived to be at least 188. Presented to the royal family of Tonga by Captain Cook c.1777, Tu’i Malila remained in their care until its death in 1965.

“Jonathan is believed to have been born c. 1832, thus making him 190 years old in 2022. Jonathan’s age is an estimation based on the fact that he was fully mature, and hence at least 50 years old, when he arrived in St Helena from the Seychelles in 1882. In all likelihood, he is even older than we think.”

An Aldabra giant tortoise named Adwaita died in March 2006 in India at an estimated age of 255, but Adwaita’s age has not been verified.

Jonathan Was Photographed in 1886

Jonathan is so old that known photos of him span over 136 years. A picture captured by an unknown photographer back in 1886 shows Jonathan with another giant tortoise on the grounds of St. Helena’s Government House.

As Jonathan was already fully mature in the photo, he looks roughly the same in pictures shot in the present day.

Age is Catching Up to Jonathan

Jonathan is looking good, but he has far outlived the ordinary life span of his species, and he has understandably developed health issues in his advanced age.

“Giant tortoises generally live up to around 150 years, so he is doing very well!” Lucy tells PetaPixel. “He is now mostly blind due to cataracts and has lost his sense of smell, nevertheless he knows his territory so well that he moves about the large paddock and grazes the grass with no problems.

“We are pretty sure that he knows the sound or feels the pressure of our footsteps and he has a very good appetite.”

Lucy and a veterinarian named Joe feed Jonathan by hand once a week on Sunday to make sure he has the nutrition he needs.

“In 2009, it was discovered that his beak (they don’t have teeth!) that usually scythes the grass was crumbly and soft and that Jonathan was losing weight,” Lucy says. “The extra weekly food that was introduced made a difference and now his beak regrew its sharp edge.

Jonathan’s senses may be failing him, but he still has a surprisingly active social life.

“There are 4 giant Indian Ocean tortoises on St Helena, Jonathan, David, Fred and Emma and they live in the Paddock of the Governor’s residence – Plantation House,” Lucy says.

“In spite of his age, Jonathan still has good libido and is seen frequently to mate with Emma and sometimes Fred – animals are often not particularly gender-sensitive!” Joe tells Guinness World Records.

When he’s not eating or spending time with his fellow tortoises, Jonathan is often quite sedentary.

“These tortoises do not hibernate as there would be no need in the Seychelles, but as it can get quite cold in the winter here, they do all slow down a lot and spend more time inside their shells or tucked into piles of grass left for them by the gardeners at Plantation House,” Lucy says.

“Joe the vet and I feel very privileged to be involved in the care of this special animal and to celebrate his 190th year.”