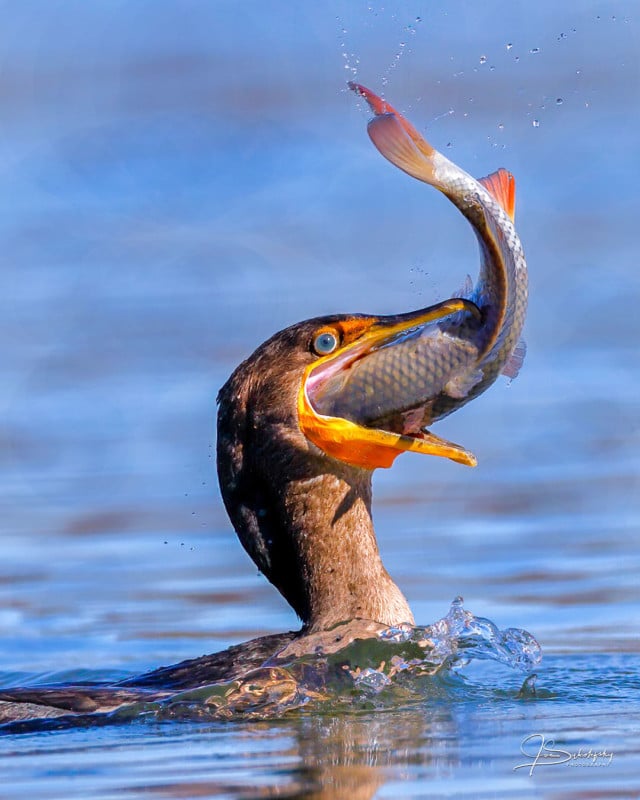 Joe Subolefsky, a well-traveled Maryland-based wildlife photographer, shot a photo that he says captures the daily struggle between predator and prey: it is of a cormorant trying to swallow a fish that almost looked too big to be its meal.


The photograph was taken at Conowingo Dam in Darlington, Maryland, just below Pennsylvania. The big draw to this hotspot for bird photography is the abundance of bald eagles in the fall.

Double-crested cormorants are common birds that birders and photographers often overlook — the cormorants and gull species in the area are “supporting actors” in the show headlined by the fishing bald eagles.

“I live five minutes from Conowingo Dam and nestled between leading workshops for Chas Glatzer (Shoot The Light), I often have the privilege of spending quality time at Fisherman’s Park just below the dam,” says Subolefsky. “Typically, I leave the dam at about 10:00 am as the light becomes harsh and the bald eagle action subsides. On November 9, 2020, the eagles were especially active and performing acrobatic feats that I couldn’t walk away from.

“At about noon, I shifted my eyes to a minor ruckus just to my left, near the face of the dam. I noticed a cormorant struggling with a fish that looked too large to conquer. As the cormorant leaned and maneuvered the fish, I walked parallel to the struggle to maximize my chances of getting the best composition.”

To get good bird action photos, you must set up in the right spot and be proactive to get the shot you picture in your head as it happens in real-time. This is achieved by observing the birds outdoors, which will translate into predicting the bird’s behavior and how the event will unfold.

“I knew before I took the photograph that I wanted to capture splash off the fish’s tail as the cormorant flicked the fish up and into its mouth,” Subolefsky says. “I also wanted to increase my chances of getting a nice shot of the wake off the bird’s chest. On this day, I was lucky and smiled as I watched the scene play out in my viewfinder just like I envisioned it would.”

Subolefsky used a Canon R5 with a Canon EF 600mm f/4L IS III USM lens to capture this moment.

This action was taking place much closer than the bald eagles, so the bird photographer wanted to get more depth of field. He, therefore, stopped down his lens from wide open to f/6.3. The shutter speed was maxed out at 1/8000s to freeze the water droplets flicking off the tail, adding the defining moment to the struggle.

Joe Subolefsky’s work has graced the cover of Ducks Unlimited, Audubon, Cornell University’s Bird Biology Textbooks, and more. As a passionate, lifelong outdoorsman, he strives for technical perfection behind the lens, allowing his pictures to not only capture nature’s beauty but tell a story you can feel.

You can find more of Subolefsky’s work on Shoot the Light, Instagram, Facebook, and Fine Art America.

Update on 1/25/22: Regarding whether or not the bird was successful in swallowing the fish, Subolefsky says: “Unsure. The bird eventually drifted in the current out of my site still trying to swallow the fish.”