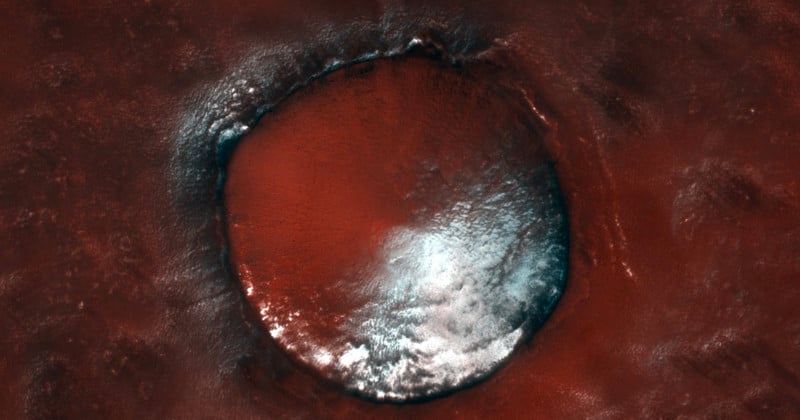 Spotted by Digitaltrends, the image was captured by the Trace Gas Orbiter that snaps images of the surface of the red planet, examines the gases in the atmosphere, and acts as a communications link between landers and other devices on the surface and planet Earth. The orbiter is officially a collaboration between the ESA and Russian space agency Roscosmos and the photo, originally captured on July 5, 2021, shows a nearly four-kilometer-wide perspective of the surface and the ice dusted crater near the north polar region of Vastitas Borealis on Mars.

“Like a sprinkle of powdered sugar on a rich red velvet cake, this scene from the ESA/Roscosmos ExoMars Trace Gas Orbiter captures the contrasting colors of bright white water-ice against the rusty red martian soil,” the ESA describes.

The ESA says the crater is partially filled with water ice more prevalent on the north-facing slopes since that region receives fewer hours of sunlight throughout the year with the dark sections on the crater edges likely containing volcanic materials like basalt, giving it a sort of scorched looking appearance.

The full resolution photo file of the crater, seen below, can be downloaded from the ESA website.

The presence of water on the planet is a big deal for space exploration, since bringing the precious liquid would be too heavy to carry all the way to the planet on a potential future manned mission. The presence of the ice means the liquid could be melted down and used for drinking water or fuel. The problem, according to the ESA, is that most of these deposits that have been found exist near the polar regions of the planet, and most missions want to land near the equatorial regions. Naturally, the next step is to seek out ice below the surface of the planet with missions like the upcoming Mars Ice Mapper, or the last option is to take the hydrated minerals from the soil and bake them to release any water they might contain. 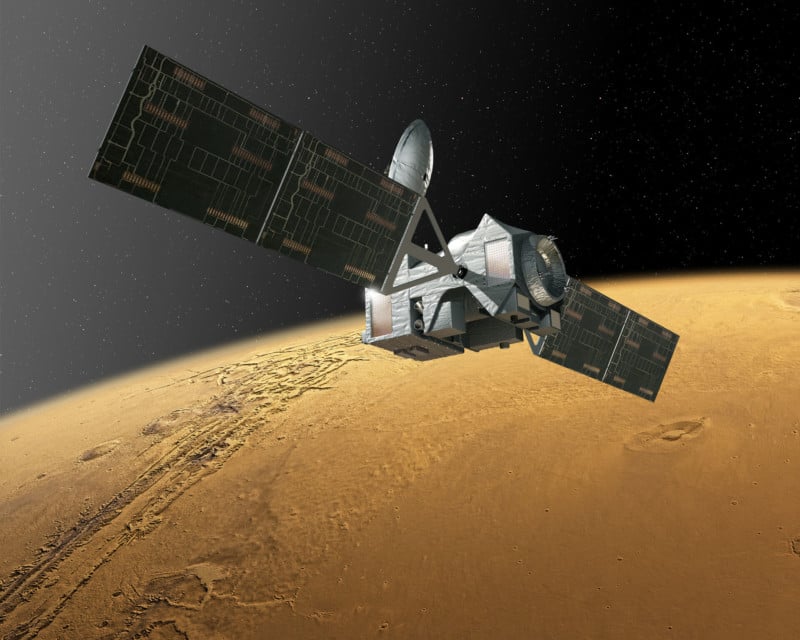 More stunning photos taken by Trace Gas Orbiter that it has captured since the beginning of its scientific mission in 2016, can be found by visiting the ESA’s website.