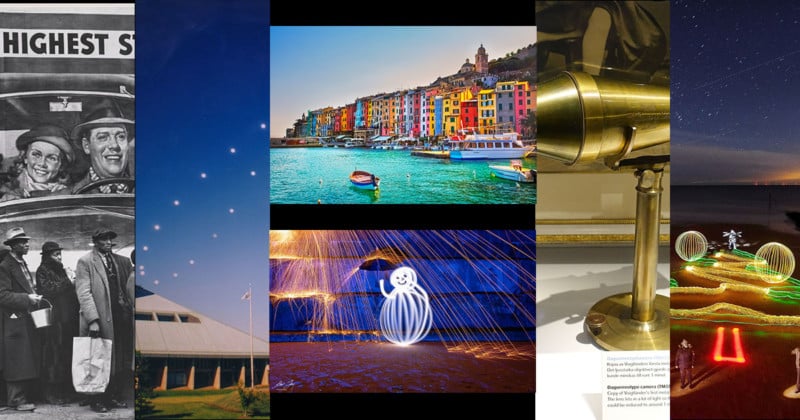 Photographer Kevin Jay, 50, is certainly using his light painting skills to spread digital Christmas cheer in his hometown of Clacton-on-Sea, England, and surrounding Essex County. He shoots at local landmarks to convey his holiday greetings.

“Light painting is my favorite area of photography, so I’m always trying to come up with new ideas to try, and holidays such as Xmas or Halloween always offer inspiration for themes and ideas to be created,” Jay tells PetaPixel. “Most of the work is done in real-time and created in one shot with very little editing apart from basic corrections.”

“Sometimes final photos are made up of a number of single shots like the Xmas scene which took several different shots which were then layered in photoshop,” adds Jay. “It would have taken too long to draw them in one exposure with the ambient street lighting. If it’s dark enough, I do like to do things in one shot as it feels more authentic that way.

“I get the most satisfaction from light drawing photography as it’s me creating the scene instead of landscape or portrait photography which I also enjoy, but, in those areas, you are capturing what is already there.”

Read also: These [Christmas] Light Painting Photographs Were Made Using an Automated Drone

How to Make Holiday Portraits with a DIY Christmas Tree-Shaped Bokeh Filter!

Pantone Unveils Color of the Year for 2022 — CNN

On Wednesday, it [Pantone] unveiled Very Peri, a periwinkle hue that the company says combines the steady tranquility of blue with an energetic infusion of red. It’s the first time the company has manufactured a color instead of delving into their pre-existing archive, a decision that was a vital element of this year’s selection process.

“It was really important for us to come up with a new color because we have a very new vision of the world now,” said Pantone Color Institute’s Executive Director Leatrice Eiseman in a video call.

“It is literally the happiest and the warmest of all the blue hues,” she added, describing the shade. “Because of that red undertone, it introduces an empowering feeling of newness, and newness is what we’re looking for.”

A Look at the Progression of the Canon Mirrorless Platform — LensRentals

Last October marked the 3rd anniversary of the Canon EOS R line of cameras and lenses.

“The initial announcement of Canon’s focus on their mirrorless platform was met with a lot of criticism, as the EF lens mount has become a staple in both the photography and videography worlds,” writes LensRentals. “But since that skepticism, Canon has done a lot of great things to propel their RF lens mount forward.”

What I Learned from Photographing my First Wedding – PictureCorrect

Sports photographer Walter Iooss Jr. shares the stories behind seven of his incredible images of athletes, including Michael Jordan (The Slam Dunk), 1988 and Joe Namath, 1969.

Notable: Walter Iooss Jr. (b. 1943) has photographed for Sports Illustrated for 58 years, including more than 300 covers.

Read also: The Story Behind an Iconic Photograph of Michael Jordan in Flight

Did Voigtländer have lens maker Petzval’s house burglarized to steal his lens designs and optical manuscripts?

Check out the answer as Dr. Roger Cicala tells sordid tales of photographic lens makers of yore in his inimitable style of recounting history at the link above?

Were 48 Pictures of the Sun Used to Make This Image? — Snopes

If a photo is taken of the sun from the same position and the same time of day many times throughout the year and then composited, it will be found that the sun follows a roughly similar path to figure eight. This path or shape is called an “analemma.”

How Street Style Changed in 2021, According to Vogue Runway’s Photographers –– Vogue

Finding the Most Colorful Places in the World — Uswitch

Here is a list of the 20 most colorful locations around the world, using color dropping assessment, Google searches, and Instagram hashtags.

Liu Heung Shing worked as The Associated Press Moscow photo chief in 1990-1993. Liu and his AP colleagues won the 1992 Pulitzer Prize for Spot News Photography for documenting the Soviet collapse.

Do They Still Operate the Red Payphone Booths in England?

Hover your cursor over the photo for the answer.

2.) (b.) The focal length of the lens divided by the diameter of its opening

I like this photo because it kind of happened by accident. I was shooting the 149th Belmont Stakes in 2017 and had placed several remote cameras under the rail along the finish line area. My first goal was to get photos of the winning horse and jockey as they crossed the finish line.

I got photos of the winner, which all worked out fine, but as I looked at all the frames after, I noticed the last place horse named Patch framed perfectly, backlit in the back hoofs of another horse, with dirt flying everywhere, adding drama to the photo. Patch was a sentimental favorite because he had lost one of his eyes due to infection yet still ran the race that day.

Ahead of the race, I strung several remote cameras together with a hard line that was attached to a foot pedal. As the race ended, I stepped on the foot pedal as the horses crossed the finish line and also shot with my handheld camera at the same time.

Remote cameras are always secondary to your handhelds. There is a bit of risk involved with using them no matter how much you prepare and set up and check and recheck your remotes throughout the day of a race because anything can go wrong. For example, your cameras can short out due to rain, the frames could be timed incorrectly, or the winning horse could finish outside of your frames altogether or show up out of focus.

While I say I was kind of lucky to get this shot, I’d also like to think I made my own luck in preparation for it. A lot of work was put into this photo, and I am glad it worked out.

When a big race is on, and the horses are coming at you all at once, it’s very exciting and very tense at the same time, and you hope to get a good shot of the wining horse with your remotes. The challenge with remotes can be the amount of gear involved while setting up across the track, especially if you have to access them during a race. You always have to be on high alert, not interfere with the races or get in the way. It can be very dangerous if you’re not careful.

Al Bello was a linebacker on his HS and College football team, and towards the end of college, he took a photo class. In 1993 Bello landed a position as a junior photographer at Allsport Photo Agency which became part of Getty images in 1998. Bello was the Chief Sports Photographer in North America from 2004-2019 at Getty. In 2020 he changed roles at Getty and is now a Special Sports Correspondent hoping to do more sport photo projects and help develop up and coming sports photographers. He will be covering his 14th Olympic Games this Winter in Beijing, China.

Quote of the Week – Edward Burtynsky

The above photo is from The Sony World Photography Awards’ Outstanding Contribution to Photography given to Edward Burtynsky for 2022.

Digital photography and Photoshop have made it very easy for people to take pictures. It’s a medium that allows a lot of mediocre stuff to get through.* – Edward Burtynsky

Edward Burtynsky (b. 1955) is a Canadian photographer known for his large-format photographs of industrial landscapes taken over 40 years. Early exposure to the sites and images of the General Motors plant in his hometown helped formulate the development of his photographic work. His imagery explores the collective impact we as a species are having on the surface of the planet, an inspection of the human systems we’ve imposed onto natural landscapes.

Image credits: All photographs as credited and used with permission from the photographers or agencies. Portions of header photo via Depositphotos, middle horizontal (bottom) snowman by Kevin Jay.