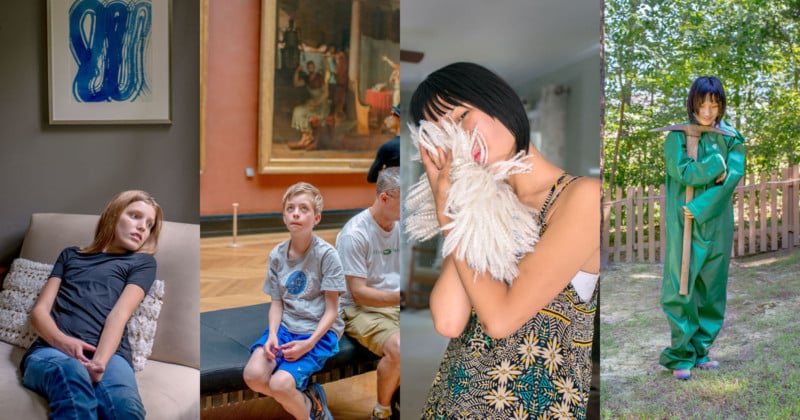 Photographer Mary Berridge’s Visible Spectrum offers an inside view of life with autism as told from within an autism community, including Berridge and her son.


“Photographs by themselves, however, are limited in how much information they can convey, so it was important to me to have narratives written primarily by the subjects or their parents accompany the photographs in the book,” says Berridge. “Together, the photographs and narratives create complex, multifaceted and often surprising ways of seeing autism.”

Berridge prefers natural light and follows the advice of her graduate school professor, the late Richard Benson: “The biggest, best light is the one that’s in the sky.”

We interviewed Berridge to learn more about her life and work.

Phil Mistry: What is the most challenging part of photographing people with special needs?

Mary Berridge: The hardest thing is depicting subjects in a way that doesn’t stereotype them or feel like a cliche. This was a delicate balance for me because, ideally, I wanted the photos to allude to autism on one level but without being reductive.

Should the photographer try to capture the subject’s particular traits or just capture the image like any other portrait?

My priority was to make a visually strong image that would move the viewer emotionally and cause a shift in their perception about autism. Some of the portraits include autistic traits and some do not. As a group, the photographs refer to autism enough to underscore that as a main subject, but not so often as to limit their meaning to only that subject.

What does your son think about the photography, especially when he sees large prints of himself in galleries?

He has mixed feelings. He doesn’t love seeing photographs of himself, but he is also proud when he sees the photographs getting attention from figures like the first lady of Ukraine, the Attorney General of North Carolina, or major news organizations. He got a kick out of showing his friends pictures of himself on CNN.com and The Guardian.com.

Does photography encourage an alternate way of seeing the condition?

I hope my photography does. I think photography is a good medium for my project because it makes clear that most autistic people look just like everyone else and are capable of full lives doing many of the same things others do. It can also show that autism affects different people very differently.

What gear did you use?

I used a Nikon D800E [removes the “effect” of the optical low pass filter (OLPF) providing increased resolution in images] with a Nikon 35mm f/1.8 lens.

Would a phone instead of a large-sized camera be more suitable for this kind of photography?

I exhibit the photos at pretty large sizes, and a phone wouldn’t have anywhere near enough resolution to maintain the sharpness, fine detail, and smooth tonality that make a beautiful print.

What do you want your photographs to achieve?

I want them to cause viewers to rethink some of their assumptions about autism, especially but also about difference.

Did Dustin Hoffman’s academy award-winning performance in Rain Man (1988) as an autistic person bring about more understanding and acceptance?

I think for its time, when the public knew almost nothing about autism, his portrayal did bring about some understanding because he convincingly embodied some of the main autistic traits such as anxiety and a need for routine.

He was certainly a sympathetic character, and I think that did help on some level with acceptance. The downside of his memorable performance, though, is that the character was a pretty extreme example of autism and that became the public’s perception. People like that do exist, but most autistic people are not savants. Many do have amazing gifts and are very bright, but there is also a sizable number who are intellectually disabled.

Then there are also many who do not seem autistic and may not even know they are autistic but can struggle with some of the disabling aspects. Because their symptoms are much more subtle than Rain Man’s, they are not diagnosed and miss out on potentially helpful self-understanding and therapies.

Visible Spectrum: Portraits from the World of Autism is published by Kehrer Verlag.