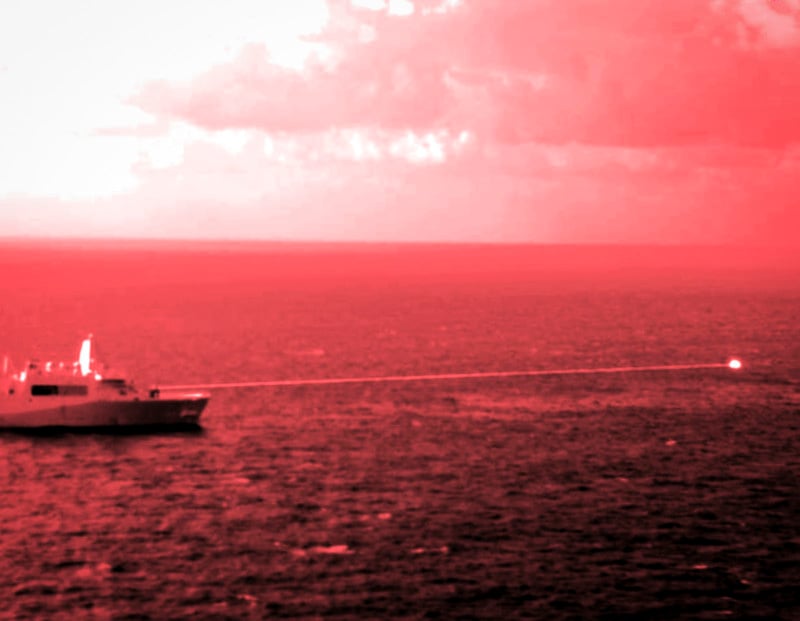 The US Navy has shared photos and videos of a powerful new laser weapon system that it has been testing to take down both drones and small crafts.

The latest reddish photos were captured with a special camera equipped with a short wave infrared lens and an optical filter, and they show the amphibious transport dock ship USS Portland firing the laser on December 14th at a training target on the surface of the Gulf of Aden in the Middle East.

The weapon is called the Solid State Laser – Technology Maturation Laser Weapons System Demonstrator Mark 2 MOD 0, and it successfully engaged the target during this week’s tests. During a previous test in the Pacific Ocean in May 2020, the laser successfully disabled a small drone, as can be seen in this short 14-second video:

The US Navy says that this new laser system could be used to protect its ships from autonomous threats from both the sky and the sea, including drone boats loaded with explosives used by Houthi rebels in western Yemen along the Red Sea coast.

“Laser weapons are powerful, affordable and will play a vital role in the future of naval combat operations,” Rear Admiral Matthew Klunder of the Office of Naval Research Klunder said in 2014. “We ran this particular weapon, a prototype, through some extremely tough paces, and it locked on and destroyed the targets we designated with near-instantaneous lethality.”

Directed Energy is the future of our @USNavy. Well done #USSPortland. https://t.co/w0oq02yAev

After the latest test, Chief of Naval Operations Admiral Michael Gilday Tweeted that “directed energy is the future of our US Navy,” so combat photos of the future may look more and more like the science fiction of the past.

Image credits: All photographs courtesy the US Navy