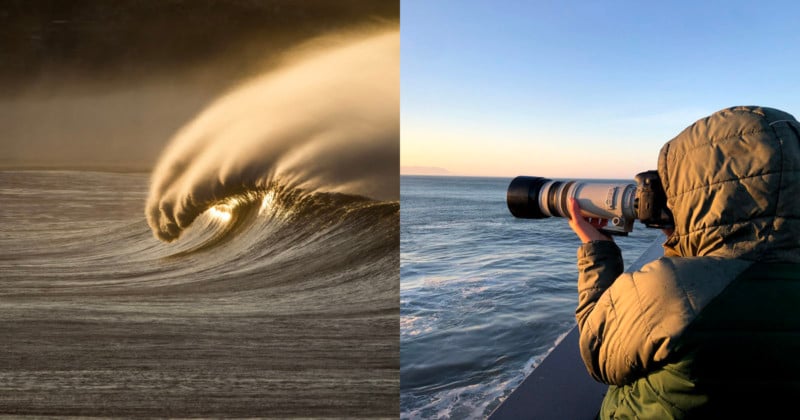 My name is Lance Wilson and I’m a 14-year-old nature photographer located on the Central Coast of California.

When the COVID-19 pandemic started, I was super bored and had nothing to do with my time. To counter that, I took up photography as a hobby. Since then I have become super obsessed with landscape, wildlife, astro, and surf photography.

I spend a lot of my time planning shots, taking shots, and editing shots. My dream is to become a full-time photographer. I also recently was awarded the title of Youth Photographer of the Year Runner Up in the Natural Landscape Photography Awards contest. I also do volunteer work for my local Surfrider chapter via social media.

Last winter, I captured a “golden wave” photo during the biggest swell I’ve ever seen — it was one of the luckiest moments I’ve ever had while doing photography.

The waves were 15 to 20 feet tall and the winds were coming from the east at probably 30 mph. I was there to get photos of surfers catching the big waves, but I wasn’t getting anything spectacular. Sure, the waves were impressive, but the surfers were surfing away from me, my positioning was wrong, and the lighting was mediocre at best.

Just as the sun grazed the top of a distant hillside, the entire scene turned golden. The sunlight hitting the waves looked incredible, but I really wanted to get a good angle on the “curl” of the wave.

In the distance, I could see a wave slowly forming in an odd location, a spot where none had formed previously. I zoomed my 200-400mm telephoto lens to 400mm, lined it up with the wave, and fired away.

The lip of the wave was fighting against the wind, enabling it to crash in almost slow motion. The strong gusts pushed water up and back over the top of the wave, creating a gigantic trail of salt spray behind it. Right after taking it, I knew it was “the shot”. This photo was really my first time having that complete satisfaction with a photo and the sense of accomplishment that comes with visualizing a dream photo.

After I shared this photo online, the amount of support I’ve gotten on the photo is insane — it was really my first time having anything “blow up”. It’s been a crazy but positive experience and many kind strangers have purchased prints of it!

It’s pretty amazing the impact one photo can have.

About the author: Lance Wilson is an award-winning nature photographer based in California. The opinions expressed in this article are solely those of the author. You can find more of Wilson’s work on his website, Instagram, and Twitter. You can also purchase prints, including of this wave photo, here.