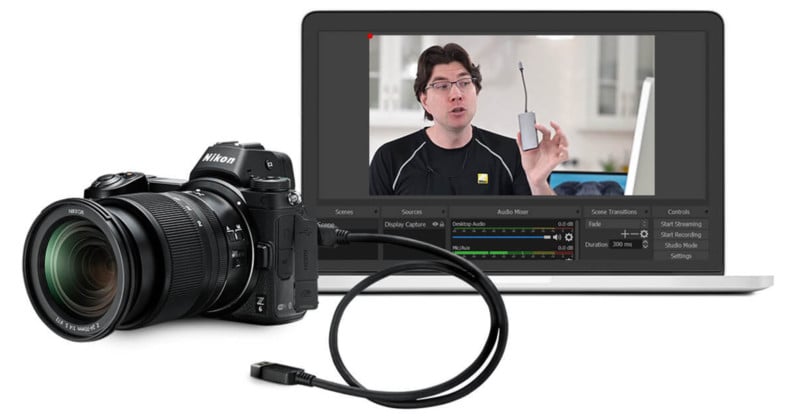 Following in the footsteps of Canon, Fuji, Panasonic, and others, Nikon has officially released a free Webcam Utility that allows you to use the latest Nikon mirrorless cameras and DSLRs as a webcam for video conferencing and live-streaming, without the need for a capture card.

As with the original releases from Canon and Fuji, the Nikon Beta Webcam Utility (version 0.9.0) is only available for Windows 10 for now. If that’s not an issue, downloading and installing the utility will allow you to use the cameras below as webcams over USB by selecting “Webcam Utility” as the output source in your video conferencing or live streaming app.

Compatible cameras include all of Nikon’s mirrorless cameras, including the new Nikon Z5, as well as the Nikon D6, D850, D780, D500, D7500, and D5600 DSLRs. Unfortunately, it seems Nikon’s most affordable entry-level D3500 is not compatible, and there are no compatible Coolpix cameras either.

Notably, there are a few limitations that Nikon wants to point out. In addition to the lack of Mac compatibility:

We’ve reached out to Nikon to find out if and when a Mac version of the app might be available, and will update this post if and when we hear back. In the meantime, it’s worth pointing out that Nikon has partnered with the third-party webcam software Ecamm Live to give users two months free, so it looks like they’re trying to tide people over until they can get their own Mac version sorted out.

To learn more, head over to the Nikon Live Streaming webpage or download the Nikon Webcam Utility and read the full release notes at this link.

UPDATE 8/6/20: Nikon responded to our request for comment, confirming that a Mac version is on the way. You can read their full statement below:

We are planning to release a beta version of the Nikon Webcam Utility software for Mac users. More information, including the release date, will be shared as it becomes available.