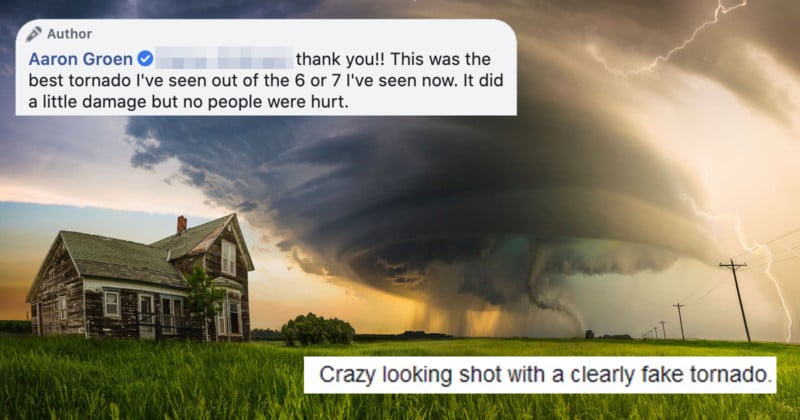 South Dakota photographer Aaron Groen is under fire from the storm chasing community this morning after a photograph of his went viral on Facebook. Groen says the photo shows “the best tornado I’ve seen,” describing how the raw files from the shoot still scare him. However, seasoned photographers and storm chasers alike are claiming that it’s “clearly fake.”

You can see the original Facebook post (still live as of this writing) below. As of this moment, it’s earned nearly 4K reactions, 930 shares, and 265 comments, most of them praising Groen’s bravery for capturing an incredible moment in time: 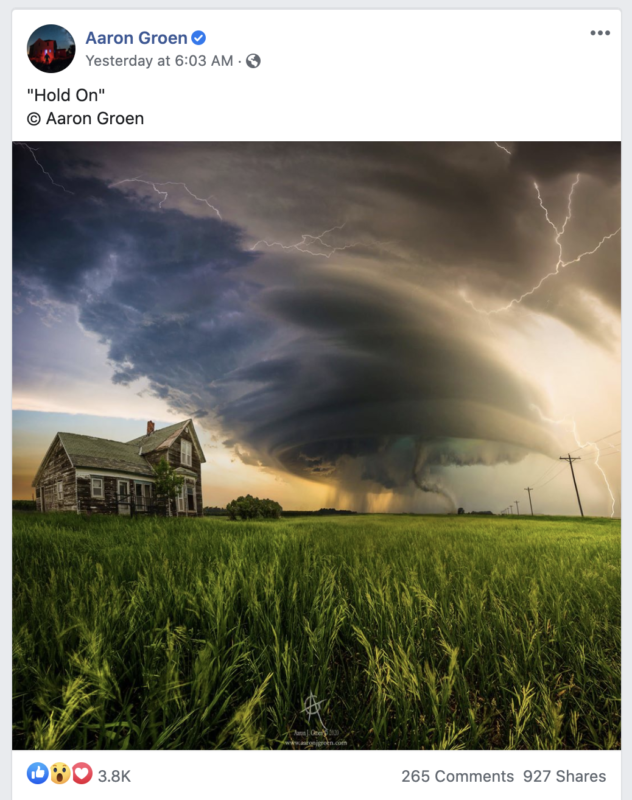 In response, Mr. Groen mostly thanks his fans. However, several of his comments seem to indicate that the storm was very real, did real damage, and was one of the most intense experiences that he’s had in his short time capturing such events: 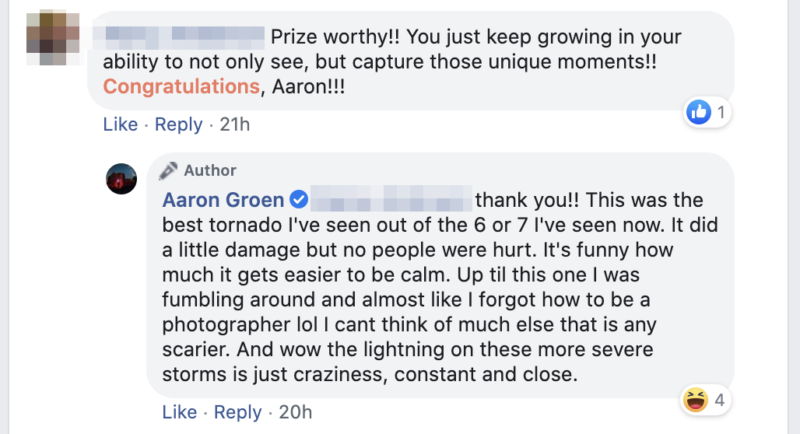 “This was the best tornado I’ve seen out of the 6 or 7 I’ve seen now,” he writes in one comment. “It did a little damage but no people were hurt […] Up til this one I was fumbling around and almost like forgot how to be a photographer lol I can’t think of much else that is any scarier. And wow the lightning on these more severe storms is just craziness, constant and close.”

However, as the photo has gained in popularity, multiple seasoned storm chasing photographers have gone public pointing out that this is “clearly” and “obviously” faked.

“This photo is going viral in the storm chasing community for being a fake photo. He has used the same photo of this storm for multiple composites before and brushed in this tornado,” one photographer wrote to PetaPixel. “The catch is not that it’s a composite it’s that he defends it’s real and tells people that there was even damage. A storm or tornado did not happen at this location at that time. Composites are one thing but false reporting extreme weather is a whole different thing entirely.”

Several others storm chasers and photographer have taken to Facebook to express similar sentiments: 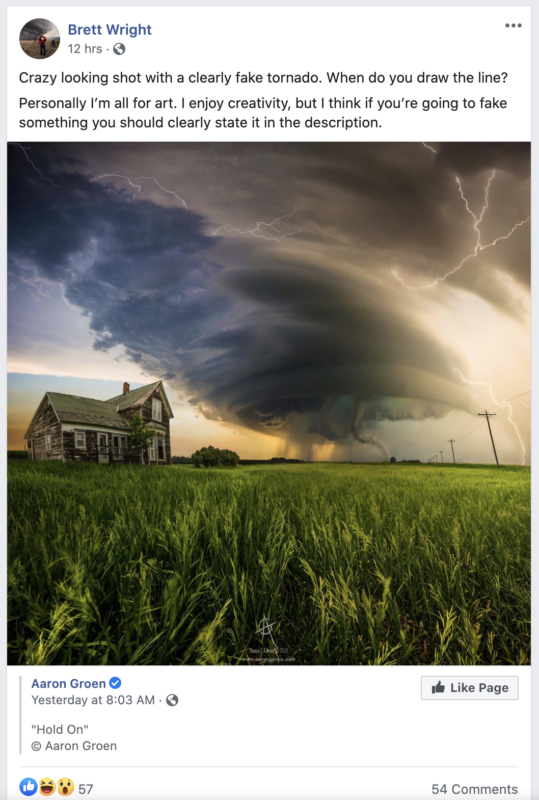 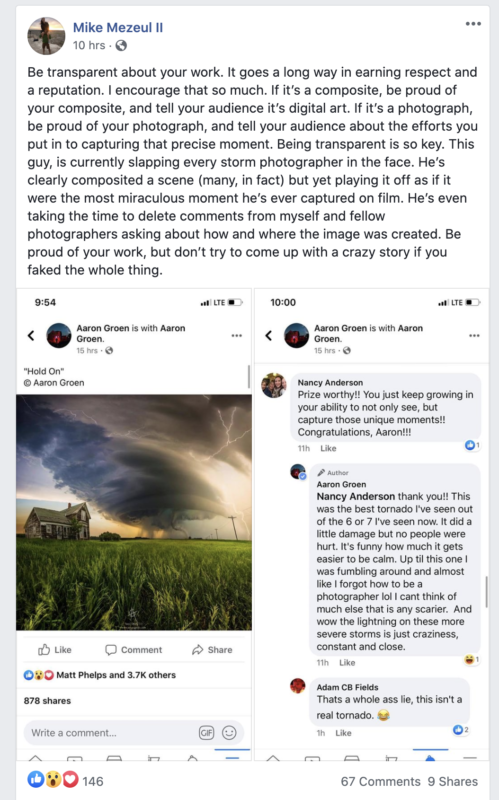 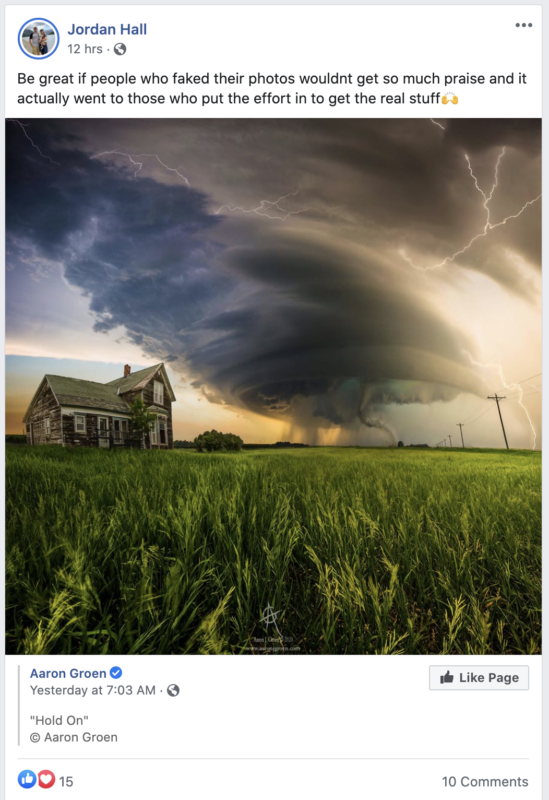 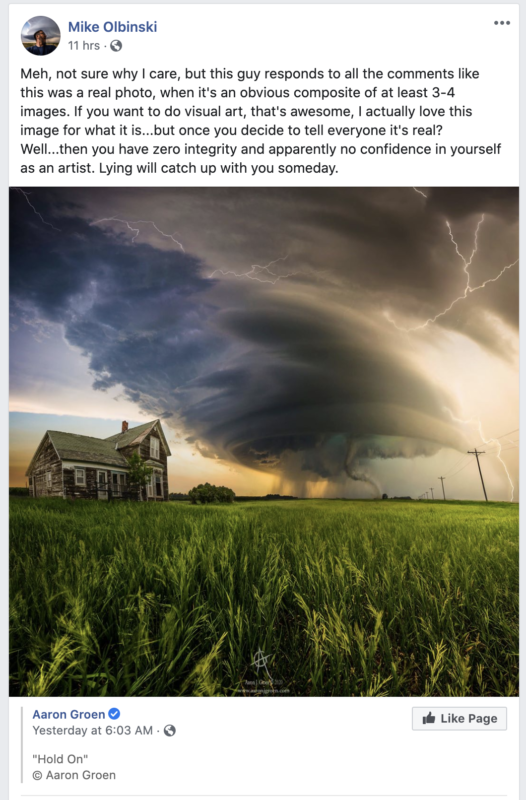 Another photographer sent us this triptych, claiming to show how a similar “storm” has been used in several of Mr. Groen’s fine art imagery:

As of this writing, we were only able to find one comment on Mr. Groen’s post that says the image is fake; however, based on the mentions above it seems many critical comments have been deleted and commenters are being banned. We’ve reached out to Mr. Groen for comment or explanation and will update this post if and when we hear back.