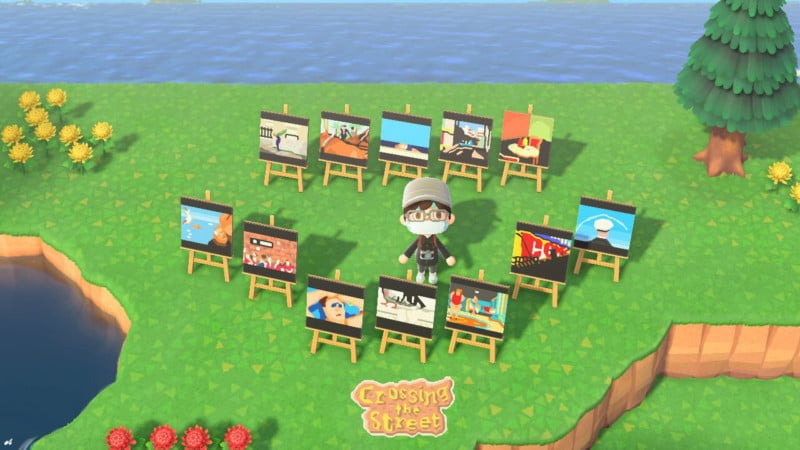 A couple of weeks into the coronavirus lockdown of 2020 and I’d noticed, among the many mentions on social media timelines of toilet paper shortages, sourdough fanaticism, and the essential viewing experience that is Tiger King, was a computer game called Animal Crossing: New Horizons.

The timing of the release of this game by Nintendo was fortuitous in terms of becoming part of the zeitgeist. It offered players some tranquility in an otherwise uncertain time, in the form of allowing you to set up your own island as you wish. You could plant gardens, build your ideal home (complete with furnishings you might never afford in the real world), find animals and fossils to donate to the local museum, or watch the weekly Saturday night concert from K.K. Slider (a dog, naturally).

While looking for creative things to do during the lockdown, and having already used the in-game design tool to draw my best-known street photograph ‘Lady in Red’, I decided it would be fun to create a virtual exhibition of some of my favorite street photography within the game.

Lady in Red Budapest 2016 As this is my 2000th post, I’ve decided to share what is still probably the best shot I think I’ve taken. I say ‘probably’, as I became very attached to it at the time, and it’s hard for me to know now whether I have a better one. Last year I went back to the exact same spot in the exact same bath in Budapest, as I was curious to see if I could replicate this. But no one as interesting appeared, and the arrangement & colour of towels just wasn’t as good. Which reassured me that this was a very lucky break at the time. Prints available at: michaelgoldrei.com/prints

How were the works chosen?

This was down to a combination of shots I love by some of my favorite photographers (and living ones at that, so I could gain their permission), and looking for work that is more graphical, bold, colorful and not so busy that it would become unrecognizable when rendered at such a small size.

Although they are all shots I’ve seen many times, it was an unexpected bonus that, by having to study them all in such detail, I noticed new features in many of them. Sometimes it was a person in the background I’d not previously seen (who, if they’re lucky, end up as a single pixel in my drawing), or a realization that certain colors repeat in different areas of the scene. These discoveries all enhanced my love of the original photos.

Background on the artist

I’ve been a street photographer since 2011 — you can read about me here. I’ve also been a graphic designer since 2001, my first job being for a UK-based computer games company. There I mostly worked on texture art for the original PlayStation, a process which wasn’t too far removed from what I’ve done here.

Nerdy stuff about the design process

The Custom Designs app is the in-game design tool for ‘Animal Crossing: New Horizons’. It’s fairly primitive in terms of what it allows you to do, giving a 32-by-32-pixel grid and color palette of 15 colors (the 16th is a transparent color, so of no use for these drawings). There are further colors available, but 15 is the limit per design.

The tools aren’t much more than a pencil, fill, line and a few shapes, and although the canvas used to draw on shows no anti-aliasing, the finished image creates smooth curves between diagonal pixels, so occasionally drawing pixels where you think they should go, gives unwanted results and the illustration has to be altered.

Despite all of that, I enjoy projects (photography, design, or illustration) where there are constraints on what can be done and, unlike any other design software I’ve used, I found that the audio within the tool proved to be useful.

My first experiment in creating these involved me shrinking a photo in photoshop to 32 by 32 pixels, but I found that the important subjects, objects, and background in the scene were almost impossible to distinguish, so these were created by me illustrating the scenes rather than simply using software to create them.

A limited number of in-game viewing appointments for the ‘Crossing the Street’ exhibition can be made by contacting me on the form on this page or emailing — note that a copy of the game is required for this.

The exhibition includes work by the following (who all gave their blessing to the project): Martin Parr, Matt Stuart, David Gibson, Niki Gleoudi, Niall McDiarmid, Julie Hrudová, Ken Walton, Michelle Rick, Francesco Sembolini, Marci Lindsay, Polly Rusyn, and Michael Goldrei.. Many thanks to all artists for allowing their work to be featured.

About the author: Michael Goldrei is a Vienna-based street and documentary photographer who originally hails from the UK. The opinions expressed in this article are solely those of the author. You can find more of Goldrei’s work on his website, Facebook, Flickr, and Instagram. This article was also published here.