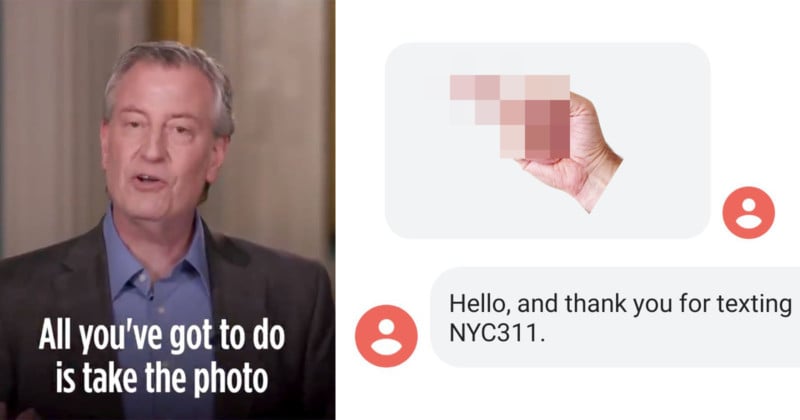 New York City’s mayor took to social media this past weekend to encourage New Yorkers to report each other for social distancing violations by snapping photos and texting them to a special tip line. The program has been highly controversial, to say the least, and the number was even briefly shut down due to the overwhelming flood of obscene photos being sent in.

Here’s the original appeal by Mayor Bill de Blasio, which asked citizens to photograph “people who need to get the message” and send the pictures in to the city so that enforcement can be called to the scene.

How do you report places that aren’t enforcing social distancing? It’s simple: just snap a photo and text it to 311-692. #AskMyMayor pic.twitter.com/WQdCcVf1Rl

People found violating the mayor’s social distancing and shelter-in-place rules can be hit with a fine of up to $500 for each incident.

The New York Post reports that the torrent of pictures being sent into Mayor Bill de Blasio tip line (311-692) included many “d**k pics” and photos of extended middle fingers.

“A barrage of prank messages forced the city to temporarily shut down its new text service that lets New Yorkers snitch on social-distancing violators,” the Post writes. “City Hall confirmed Tuesday that the 311 text line was shuttered to clear out a backlog of crank complaints on Sunday.”

On social media, there are many calls for people to send prank and protest photos to the number.

It’d be a shame if people just clogged that system with memes.

de Blasio is asking the public to snitch on anyone they see not following Corona rules by texting a photo to police…so a Twitter user reported de Blasio's undercover trip to a park 12 miles away from his Mayor's mansion 🤣😆https://t.co/SacjO95sfE

“The city has begun vetting everything before dispersing the information to precincts,” an NYPD source tells the Post.

Six Conservation Photographers Share What the Environment Means to Them