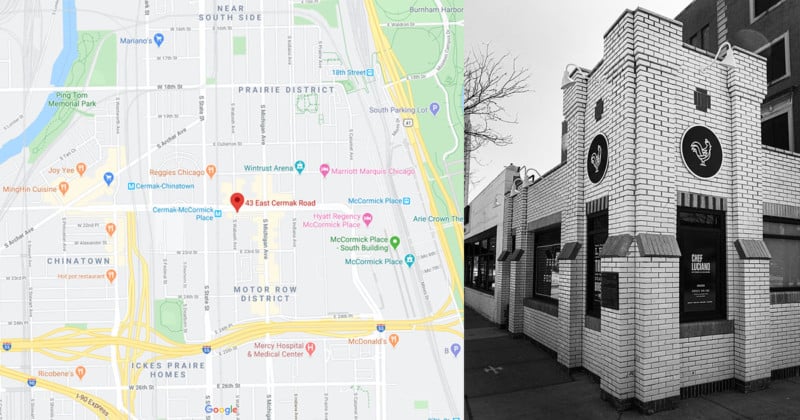 My friend Jon Gilchrist and I were talking about cabin fever and ways to stay active while also socially distancing during the ongoing coronavirus pandemic. He had the idea to come up with a route on Google Earth and Street View for me to bike and take a few pictures on.

He only gave me written instructions in an email and I avoided looking at any maps as I went. The east/west streets in Chicago are all numbered and I am familiar with most of the named north/south streets so it wasn’t hard to follow his directions. I would definitely recommend doing it mapless.

This is a gallery of photos from that trip. Jon’s instructions are in quotes.

“Head out onto 21st Street, turn East to Michigan, go a half block South. Take a picture of the historic company on the West side of the street.”

“Then go next door and take a picture through the fence and one of the sexy silhouette.” “Continue South to the end of the block. Turn right on Cermak and in a half block take a picture of the now-closed famous joint on the South side of the street.”

I think this is the most famous joint on Cermak here. Now this old White Castle houses the kitchen for Chef Luciano’s.

Nope, it was the Velvet Lounge. I had no idea it was all that old or closed.

“Continue West on Cermak and cross State street. On the South side of the street about 100′ past the intersection are some concrete barriers. If it’s safe, jump the barriers and go straight South on the now-abandoned road. There might be interesting things along this road, take some pix if you see anything. If it’s not safe, continue down the block to the National Teacher’s Academy and work your way South through their walkways and parking lots. Either way, make your way to the intersection of Federal and W 23rd.”

This area is a pretty barren park now but there is a great view of the historic Hilliard Apartments. Built in 1966, the cylinder towers were designed for seniors and the curved towers for low income housing. They were designed by Bertrand Goldberg. He also designed Marina City.

“Go South on Federal. The land between Federal and the train tracks seems to have been something at some point. See if you can see any interesting foundation remains. According to Google Maps, Federal may be closed. But the North end of the empty land seems to be open and accessible. If you find your route blocked, wing it.” Didn’t see any building remains but I did see some interesting trash.

“Go South on Federal. The land between Federal and the train tracks seems to have been something at some point. See if you can see any interesting foundation remains. According to Google Maps, Federal may be closed. But the North end of the empty land seems to be open and accessible. If you find your route blocked, wing it.”

Didn’t see any building remains but I did see some interesting trash.

“Work your way back to State, head South to 27th then back West on 27th. There’s a taxi company parking lot at 27th and Dearborn with lots of red cars. Might be an interesting picture there.”

This is no parking lot, it’s a tomb….

“Take Federal back up to 26th, then West to Wentworth and North through Chinatown.”

There are all too many boarded up storefronts here.

“Go West into Ping Tom park. Get up close to the railroad bridge and take some pix, then head to the North end of the park and see if there’s anything new up there. Take some pix of the St. Charles Air Line bridge while you’re there.”

The only entrance is locked up…

“Depart Ping Tom whenever you feel like it, and head out 19th and up Wentworth to 18th.” “East on 18th to Indiana and South a bit to the Henry B. Clarke House. Take a touristy picture of it.”

“If the gates are open, take a walk through the gardens. They look pretty interesting and photogenic.”

“Work your way over to The Battle of Fort Dearborn park at the corner of S Calumet and E 18th. Learn you some history.”

There’s some history but not much else in this park. The entrance to lake front trail is next to it though, so I took a 4 mile detour down the lakefront.

“Take 18th back to Indiana, go North under the train bridge and turn Right on 15th Place. Down at the end there’s some more history. See what Mark Twain was all about.”

Mark Twain was pretty cool but you won’t find any info about him in this park. Just a jungle gym.

It was an interesting and enjoyable experience. I discovered some new locations and revisited some old favorites. I could see similar projects being quite enjoyable for others either planning a route or following one.

About the author: Michael Banks is a photographer and lighting designer based in Chicago. The opinions expressed in this article are solely those of the author. You can find more of Banks’ work on his website. This article was also published here.