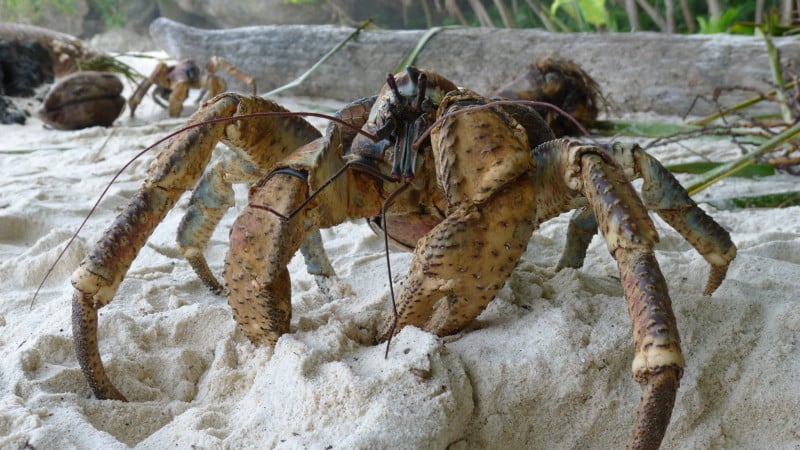 A researcher on Christmas Island—an Australian Territory in the Indian Ocean—is losing thousands of dollars worth of camera gear to theft and vandalism. But it’s not humans that are to blame, her gear is being stolen and destroyed by the aptly named ‘Robber Crab,’ the world’s largest arthropod.

Robber Crabs, also known as Coconut Crabs, are extremely common on Christmas Island, and they’re known for being both huge and curious. A full-grown crab can be over 3ft wide and weigh as much as 9lbs, and they love to drag interesting objects away into the forest for closer inspection.

According to ABC News AU, this is what happened to Western Sydney University PhD candidate Annabel Dorrestein, who recently lost a very expensive thermal camera to the curious crustaceans.

Dorrestein says the crabs have been dragging away her cameras and other gear ever since she started her research on the island. If she catches them in the act, they drop their quarry and run away, but this time the theft happened in the middle of the night and the crabs got away with a thermal imaging camera worth almost $4,000.

Despite searching for hours and finding plenty of Robber Crabs hanging around, Dorrestein and her friends haven’t been able to retrieve the camera.

We’ll be keeping our fingers crossed that they do find it, especially since it may have captured its own theft before being ripped apart from the battery. In the meantime, there’s plenty more animal-camera-theft footage to keep us entertained.