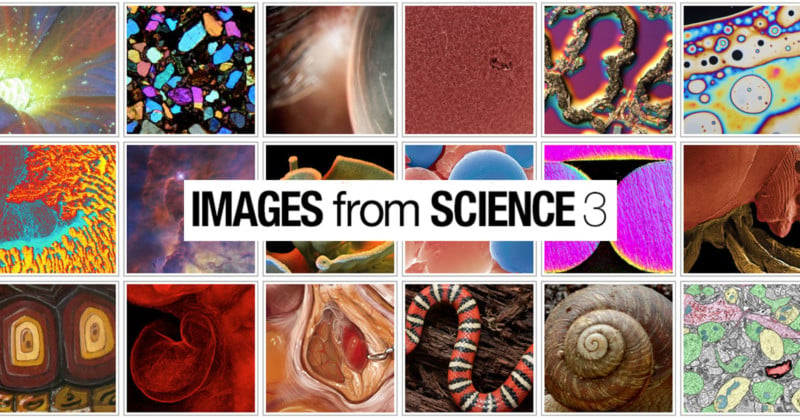 Johns Hopkins University and the Rochester Institute of Technology recently announced Images from Science 3 (IFS3), a collection and international touring exhibit of the best and most thought-provoking images curated from the fields of astronomy, medical photography and illustration, material sciences photography, and related industries. Scientific images, unlike most other genres of images, rarely find their way into art.

The IFS3 Exhibition is the result of a collaborative experiment that initially began in 2002 at the Rochester Institute of Technology. It shows what is possible utilizing the Internet as its primary voice to identify the world’s most striking scientific images — originally produced to chronicle science in new and beautiful ways.

Unlike the first two exhibitions, IFS3 includes not only both still and moving pictures, but also animations and illustrations. In total, submissions from 15 countries were received and more than 80 images were selected by 7 judges for this collection.

The role of photography in science has been a largely overlooked story in the literature of photographic history. Part of the story told well is the consequential role of nineteenth-century scientists in developing the early building blocks of the medium—optics, chemistry, camera technologies, and the theories of light and color. They, along with artists and enterprising promoters, instinctually understood the possibilities of photography for seeing the unseen, whether in the far-flung reaches of the celestial skies or in the molecular functions and structures of human and natural life. As a result, early science photographs, including the first photograph of the moon, taken by American scientist John W. Draper from his observatory in 1840, and the first X-ray image by German physicist Wilhelm Röntgen in 1895—among many other “photo science firsts”—held persuasive and pervasive power in advancing new avenues of scientific discovery and profoundly influencing the course of human knowledge.

The story of photography’s role in science has continued unabated from then to now, and at an ever-quickening pace and with increasing cultural importance. From picturing the invisible realm of human DNA to exploring the rings of Saturn or viewing Earth’s global warming, photography and science are indispensable partners whose evolving story continues to shape the ways we know ourselves and our seen and unseen world.

A selection of some of the collection’s images including some details about the techniques used can be seen below:

To view more information, an exhibition schedule, and to see the complete gallery of spectacular images, go to the IFS3 Website.

About the author: Bob Rose has more than 35 years of experience in the industry as a photographer, educator, and consultant. He is currently Editor-at-Large for Photo District News and Rangefinder, an Assistant Professor of Photography at the Rochester Institute of Technology, and is the most recent recipient of the Chuck Westfall Technical Education Award.