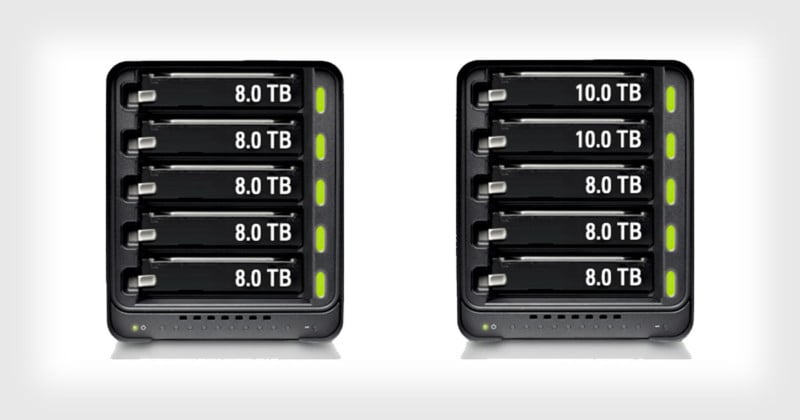 What do you do when your NAS/RAID/DAS is almost filled up and you need more storage? The answer probably isn’t what you think… Some DAS and NAS, like those from Synology and Drobo, let you replace smaller drives with larger drives to “add capacity.” But doing that doesn’t necessarily give you access to a meaningful amount of additional storage.

You can see how this works by playing around with the capacity calculator on the Synology or Drobo websites.

What you’ll see is that in a system with five drives of the same size, you actually have to replace at least two drives to increase available storage, or three to four drives if you are using dual-drive redundancy.

Once you’re replacing three drives, you are basically replacing 60% of your drives. Replacing four drives and you’re basically building a new RAID. You aren’t gaining much storage by doing that in most instances, as you can see on the capacity calculator. Plus, pulling a drive with years worth of life in it just doesn’t make economic sense either unless you have another use for it.

So unless you have a use for your “old” drives, you might be better off just adding another NAS/RAID/DAS to your storage system.

But wait, why not just replace those old small drives with really big new drives? You can do that, but it might cost you big time. The largest capacity hard drives don’t always offer the best price per TB value.

There is a sweet spot in hard drive pricing. Currently, the sweet spot is for 6-10TB drives. Larger than that and you pay a significant premium per TB of storage. Using 12TB or larger drives to upgrade your existing NAS/DAS will cost you more money overall.

Because 14TB drives are more expensive per TB, you could actually buy two of the 8TB NAS setups for less than one 14TB setup, and get more total storage in the process.

In many cases, buying a new NAS/DAS/RAID box and drives is a better option than replacing the drives in your existing setup. Of course, every setup is different, so you’ll have to run the numbers for yourself.

Another aspect to consider is the life left in your NAS/DAS/RAID case. While modern electronics can be very long-lived, I’d consider a drive case a 5-year wear item. After 5 years, not only has technology advanced significantly, you’ve also probably used up the best years of any electronic device.

So at a certain point, putting hundreds or thousands of dollars in new drives in an old case just doesn’t make sense. Downtime and failures suck and aren’t worth the risk on a large archive.

My closing thought is that storage is like LEGOs. There are countless ways to put together a system. This is just one way to think about solving a storage problem. In the end, what matters is that the solution you choose meets your performance and cost expectations.

About the author: Rich Seiling is the guy his friends call when their hard drive crashes and they need to be rescued. The opinions expressed in this article are solely those of the author. He has successfully stored about a million photo files for ~20,000 of his fine art printing clients. Check out his workshop and blog at CraftingPhotographs.com and RichSeiling.com