An engineer has developed a computer program that can, in her words, “remove the water” from an underwater photograph. The result is a “physically accurate” image with all of the vibrance, saturation and color of a regular landscape photo.

The technology, called Sea-thru, was developed by oceanographer and engineer Derya Akkaynak while she was a post-doctoral fellow under Tali Treibitz at the University of Haifa, and it has the potential to revolutionize underwater photography. While “remove the water” isn’t the most scientific explanation for how the technology works, as you can see in the Scientific American feature above, that’s more or less what it does.

By automatically removing the color cast and backscatter caused by the way light moves through a body of water, she’s able to capture underwater landscapes as they would look to the human eye on dry land—in other words: if all the water were gone.

Akkaynak and Haifa created Sea-thru by capturing “more than 1,100 images from two optically different water bodies,” each of which include her color chart. These photos were then used to train a model that compensated for the way light is both scattered and absorbed by water.

“Every time I see a reef with large 3D structures, I place my color chart at the base of the reef, and I swim away about 15 meters,” explains Akkaynak. “Then I start swimming towards the reef, towards the color chart, and photograph it from slightly different angles until I get to the reef.”

Once trained, the color chart is no longer necessary. As Akkaynak helpfully explained on Reddit, “All you need is multiple images of the scene under natural light, no color chart necessary.”

This sample image, published alongside the research paper explaining this technique in detail, shows you just how incredible Sea-thru really is: 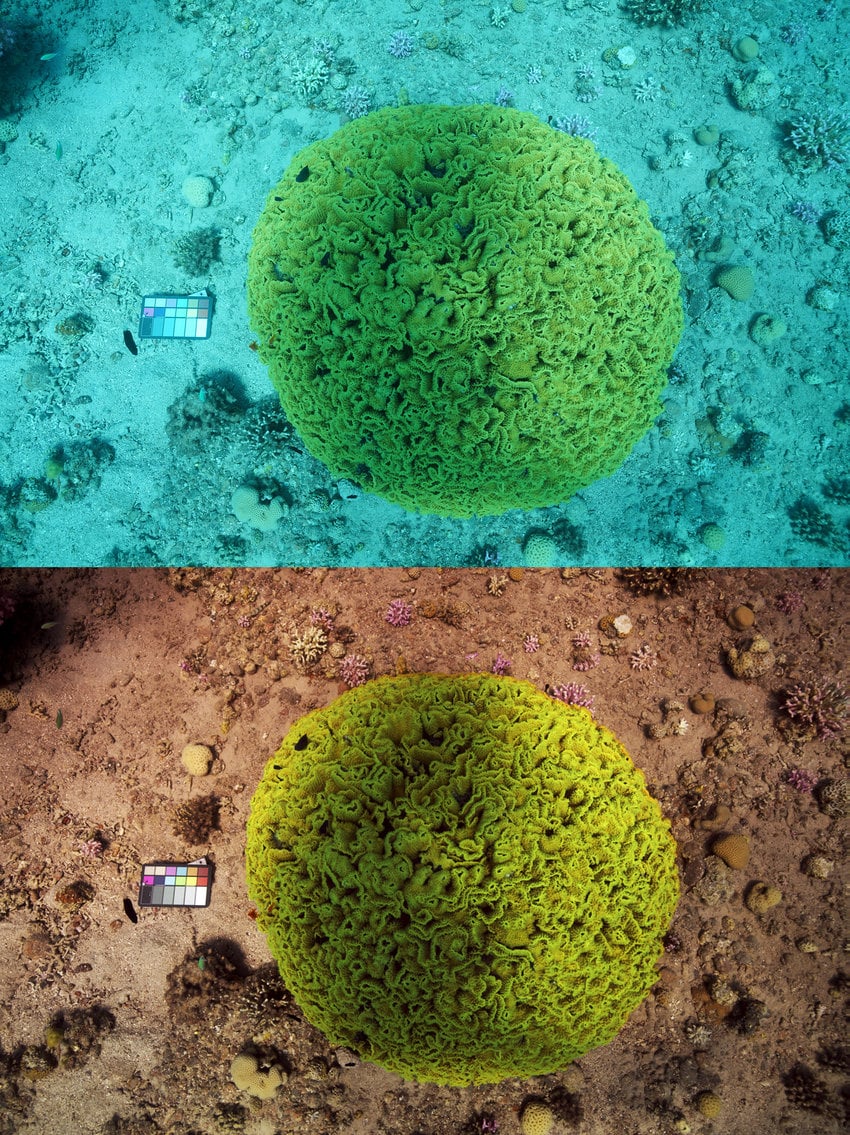 To be clear, this method is not the same as Photoshopping an image to add in contrast and artificially enhance the colors that are absorbed most quickly by the water. It’s a “physically accurate correction,” and the results truly speak for themselves. And while this technology was developed with an eye towards scientific uses, we can only imagine the results it would produce if shared with incredible National Geographic photographers like Paul Nicklen…

To see the algorithm in action and learn more about how Akkaynak was able to achieve this, watch the Scientific American feature up top. And if you want to dive into the nitty gritty of how this algorithm was developed and how it works, you can read the full research paper on Sea-thru here.