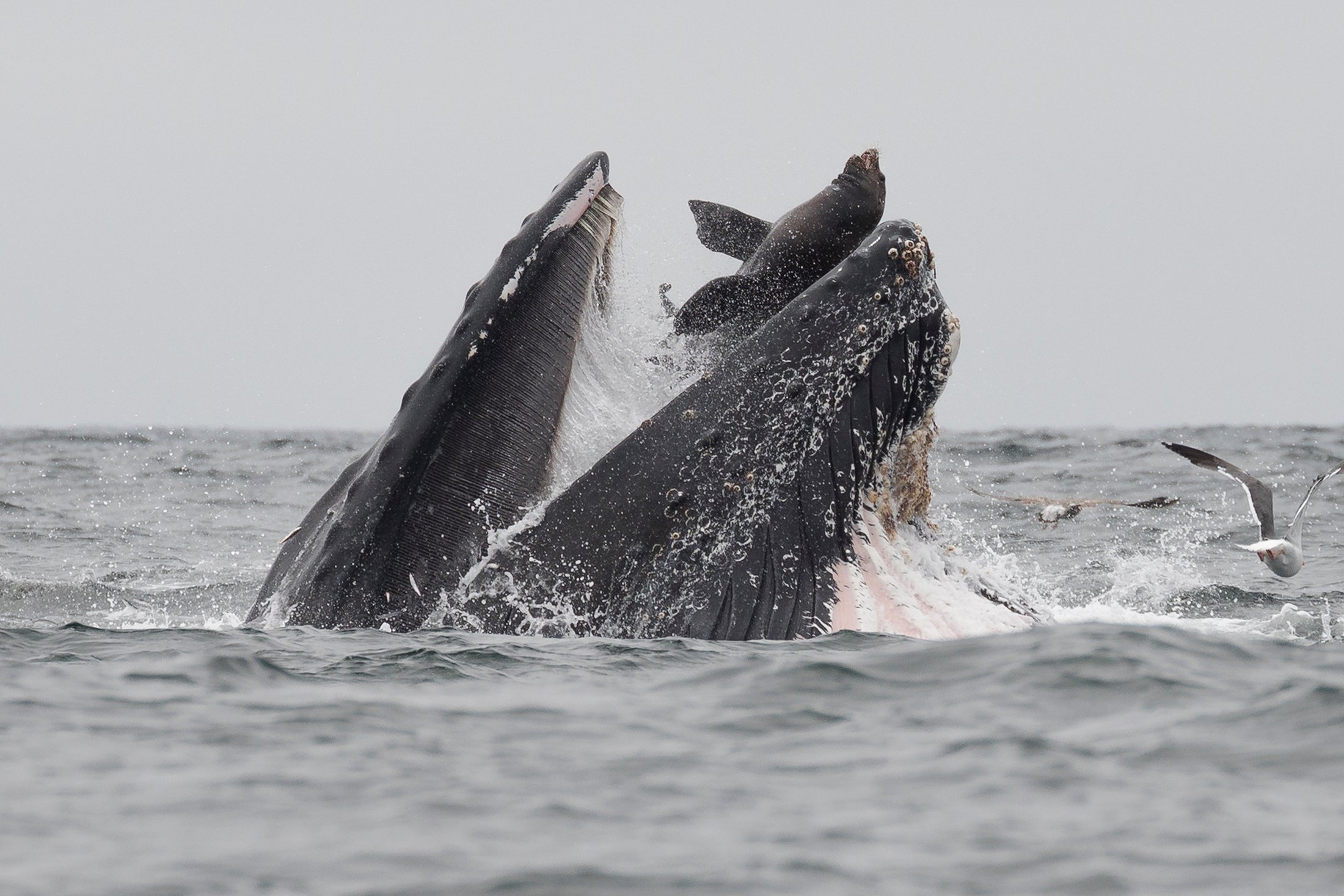 Last month, wildlife photographer Chase Dekker captured an incredible moment on camera. While he was photographing humpback whales lunge feeding on Monterey Bay, he captured the moment when an unlucky sea lion got trapped inside a whale’s mouth.

Dekker has been photographing these kinds of feeding frenzies for years, but he tells PetaPixel that he had never seen anything like this.

“Typically what happens is the sea lions are at the surface as they don’t dive as long and as deep and when the whales start racing up to the surface to lunge and catch the fish, the sea lions can see, hear, and sense them coming and jump out of the way,” explains Dekker. “Occasionally, you’ll see a sea lion riding the wake of a lunging whale or maybe bumping the side, but nothing like this.”

They were photographing 3 humpback whales feeding with about 200 sea lions when the moment happened.

“It was looking like a routine feeding event as we began to see the sea lions jump out of the way, which means the whales are 2-3 seconds behind (good warning system for us shooting),” recalls Dekker. “When the whale came out I immediately saw the sea lion at the tip of the mouth as it began to fall in. Typically when the whales lunge feed at the surface, they close their mouth almost immediately to trap the fish as they sink back down into the sea. This whale kept its mouth wide open the whole way down as I am positive it felt the sea lion bumbling around its mouth.”

In case you’re wondering, everything worked out okay for both the sea lion and the whale.

“The whale was feeding again just a few minutes later and we never saw an injured sea lion nearby,” Dekker tells PetaPixel. “Since the humpbacks are a baleen whale and lack teeth, nothing would or should harm the sea lion, especially with their thick skin and fatty blubber layer.”

As for how the experience affected him as a photographer, we were curious if this little bit of “viral” fame had any impact. We all wish we could capture an incredible moment like this and have the photo go viral. What’s that experience actually like, we asked.

“Having the image go viral as been quite the trip. I have had other photos do well, but nothing has blown up on this scale,” says Dekker. “The floods of emails and calls I was receiving became so overwhelming I couldn’t even focus at times! In the end, it has been amazing to see so many people interested in this photo and I love that it has done so well.”

Dekker is no stranger to capturing beautiful wildlife moments on camera. To see more of his work, check out his website or give him a follow on Instagram.

Image credits: Photograph by Chase Dekker, licensed for editorial use.

This Photographer Shoots ‘Lord of the Rings’ Scenes on a Tabletop