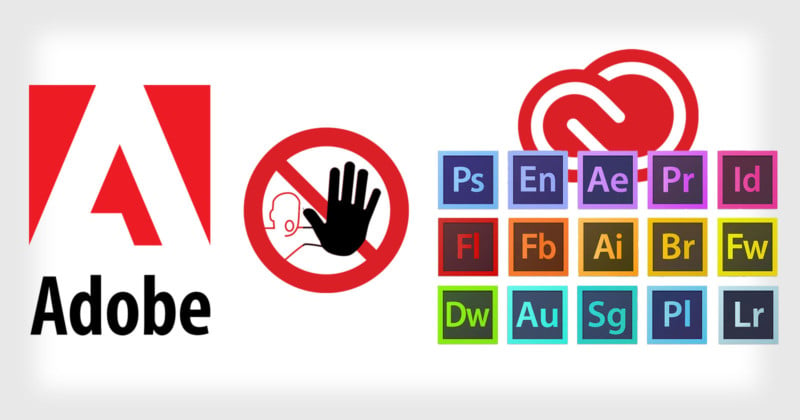 Adobe announced last week that older versions before the latest two major releases of its subscription apps would no longer be available for download through Creative Cloud. But that’s not all: Adobe is also warning customers that using older “unauthorized” versions could get you sued.


While the new limit to two major versions was announced on Adobe’s blog, the warning about legal issues was sent out directly to certain customers. Here’s a copy one photographer received and shared with PetaPixel: 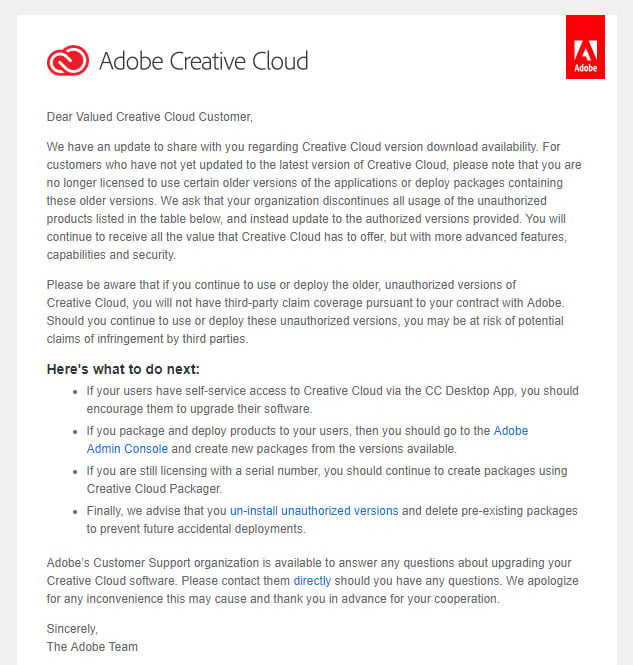 “For customers who have not yet updated to the latest version of Creative Cloud, please note that you are no longer licensed to use certain older versions of the applications or deploy packages containing these older versions,” Adobe writes. “We ask that your organization discontinues all usage of the unauthorized products […] and instead update to the authorized versions provided.”

Apple Insider points out that one third-party company that could have issues might be Dolby, which sued Adobe last year for copyright infringement — Dolby says that its negotiated licensing fee was based on discs sold and that Adobe hasn’t been transparent about its self-reported cloud sales numbers.

Adobe’s response to one unhappy customer seems to confirm that this is related to the Dolby case:

Customers who continue to use or deploy, unauthorized versions of Creative Cloud may face potential claims of infringement by third parties. We can not comment on claims of third party infringement, as it concerns ongoing litigation. ^CS https://t.co/wx2K8MXov9

Adobe is sharing the following table that shows which versions are okay to use and which are now unauthorized: 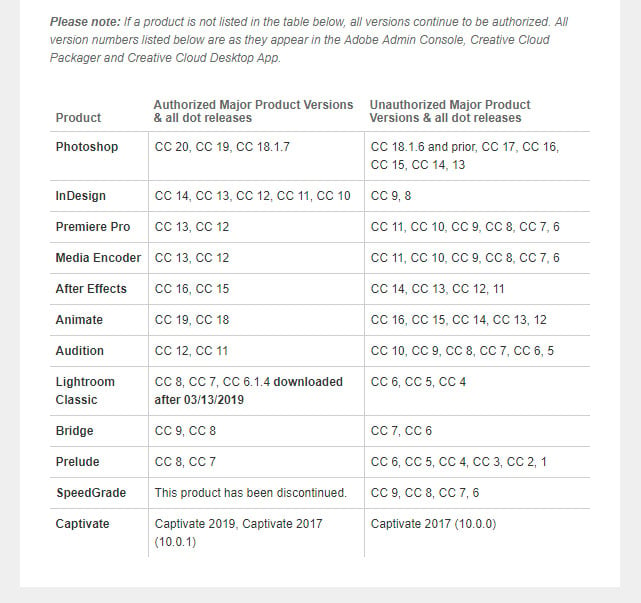 What’s interesting about this update is that in its original announcement regarding the limiting of versions, Adobe only explained that the change could allow it to focus on improving features, functionality, performance, and benefits.

“Focusing our efforts on the latest two major releases of Creative Cloud applications, which the vast majority of Adobe customers are already using, will further enable us to develop the features and functionality most requested by customers and ensure peak performance and benefits across Windows and Mac operating systems,” the company wrote.

But now it seems that legal licensing issues may have also quietly played a part behind the scenes. We’ve reached out to Adobe for further comment and clarification and will update this article if/when we hear back.

Adobe recently discontinued certain older versions of Creative Cloud applications. Customers using those versions have been notified that they are no longer licensed to use them and were provided guidance on how to upgrade to the latest authorized versions. Unfortunately, customers who continue to use or deploy older, unauthorized versions of Creative Cloud may face potential claims of infringement by third parties.