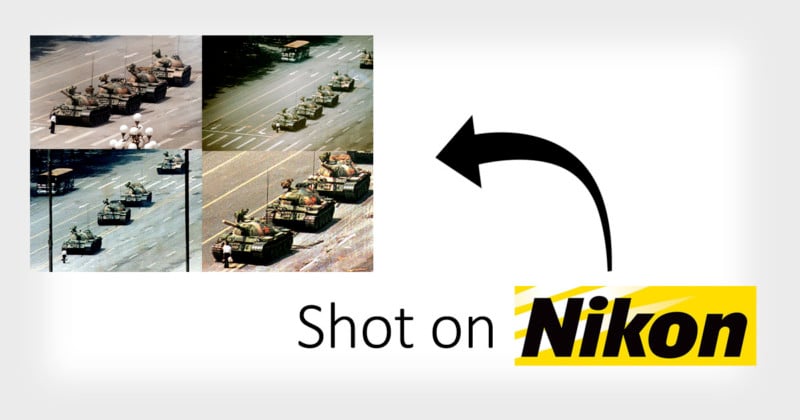 Leica was at the center of a firestorm of controversy in China earlier this month over a video that dramatized the creation of the iconic photo titled, “Tank Man”. Now it turns out that all the well-known “Tank Man” photos were actually shot with Nikon cameras.

The film depicts a photographer being confronted by angry Chinese government authorities as he works to photograph the 1989 Tiananmen Square protests from a hotel window.

“Without the passion and the vision of these people, no camera would make history on its own,” photographer and Leica rep Luiz Marinho tells Ads of the World. “Therefore, we felt that it would be fair and truthful to pay homage to them, since they are our eyes around the world.”

Leica’s logo is seen at the very end of the video.

But the video instantly resulted in outrage in China, with citizens slamming Leica on social media and the government quickly ordering a ban on the word “Leica” on social media.

The whole thing became a PR nightmare for Leica in a country that’s one of its biggest growth markets, and the company quickly distanced itself from the video, saying that it was unauthorized.

“[The video] was not commissioned, financed or approved by any company in the Leica Group,” Leica tells The Jakarta Post. “We expressly regret any confusion and will take further legal steps to prevent unauthorized use of our brand.”

But the ad agency refutes that claim, saying that it would never release anything without a client’s approval.

“F/Nazca Saatchi & Saatchi has worked for the representative of Leica in Brazil since 2012, developing content for several different media platforms for the client over this time,” the agency says. “The commercial ‘The Hunt’, launched in Brazil this week, is another among these works that we have developed together with this client and for which we have immense pride and are sure to have delivered a remarkable piece.

“F/Nazca […] would never harm its huge reputation by creating, producing and airing a work without the proper approval of its client.”

As Leica is scrambling to salvage its relationship with its Chinese customers (and their government), it has now been revealed that Leica cameras didn’t actually play a role in the creation of the famous “Tank Man” photos.

The prominent German news outlet Spiegel Online did some digging and discovered that all the photojournalists now-known for covering Tank Man had been shooting Nikon cameras.

Although “Tank Man” often refers to the most famous photo of the scene that was captured by AP photographer Jeff Widener, there were three other press photographers who captured the same moments from a Beijing hotel.

As an unidentified Chinese man stepped in front of a column of approaching tanks, Charlie Cole of Newsweek, Stuart Franklin of Magnum, and Arthur Tsang of Reuters were also snapping away.

All four photographers confirmed to Spiegel that they were shooting Japanese Nikon cameras rather than German Leica ones, and the photographers reportedly weren’t approached by Leica or the ad agency during the creation of the short film.

While the video got the camera brand wrong, the depiction seems to accurately show the lengths to which the photographers went to capture photos for the world’s eyes, as detailed in a New York Times article about the photographers’ stories published in 2009.

Cole was shooting from the same balcony as Franklin, and he hid his roll of film inside a toilet.

“I […] placed the tank roll in a plastic film can and wrapped it in a plastic bag and attached it to the flush chain in the tank of the toilet,” Cole told the Times. “I hid my cameras as best I could in the room. Within an hour, the PSB forced their way in and started searching the room. After about five minutes, they discovered the cameras and ripped the film out of each, seemingly satisfied that they had neutralized the coverage. They then forced me to sign a confession that I had been photographing during martial law and confiscated my passport.

“Sometime later, I was able to return to the room and retrieve the film […]”

Franklin’s photos were smuggled out of China by a French student inside a box of tea.

(via Spiegel Online via Canon Watch)

On the Value of a 365-Day Photography Project