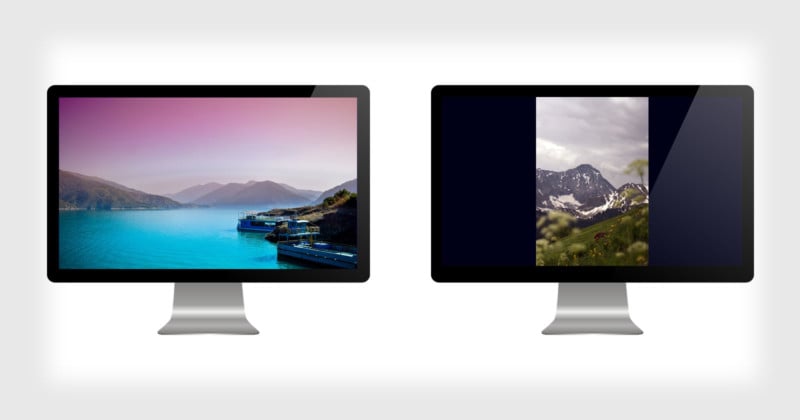 Life was pretty simple back then — photo aspect ratios were determined by either the paper or the film. Sure, we had to rotate each individual print to view them, which is now done for us automatically. Then we had to carefully position and mount them into an album, which is now also done automatically for us. If that weren’t enough, we had to store these relatively huge photo albums that can now be held in one hand or stored in a backpack.

For all of the convenience offered by digital displays, there is still one persistent problem that exists with electronic monitors when used to display photos and that is the size disparity between differently oriented images.

With minor exceptions, monitors are offered in two primary aspect ratios, 4:3 and 16:9. The 4:3, full-screen aspect ratio was chosen originally because it matched the standard television broadcasts of the time. When digital photography arrived on the scene, televisions were still CRT-based and far too bulky to even think about rotating, so it became common practice to simply downsize vertical photographs to fit on-screen (I’m certain the logic being, it was better to view properly oriented photographs even if they had to be downsized by nearly half the size of their horizontal counterparts).

Sometimes you just have to do the best you can with the tools available.

The current trend, again prompted by a change in the video broadcast standard, seems to be moving almost entirely toward the 16:9 widescreen format. This makes perfect sense because the older video format fits easily within the new wider displays and, for multi-purpose devices, it provides additional room for computer applications.

The problem with displaying digital photographs, however, remains unchanged. Maximum image size is still determined by the shortest screen dimension and there is still a nearly 50% disparity in size between horizontal and vertical photographs. As I stated earlier and want to reiterate, 16:9 displays are the only practical choice for video-only and multi-purpose devices!

My problem lies with devices, like digital photo frames and battery-powered digital albums or light boxes. Of all the display devices on the market, these photo-specific viewers should provide a superior photo viewing experience. They have no other purpose than to store, view, share and manipulate photographs. The very first problem makers should have addressed is the lingering conflict between display and image orientations that results in image downsizing.

To make matters worse, I see that the more expensive models of digital frames/albums are now offered almost exclusively in the widescreen format. Not only does this not address the image size problem, but the additional width is also too wide for horizontal photographs and way too short for verticals, so the result is more wasted screen space than on older 4:3 displays.

Apparently, photo-specific device makers feel compelled to include widescreen video in their repertoire, as if there are not enough video-capable devices on the market already. Oddly enough, in their transition from 4:3 to 16:9 they had to increase the surface area of the display by 25%, which accounts in part for the higher cost.

If instead of going wider they had added the same 25% in area to the height of the 4:3 displays, making them 1:1 square, full-sized images could be displayed in either orientation. A square display is not only more practical for photographs, but it is also a considerably more efficient screen shape for photographs than either 4:3 or 16:9 displays. 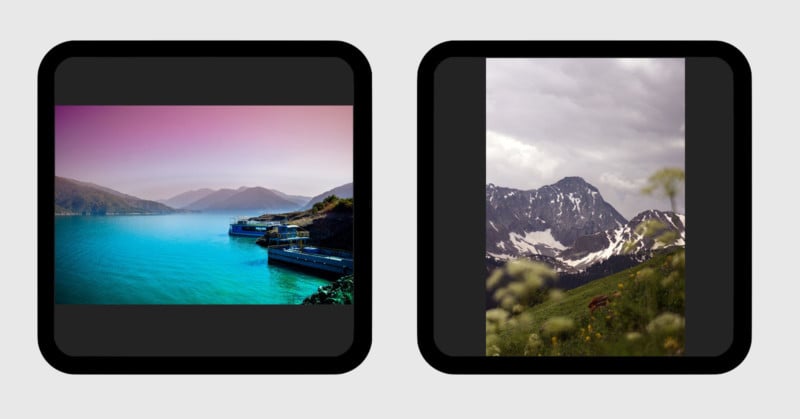 Additionally, a square display can be divided into a series of grids to display multiple same-sized, properly-oriented images. Since all photo aspect ratios are contained within a square, they can all be fit-to-screen or fit-to-grid utilizing as much display as they need, their size being determined by their aspect ratio, not the screen orientation.

Finally, since a square display essentially has no orientation, it can be held or mounted in any direction — no more rotating a device to view a larger image.

Other than being left with a bunch of less desirable stock, I cannot see a downside in switching photo-specific devices to a design that better serves their stated purpose. Unfortunately, unless manufactures see a demand, it is easier and less expensive for them to just do nothing.

About the author: Sal Ragusa is a lifelong photography enthusiast and a retired Air Force Master Sergeant. The opinions expressed in this article are solely those of the author. Ragusa was the owner and artist of a digital photo restoration business in the greater New Orleans area from 1998 through 2009. You can contact him here.

These Multiple Exposure Eye Photos Were Made Entirely In-Camera

How to Fake a Realistic Shallow Depth of Field in Photoshop