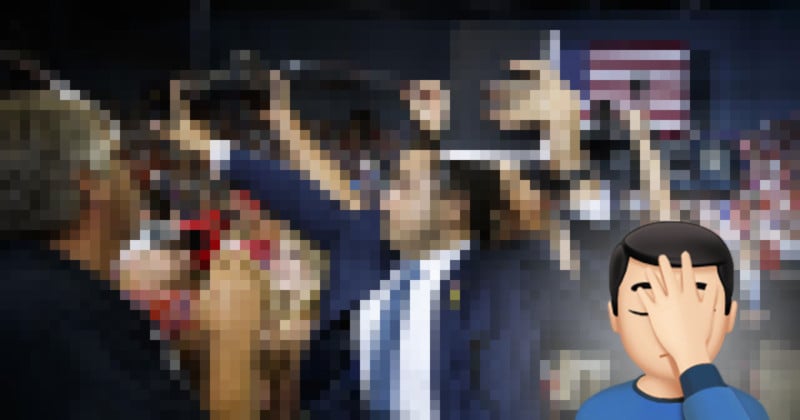 A volunteer at a rally for President Donald Trump reached out his arm last night to block a photojournalist’s camera as he tried to photograph a protester. Another photographer caught the move on camera, and today that photo-blocking volunteer has unintentionally become a viral news story.

This curious case of the Streisand effect — in which an attempt to censor something makes it publicized much more widely — is courtesy Evan Vucci, the Associated Press’ Chief Photographer in Washington.

Vucci was at the campaign rally in Indiana when a protester disrupted the event. He then spotted and photographed the advance team volunteer attempting to prevent the photo by sticking his hand in front of the DSLR’s lens.

“A volunteer member of the advance team for #president #donaldtrump blocks the lens of a photographer trying to take a photo of a demonstrator during a #campaign rally in #evansville #indiana,” Vucci wrote in the caption.

Volunteer member of the advance team for President Trump blocks photojournalist's camera as he tried to take a photo of a protester during a campaign rally in Indiana. Photo by @evanvucci. https://t.co/B8R3gGrOL5

Interestingly (and ironically) enough, Trump had strong words about censorship during the same rally.

“There’s a thing called free speech rights,” Mr. Trump said at the rally. “I’ve made it clear that we as a country cannot tolerate political censorship, blacklisting, and rigged search results.”

Trump: "We as a country cannot tolerate political censorship! We are not going to let them control what we see!"

Only moments before, a Trump aide had physically blocked the lens of a press photographer to prevent him from taking a photo of a protestor. https://t.co/eo7Wn8TARq pic.twitter.com/E7jdEuQCNq

It’s unclear whether the photo block was successful, but the volunteer’s attempt at suppressing news of the protester has backfired: the photo of him blocking the lens has gone viral today and is being published by major media outlets both in the United States and internationally.

Update on 9/4/18: TIME reports that the volunteer was Nick Barbknecht, a seasoned political operator who was assigned to “help journalists covering the event.” The photographer being blocked was Kevin Lamarque of Reuters, who has shared a resulting photo containing Barbknecht’s hand.

Trump’s campaign tells the White House Correspondents Association that Barbknecht was an “inexperienced volunteer, who understands that he acted in error” and “promises that this will not happen again.”

Histogram or Artistic Expression: What Matters Most?