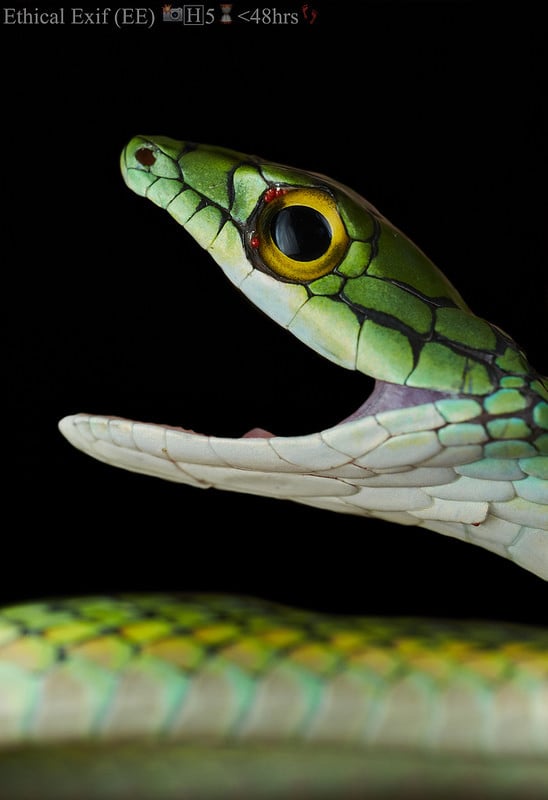 One of my least favorite shots from Sani lodge now serves as a constant reminder of poor practice to me. This subject was one of many subjects collected by Tropical Herping working on a photographic field manual of Herps in Ecuador. This parrot snake (Leptophis ahaetulla) was played with.


It was grabbed by the tail and gently swirled in circles. Then it was gently batted about the head, to engage in defensive gaping (an open-mouthed threat display). This occurs naturally to a certain extent, but with more stress, the defensive gape is held for longer.

There were more than 30 different individuals, each experiencing greater or lesser amounts of abuse, and all held in sub-standard conditions over the course of days. Held in plastic or cloth bags, they were stressed out, mishandled, at least one died to my knowledge, and at the end, they were translocated beyond where they were caught.

Although I wasn’t involved in the project (the guidebook) or capture, I still photographed some of the species and offered my logistical help to them on where they could find other species. It’s one of those unfortunate incidents which was an eye-opener for me, and really forced me to look at my own practices and question them, even small actions and arthropod subjects. They may appear small or insignificant, but it speaks to an overall respect for nature, and it can be a slippery slope into poorer and poorer practice.

The tacit approval I gave amounted to an endorsement and I consider myself as much to blame as those doing the collecting and abuse. These practices are rife within macrophotography, and one should not expect experience, professionalism or status to be an indicator of a person’s ethical standards. Always question whether something needs to be done and if it doesn’t, don’t support it and if it continues, speak up. These experiences helped mold and form my concept of Ethical Exif.

The respect with which we treat wildlife – whether it is a charismatic and emblematic species like the Jaguar, the common or under-appreciated backyard denizens, or even vilified pest species – our treatment is a reflection of us and our values. Nature, though wild, is a looking glass through which we can gaze upon our own humanity, a mirror to our human nature.

Ethics is a contentious and complicated subject, full of pitfalls and paradoxes, logical fallacies and fabrications. The ‘right’ course of action is often mutable, subject to situation and current social mores which not only differ from country to country but from one year to the next with the emergence or reversal of scientific data.

My stance on the matter, in brief, is transparency. Allow anyone viewing the photo to determine for themselves whether the ‘ethical specs’ of the photo align with their own personal standards by detailing the ‘behind the scenes’ treatment of the subject.

The symbols displayed below, or any variant thereof constitutes what I am calling “Ethical Exif” or EE. While EXIF information denotes the technical details of a photograph (aperture, shutter, ISO, flash fire, lens used, etc…) and is present as metadata embedded in the photo, the EE is meant to clarify the ethical standards used in the taking of the photo.

The elements which I have identified as being both relevant and important are as follows:

5. 👣: Translocation (Capture, transport, and release of a subject from one location to another)

6. 🎨: Use of cloning or extensive post-processing

: Playback (Used primarily in bird photography, the science is currently inconclusive as to the long-term impacts on behaviour)

The health scale uses the following criteria to determine the numerical 🄷 value:

🄷1: Subject is unaware of the photographer’s presence, engages in normal, undisturbed activity.

🄷3: Subject is aware of photographer’s presence and modifies its behavior as a result (no immediate physical harm).

🄷4: Photographer engages with the subject Eg. Manipulation of position, translocation to a studio environment, etc. but with no physical evidence of damage to the subject.

🄷9: Immediate unresponsiveness with manipulation, partial revival but with permanent loss of fitness.

Though one might perhaps strive for unobtrusiveness with a watermark, as is traditionally the case with signature identifiers, the purpose of EE is to convey information. Therefore it should be applied in a consistent, predictable and clear manner. To that end, I have opted to standardize the watermark’s position (top left), opacity (25), Scale (25), Colour (White or Black, depending on the background), and Font (Century).

EE takes the form of a watermark, because despite being intrusive, the watermark ensures that the message will remain intact regardless of the platform, and unlike a caption, which can become divorced from its image through sharing, and image copying, the watermark continues to provide some indication of methods of production, as well as provenance.

Furthermore, it will come as no surprise that the current means of ingesting media content (Snapchat, Instagram, Pinterest, Twitter, Facebook, etc.) encourages clicking without thinking. This means that captions often go unread and that a photo is evaluated based solely on its aesthetic, rather than its message. EE, therefore, attempts to bridge this gap and imbue the image with information related to its creation. Ultimately, the watermark is meant to remove the obstacle and the excuse of ignorance.

This EE has already evolved within a short period of time through several iterations. The story of the origin of Ethical Exif can be read in this 2017 Facebook post. The use of Emojis is useful to:

a. Enable a near universal understanding or inference of most of the symbols and their meaning where language may be a barrier

b. allow a shorthand notation where space is limited

d. Save time for the photographer when applying EE to their photos

This watermarked EE will be found on all of my most recent photos, with further expansion and explanation (when 🄷 value exceeds 🄷3) to be found within the caption, like the parrot snake photo introducing this section.

Feel free to contact me if you would like to adopt this standard with respect to your own photography.

About the author: Paul Bertner is a wildlife photographer based in British Columbia, Canada. The opinions expressed in this article are solely those of the author. You can find more of his work and writing on his blog, portfolio, Facebook, and Flickr. This article was also published here.