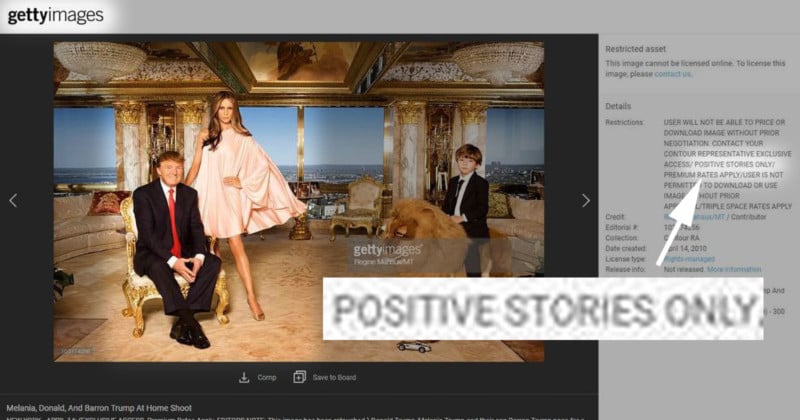 News media indirectly helped First Lady Melania Trump pocket up to $1,000,000 for Trump family photos on Getty Images that were restricted for use in “positive stories only,” a new report has revealed.

NBC News discovered that President Donald Trump most recent financial disclosure reports that Melania earned between $100,000 and $1,000,000 — only a range is stated — from Getty Images for 187 family photos (which have apparently since been removed) shot by Belgian photographer Regine Mahaux between 2010 and 2016.

One unusual feature of the photos is that Melania, a subject of the photos, earns royalties from them — something that isn’t mentioned on the Getty Images photo pages. In ordinary photo contracts, only the photographer (e.g. Mahaux, in this case) and photo agency (Getty Images, in this case) directly profit from photo sales — though, there are cases in which celebrities share in royalties for subjects such as weddings and baby photos.

What’s also unusual about the photos on Getty Images is that one of the usage restrictions reads: “POSITIVE STORIES ONLY,” and several prominent news outlets (e.g. The Daily Mail, Yahoo News, Fox News, SF Gate, Houston Chronicle) have licensed photos from the set despite those restrictions.

NBC News found that it itself had used images from the set in a Nightly News segment on Melania that aired in July 2016.

As with some of the other news outlets, NBC News claims it never knowingly agreed that the photos would only be used for “positive stories” and was not aware that some of the royalties would go to Melania.

When contacted by NBC News for comment, several of the news outlets (e.g. Yahoo News, SFGate, Houston Chronicle) immediately removed the photos from their websites.

Getty Images tells NBC News that it doesn’t reveal the profit share arrangements for photos in its library and that it pays “contracted royalties back to the photographer and/or individual(s) as covered by their confidential agreement.”

This is the First Confirmed Picture of a Newborn Planet