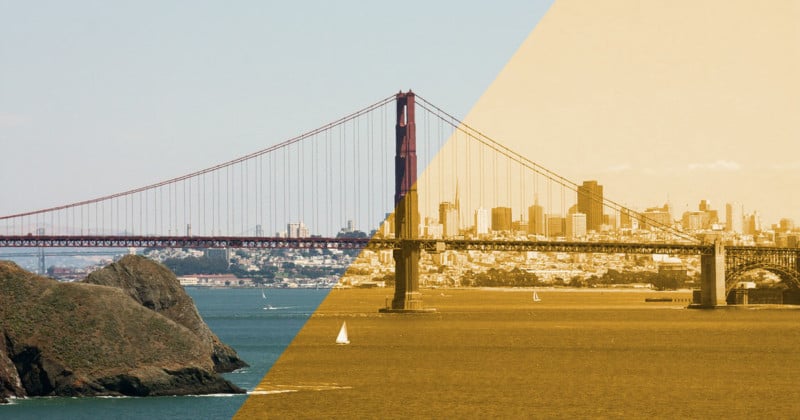 The County Fire burning in Northern California’s Yolo County is blanketing San Francisco with smoke today. And when combined with the fog rolling in from the Pacific Ocean, the smoke is giving the city an eerie sepia-toned look that’s making it look like it was passed through an Instagram filter.

People have been taking to social media today to share their unusual #nofilter photos of San Francisco:

Ever wondered what happens when smoke from #YoloCounty fires meets #SF fog? pic.twitter.com/rhDI4yiGdi

San Francisco sky is bizarre right now. Rayleigh scattering through this cloud is depleting all the blues and leaving us with a sepia sky. pic.twitter.com/weUDCkulsN

SF looks like it has a sepia tone applied to it because of smoke from the wildfires pic.twitter.com/WEUTmFrbux

Smoke from the Northern California fires is filtering the sunlight. It's like looking through amber-colored sunglasses.@NoeValleySF @KarlTheFog pic.twitter.com/1PqC9pvqpk

#CountyFire smoke turning the skies of #SanFrancisco orange. No filter on this photo from a friend in #sf @FOX40 pic.twitter.com/oe53XMybfJ

The sky over San Francisco today from the Yolo County Fire.#countyfire pic.twitter.com/auVcITZomW

I didn’t edit these at all. Taken at 9th x Harrison in SF. This smoke is no joke. #SanFranciscoFire pic.twitter.com/7IjZ0jVPWU

Here’s a satellite photo showing what the smoke plume looks like in its journey from inland towards the coast and bay:

Smoke from the #CountyFire moving directly over the central San Francisco #BayArea, as seen on today's #MODIS image. Still getting some ash falling in #SF though the smoke plume is still mainly above the surface marine layer. #CAwx #CAfire pic.twitter.com/rHzYB9pFjs

And despite the smoke acting as an Instagram filter, authorities are reportedly saying the air quality of the city is still “fairly good” because the fog is acting as a filter for the smoke.

Court Rules Copying Photos Found on Internet is Fair Use