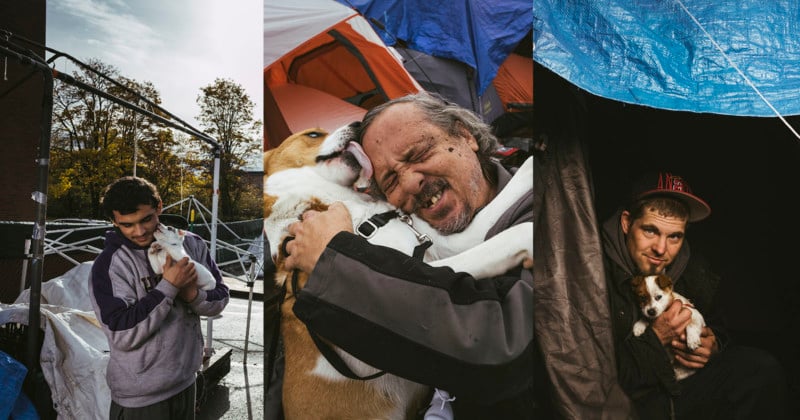 In October 2017, I visited a good friend in Seattle, Washington, who runs an international animal rescue organization. Animals can have a positive impact on people’s lives. Unfortunately, I also saw and learned how much animals suffer abuse around the world. During my visit, I saw that many homeless people kept animals with them, and it gave me an idea to document their connection and dependence on each other.

I approached and sought permission to photograph in Tent City 3 — a non-sanctioned temporary homeless encampment — and also other homeless people throughout the area.

Animals accept us as we are. They love unconditionally and without reserve. They bring joy, love, and reassurance during our best and worst times. I felt compelled to use this connection; the unwavering bond between human and animal as the basis for this series, titled “Unconditional Love.”

Calli was rescued by Candi two and a half years ago from an abusive home. She nurtured her back to health and the bond between the two of them has grown very strong. Calli, a great support to Candi, has been trained to be her seizure dog. Originally from New Orleans, Candi and her husband moved to Tent City 3 eight months ago. Candi was the first person we met at the site, advocating for us to be allowed into the camp.

Josh, a veteran, served active duty in the Iraq War in 2009 and 2010. He suffers from post-traumatic stress disorder. His puppy Sue provides him with emotional support, helps him get out of bed and gives him someone to share his life with. When we met Josh, he had only had Sue for a few weeks.

Prior to moving to Tent City 3, José and girlfriend Cassidy were living on the streets. José was released from jail and lost his home and, without the support of their families, they rely on each other. Kilo, their puppy, had been given to them by another camper. José wanted the dog to bring happiness to Cassidy when she was down.

Genny and her mother are from Great Falls, Montana. They have lived in Tent City 3 for several months. Goku is Genny’s second cat. She referred to her first cat as a therapy cat, prescribed by her doctor. The first day we visited Tent City 3 Genny was helping at the front desk of the camp, while her mother was attending church services next door.


Chris, a Veteran, has been in Tent City 3 for 2 months, “I used to have a relationship with Alisha, but now we share Drew, he keeps me company when I feel alone, I have two children I miss dearly, ages 13 and 14”

“I got Drew for my son Braylen, I wanted him to have someone to play with,” said Alicia “He always roamed the encampment finding objects to keep himself entertained.” They have lived at Tent City 3 for the past four months

Maranda has been in Seattle for 5 years and has owned Bully since she was a puppy, Bully provides love and safety and a sense of security while Miranda’s husband is away.

“Jamie had found Meatball less than 24 hours before this photo was taken, her previous dog – Nemesis, was purchased on recommendation of her doctor as treatment for her schizoaffective disorder. “Meatball provides me with motivation, life without animals would be “much harder” she says.

Tod has been homeless for 20 years, he used to have dogs, but confessed he had to get rid of them because “I spent too much time looking after myself”, he now regrets it, he feels lonely.

It was uplifting to see the happiness these animals gave these people who have so little, and I would like to continue this series into the future.

I would like to mention Vivian Goldbloom, the founder of Emerald City Pet Rescue and Emerald Kitty Café. Vivian kindly donated Clothes for all at Tent City 3, and also food, clothes, and toys for the animals. Vivian is an inspiration. Her rescue was established in 2013 as a non-profit dedicated to rescuing, nurturing, and rehabilitating homeless and neglected animals as well as animals in need due to relinquishment.

About the author: Louis Amore is a photographer based in North London who shoots reportage, landscape, portrait, interior, food, promotion, and product photography. You can find more of his work and connect with him through his website, Twitter, and Instagram.