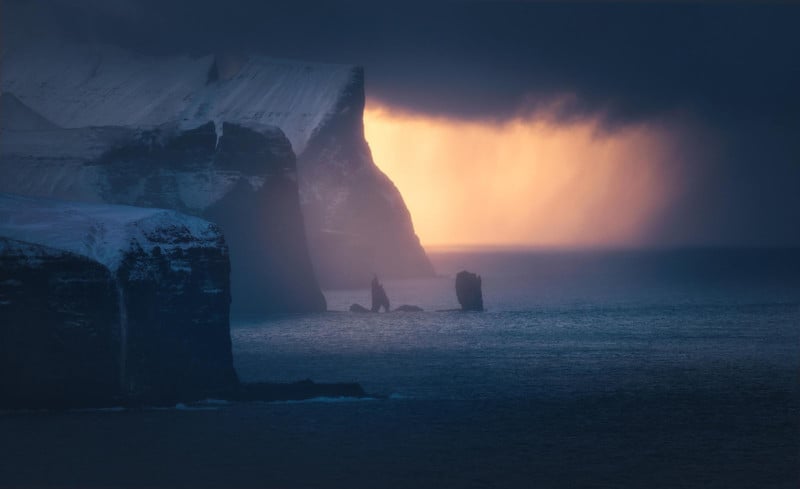 This was one of my scariest moments as a photographer. What you don’t see in this photo is the 100-meter (~330-foot) drop in front of me and the gale force wind from behind. Two minutes of light and then it was dark again.

I took this picture in March on Kalsoy, Faroe Islands. You see the view from the Kallur lighthouse near Trollanes towards the famous Risin og Kellingin (“The Giant and the Witch”) sea stacks during a stormy and cold day. In fact, it was taken in some of the most intense conditions I have ever photographed in.

To reach the location where I captured this image, one has to do a rather short but partly steep hike along the coastline of Kalsoy. What had taken me around 40 minutes in the spring some years earlier turned out to be a very strenuous hike in the winter, as there had been many days of snowstorms in a row and exceptionally cold temperatures had prevented the snow from melting.

Behind the lighthouse, there is a narrow ridge that leads to some nice viewpoints of the lighthouse and the huge cliff behind it, as well as to another point where the sea stacks line up nicely with the cliffs next to them. The vertical drop is over 100 meters, and in stormy conditions, it can sure cause your heart to skip a beat. It was iffy walking out onto the frozen ridge as the wind kept increasing in strength — it’s not the safest feeling, for sure.

But when I first captured this scene in the spring years ago, it lacked drama and I was never satisfied, so this time I was willing to accept the challenge.

Snowstorms were blasting through the fjords, blocking my view of the sea stacks most of my time there. But all of a sudden, the low clouds and storm parted for a brief moment, allowing the sun to throw a beautiful splash of color into the scene. Breathing heavily and pushing my entire weight onto my tripod, I captured a series of photos, hoping at least one of them would turn out.

I was shooting with a 45.7-megapixel Nikon D850 and a Tamron 100-400mm lens at 400mm, so it was a challenge getting a sharp shot — many photos come out blurry. But I thankfully got some frames that were usable, and this was one of them.

About the author: Felix Inden is a photographer based in Köln, Germany. You can find more of his work on his website and Instagram.