Here’s a pro tip: if you’re looking for somewhere to place your camera for a while when outdoors, don’t leave it under the tires of a vehicle. This 12-second video shows the pain that can result if you do.

This tough lesson was learned this past weekend by San Francisco Bay Area photographer Rafael Castillo who took to the /r/photography to share his misery and word of warning.

“A few graffiti artist friends were painting a legal storefront in Berkeley on University Avenue, and it was a beautiful and hot sunny day,” Castillo tells PetaPixel. “At some point we had gone to the back private parking lot, and my camera had been sitting in the sun for a while, so I figured I would place it under my friend’s truck to give it some shade.”

“The truck was already parked and we weren’t going anywhere so I figured it would be fine, but after a while my friend said he was going to move the truck so as to not get spray paint on it, and I had forgotten that my camera was behind the tire,” Castillo says. “About 5 seconds later, I heard the horrible sound of the camera being crushed, and all of us yelled for him to stop the car. The video is the aftermath before I bagged up all the parts and went home for the day.” 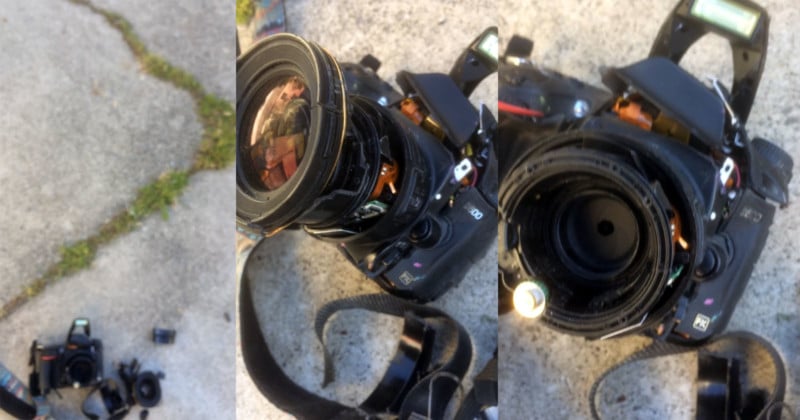 “Obviously, I highly recommend not putting your camera under a car, which I have now learned from personal experience, but it is most definitely common sense,” the photographer says.

Castillo found that most of his camera’s internal parts were protected by the D600’s metal frame, so the crushed camera may still be able to be sold for parts to have components come to life again in other cameras in need of replacement parts.

“I’m like 30% sure [a] UV filter would have helped and this could have all been prevented,” Castillo quips.

Credits: Video and still frames by Rafael Castillo and used with permission

This $200,000 Lamborghini is the World’s Fastest Camera Car