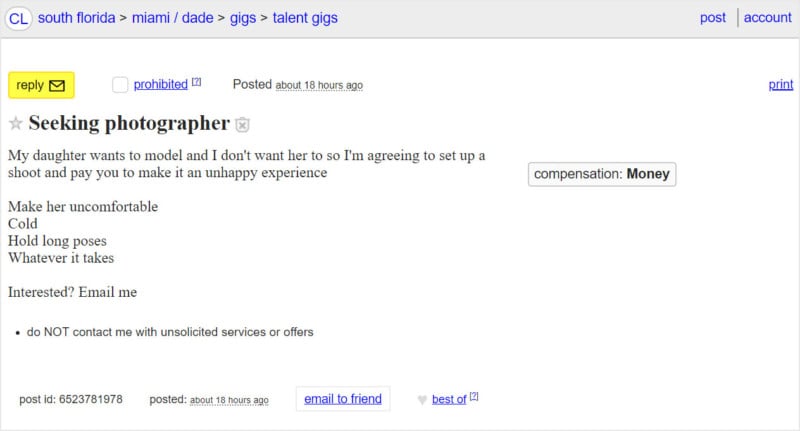 A PetaPixel reader was browsing for photography gigs on craigslist in South Florida today when he came across this bizarre request: someone was looking to hire a photographer to provide an “unhappy experience.”

The listing was apparently posted by a concerned parent whose daughter has dreams of becoming a model. Not wanting their daughter to pursue this line of work, the parent decided that the best way would be to secretly arrange for a photographer to show the daughter how terrible modeling is by paying for a faked photo shoot experience.

“My daughter wants to model and I don’t want her to so I’m agreeing to set up a shoot and pay you to make it an unhappy experience,” the parent writes. “Make her uncomfortable. Cold. Hold long poses. Whatever it takes. Interested? Email me”

We reached out to the poster to learn whether or not they had successfully hired a photographer for the gig, but we have yet to hear back. Less than 24 hours after being online, however, the post has already been flagged by other craigslist users for removal.

“Basically, you would be getting paid to mentally abuse their kid,” the photographer tipster tells PetaPixel via email. “Parent of the year.”

Update: Photographer Adam Sternberg tells PetaPixel that there’s evidence this listing may actually be some kind of lighthearted hoax… or worse. He points out that a listing with the same request and very similar language was posted nearly a week ago in Las Vegas.

“It’s been in two other cities but it looks like they were flagged off,” Sternberg says. “It was a topic of conversation in a local photographer group the other day. My bet is [that the motive is] to somehow publicly dox people by posting somewhere online about the photographers who would actually take this job.”

Eddie Adams’ Photo Studio in NYC is For Sale for $19.95 Million