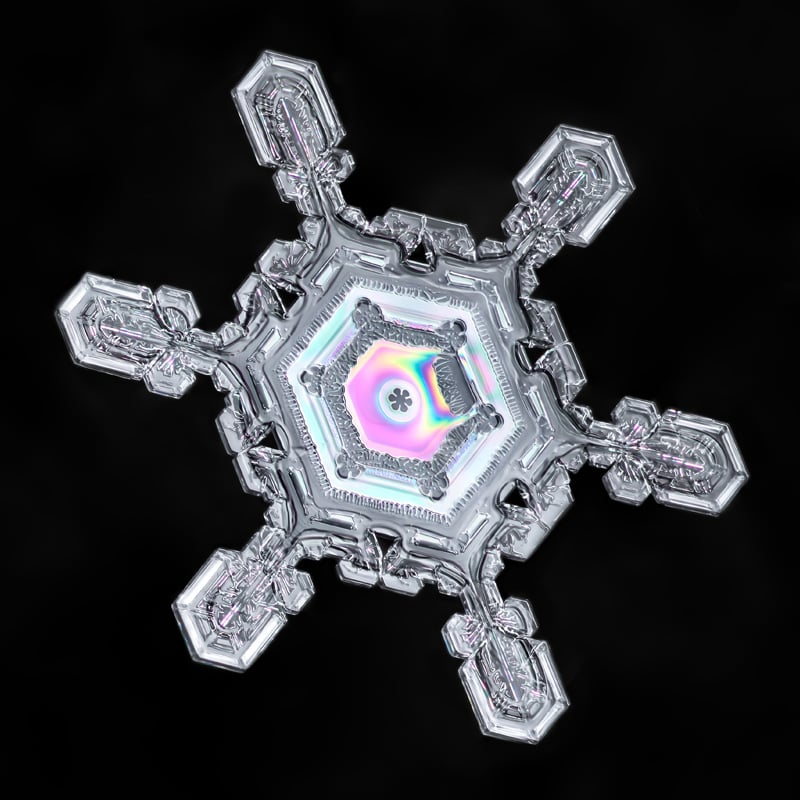 Having photographed snowflakes for nearly a decade as a large component to my career as a photographer, I’ve had the joy of encountering mysteries in the snow and the enthusiasm to sort out the physics behind it. No mystery captivated me more than the first time I saw a ring of color in the center of a snowflake. 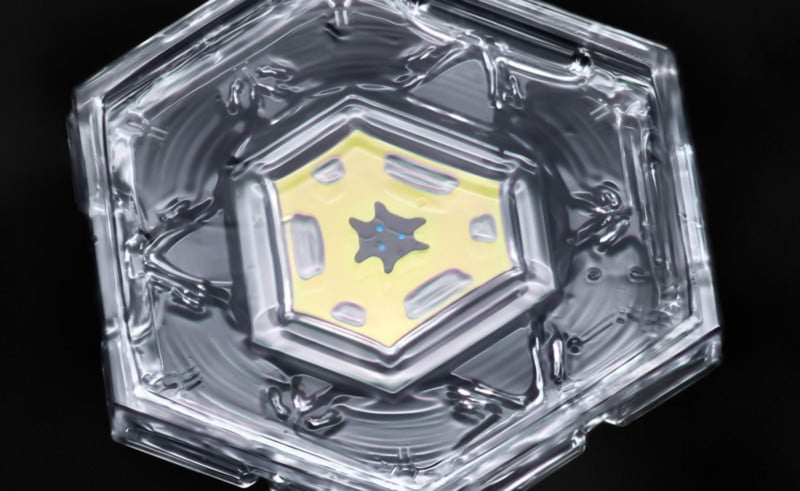 All of my snowflake photographs are created using reflected light, which is different than most historical photographers who used transmitted light (light passing through the snowflake while on a glass plate), so this phenomenon was relatively undocumented until I stumbled across it during the early days of 2012. Using reflected light has a whole host of challenges to overcome, including the fact that the crystals need to be photographed on a slight angle. 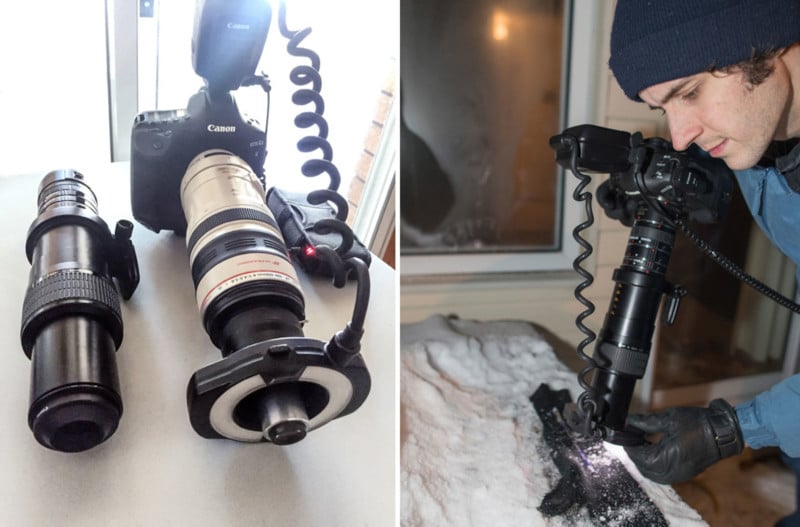 A slight angle might not seem like a big deal, but it forces you to rotate the camera around the very fleeting subject with the snowflake at the center of rotation, and you’ll need to focus stack. This is all done handheld in order to find the proper angle fast enough, like getting glare off a window to reveal all of the surface features of the snowflake. Occasionally, you’ll also be rewarded with a blast of unexpected color. 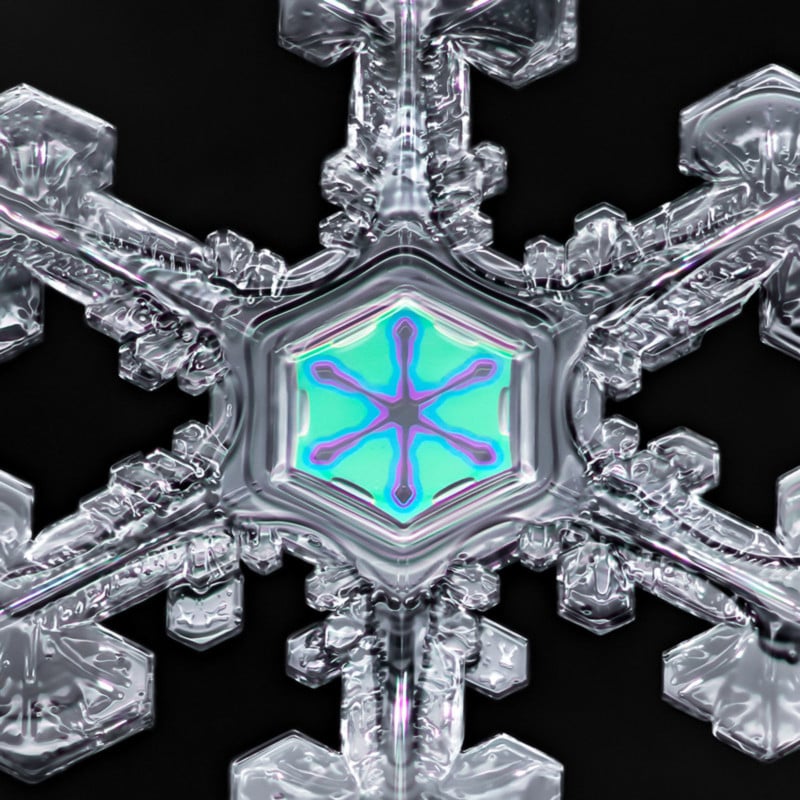 At first, this was a little hard to believe. How could this be possible? Having seen thousands of snowflakes of all varieties, where has this mysterious color come from? The solution is simple, though the conditions required are rare: thin film interference. As a snowflake grows it often creates a cavity or bubble inside of it where the inner side of the crystal grows slower than the top and bottom edge. This forces the layers of ice on either side of the bubble to be incredibly thin, so much so that light will interfere with itself. 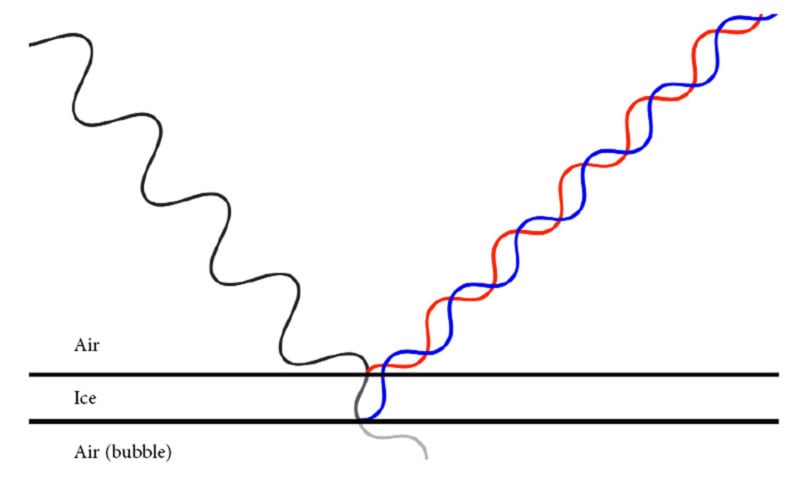 Some light will reflect off the surface of the snowflake, but some will also enter the ice (slowing down due to the density of ice compared to air) and reflect off the inner ice/air boundary back towards the camera. If the ice is thin enough, the distance between the two rays of light is close enough to force them to interfere with each-other now that they are out of sync. Some wavelengths get amplified and others get reduced, resulting in a distinctive color emerging based on the thickness of the ice. 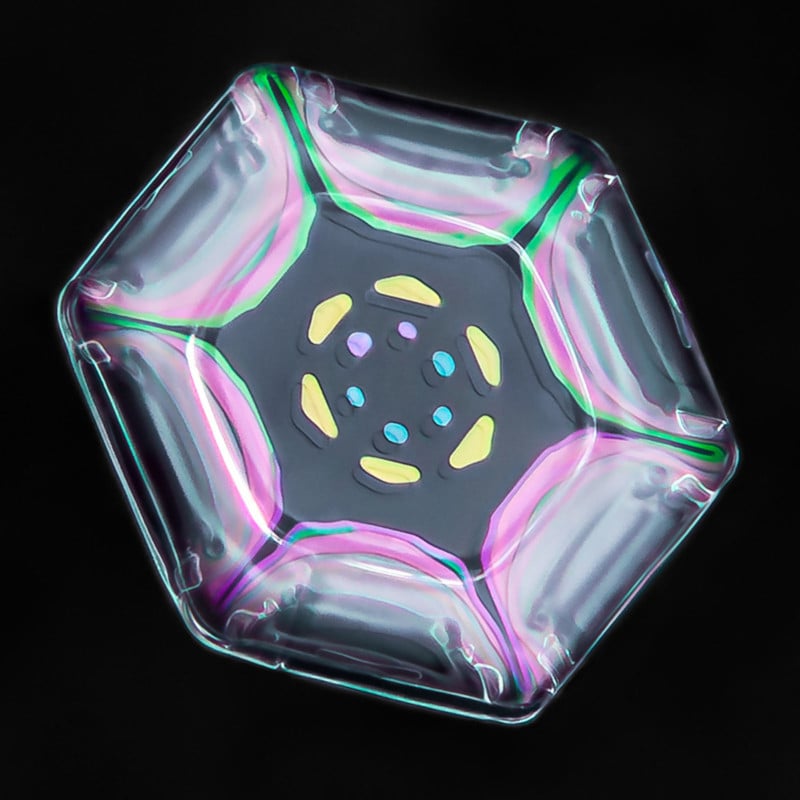 Change the thickness of the ice, and the colors will change. Usually, these changes happen when environmental variables change (humidity and temperature), but it can also be seen when a snowflake begins to melt. As the surface of the below snowflake starts melting from the heat produced by the ring flash, different colors appear within the ice. Other gradations can occur due to the aerodynamic properties of the ice or when snowflakes stick together and certain areas unexposed to new water vapor begin to sublimate. 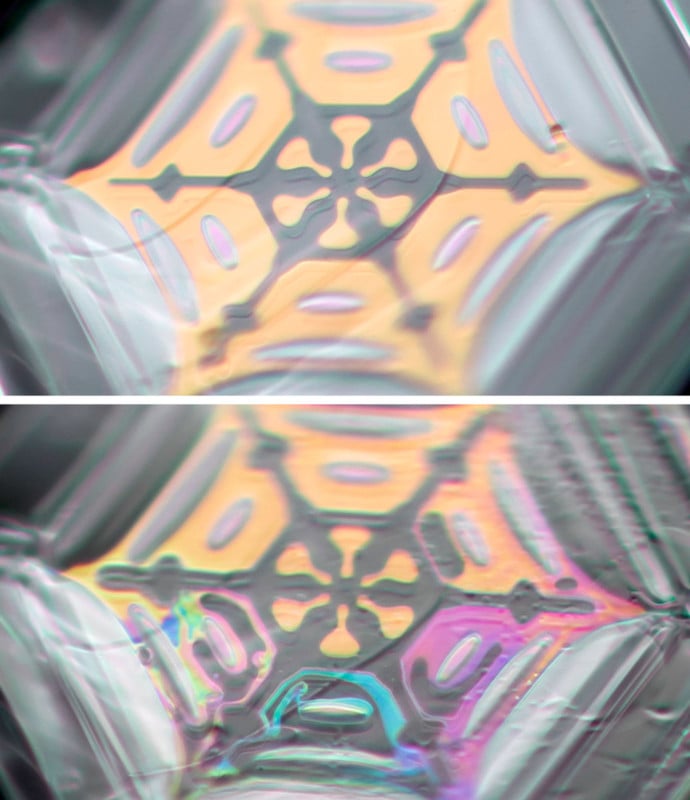 Not all snowfalls produce vibrant snowflakes. Observing every snowfall each winter in an area known for snowy winters, 1-3 occurrences of these vibrant gems is the average, and they won’t last long. Often times the type of snow falling will change within 15 minutes, giving a narrow window when the conditions are just right to discover these. They’re often small, even by snowflake standards, with some measuring half a millimeter across: 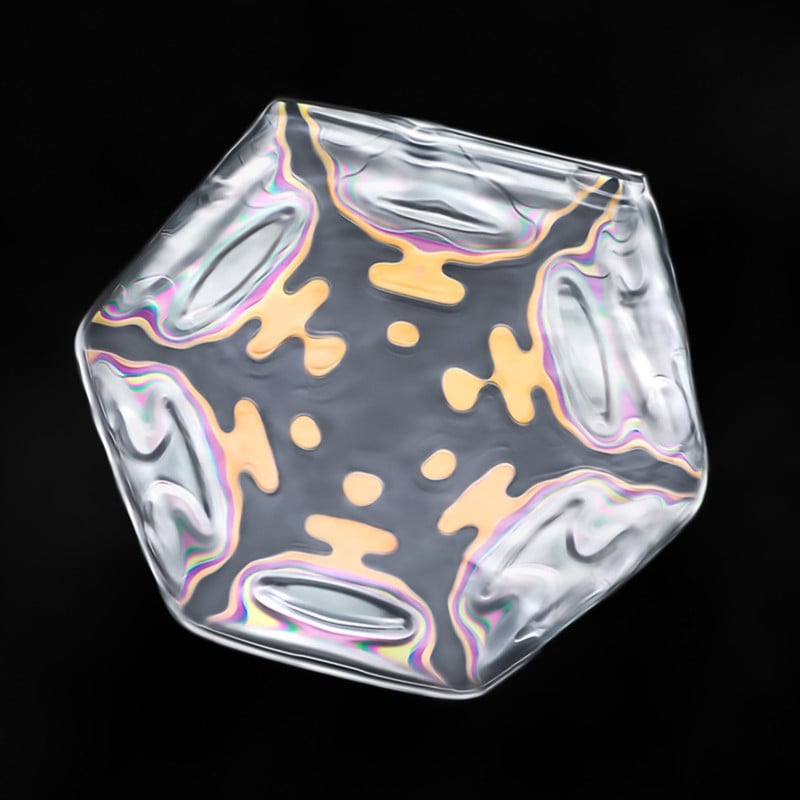 The above snowflake was photographed with a 20x microscope objective mounted to a 200mm base lens (Canon 100-400L set to 200mm), shot handheld and focus stacked from 50 frames. This is borderline impossible to do, so for larger crystals, I use a Canon MP-E 65mm 1-5x macro lens coupled to a set of extension tubes (shifts it to 2x–6x) and adding in the Canon Lifesize Converter EF, which doubles the magnification range to 4x-12x when needed. This isn’t your typical macro photography arrangement.

Oh, and the black background? An old mitten. 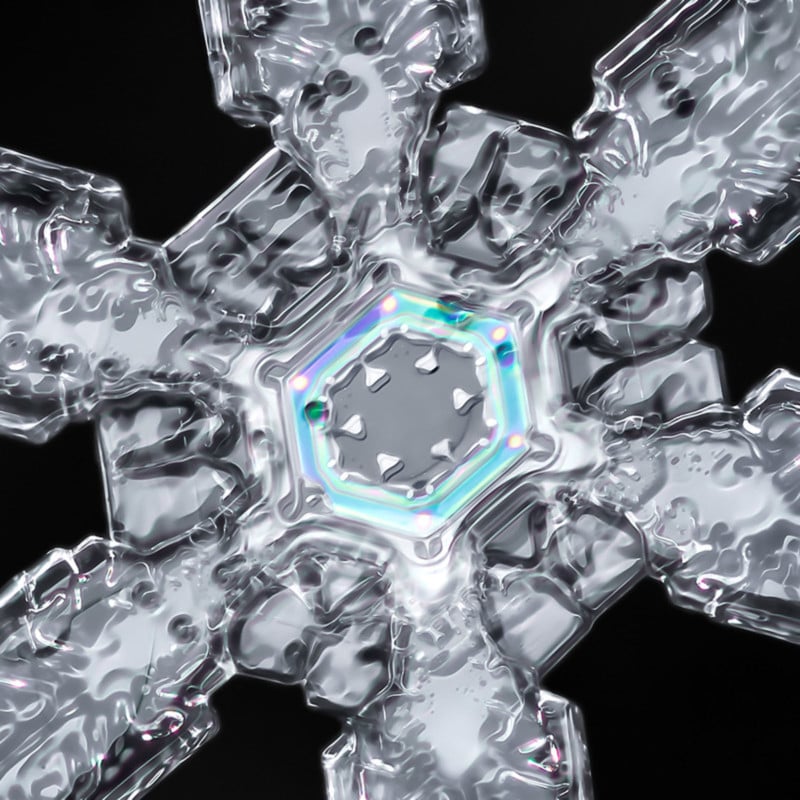 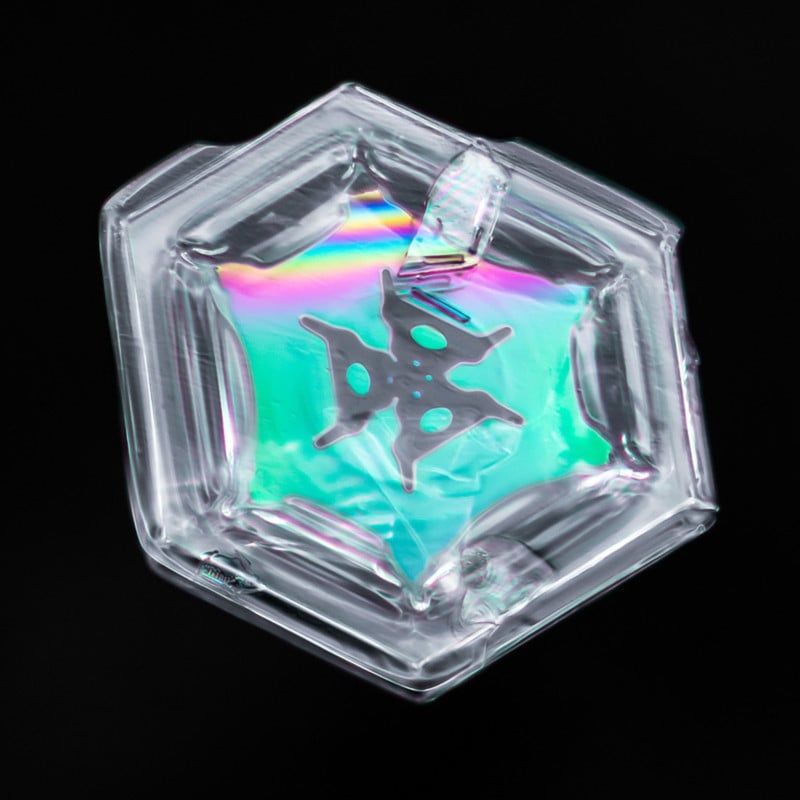 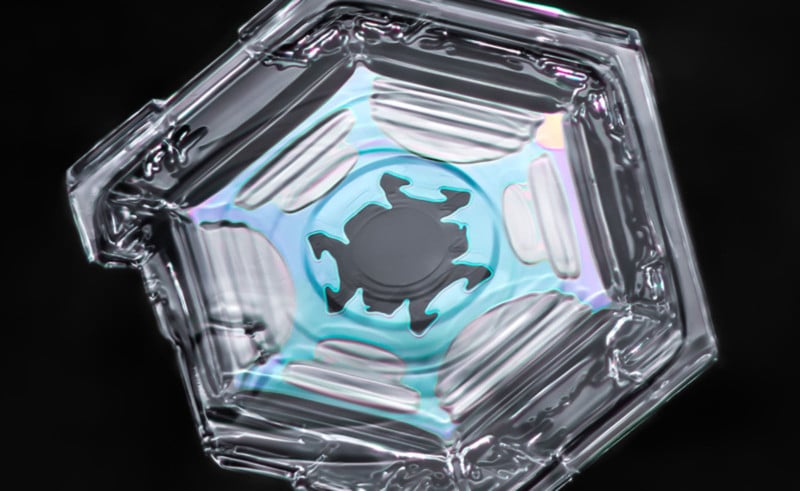 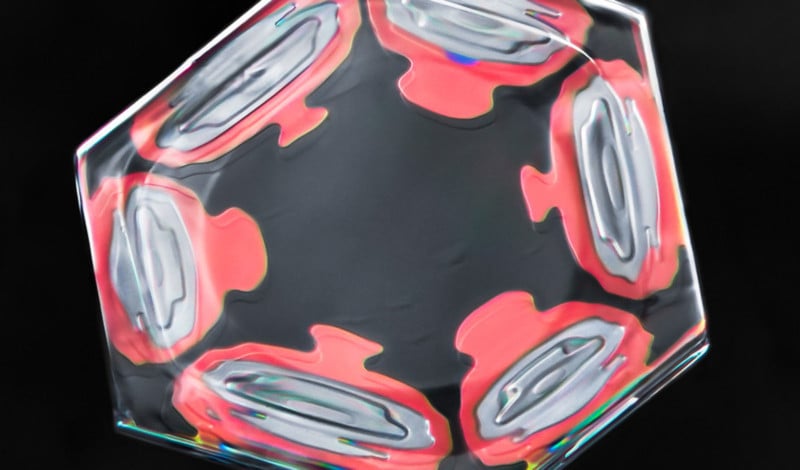 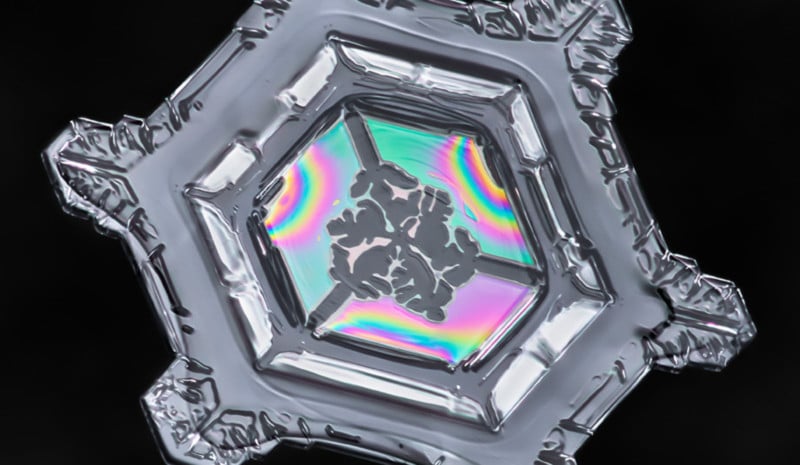 About the author: Don Komarechka is a nature and macro photographer who specializes in snowflakes. He has published a book, Sky Crystals, which details the wonderful science of snow in addition to an exhaustive photographic tutorial from equipment through settings, techniques and post processing. His work on the subject has been featured in documentary films from CBC, BBC, and National Geographic as well as on limited edition Canadian currency. You can also find more of his work on Facebook and Flickr.