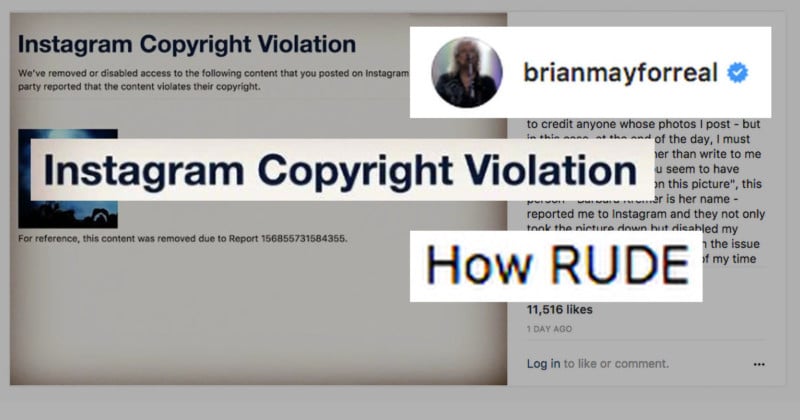 Queen lead guitarist Brian May is lashing out at a photographer after she reported his copyright infringement to Instagram and got his account temporarily disabled.

In an Instagram post yesterday, May shared a screenshot of the Copyright Violation notice sent to him by Instagram after a photographer named Barbara Kremer reported that May had published one of her photos of him without permission.

May says that he’s “usually very careful to credit anyone whose photos” he posts, but he “must have forgotten” in this particular case.

He takes exception to the fact that instead of attempting to contact May (which can be difficult to do given his celebrity status), Kremer instead went straight to Instagram with the complaint.

“You not only took my picture and are evidently exploiting my image, and making money off me without so much as a ‘by your leave’ – but you actually stop me using a picture of myself,” May writes in his public message to Kremer. “What a crazy world we live in these days.”

He then threatens to keep Kremer from ever shooting another Queen concert in the future.

“If I ever discover that you are at one of our concerts in future, look out, because, logically, I will be tempted to have you thrown out,” May writes.

Well this is what I woke up to. How RUDE ! I'm usually very careful to credit anyone whose photos I post – but in this case, at the end of the day, I must have forgotten. So, rather than write to me and say "dear Brian- you seem to have forgotten to credit me on this picture", this person – Barbara Kremer is her name – reported me to Instagram and they not only took the picture down but disabled my whole account until I'd dealt with the issue – which took about 45 minutes of my time that I could not afford because the link refused to work on my phone. What an incredibly unfriendly act from you, Barbara ! You not only took my picture and are evidently exploiting my image, and making money off me without so much as a 'by your leave' – but you actually stop me using a picture of myself ! What a crazy world we live in these days. All I can say is that if you feel you were 'violated', I feel pretty violated myself. To the point where If I ever discover that you are at one of our concerts in future, look out, because, logically, I will be tempted to have you thrown out. Well, Good Morning !!! Bri

While some commenters on the post have voiced support for May, many are defending the photographer’s actions, stating that May doesn’t understand how photography copyright works and that the photographer was rightfully protecting her work from May’s copyright infringement.

Others have taken issue with May’s claim that the photographer is “exploiting” May’s image by photographing him in concert.

Interestingly enough, May has been publicly active in defending his own copyright in recent years. Last year, Queen spoke out on Twitter after their famous song “We Are the Champions” was played when Donald Trump walked onto the stage at the Republican National Convention after securing the nomination.

An unauthorised use at the Republican Convention against our wishes – Queen

Back in 2012, May also co-signed a letter written to Britain’s prime minister at the time, David Cameron, urging him to help fight online piracy.

How to Optimize Images for Your Online Portfolio

Sony a7R III: The Star Eater is No More