My name is Phalgun Polepalli, and I’m a professional wedding photographer in Bangalore, India. After losing my dad exactly 20 years ago in a tragic car accident, I recently did a personal photo project that helped me reconnect with him. On my father’s 70th birthday anniversary, I retracted his footsteps in Paris.

My father was an engineer and a manager at Kirloskar Electric. He joined the company around 50+ years ago and was part of that company until his last day. He used to travel to a lot of countries for work.

My father was obsessed with photographs — my mom thinks he was more obsessed with pictures than I am right now. Fortunately, because of this, we have photos from most of his trips. Paris was one of his destinations. My sister and I have grown up looking at these photos and listening to the stories he would tell us about each photo. Luckily, for some reason, I remember some of them. 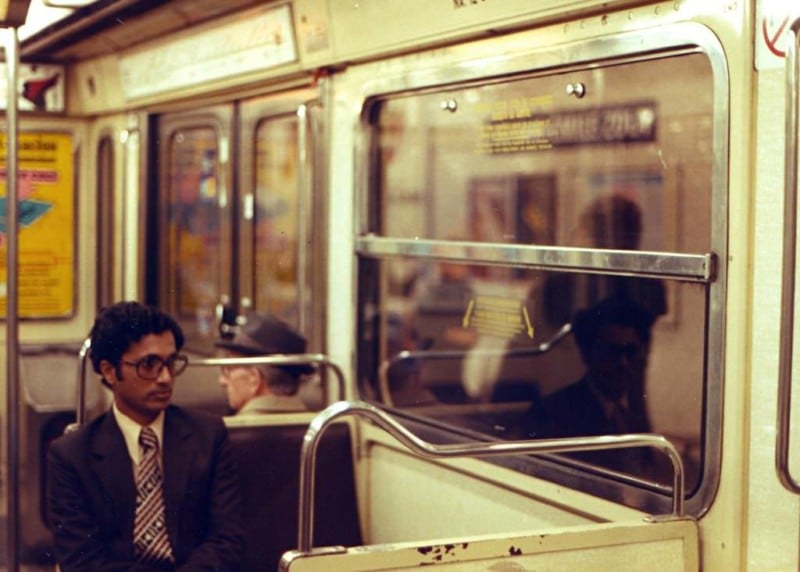 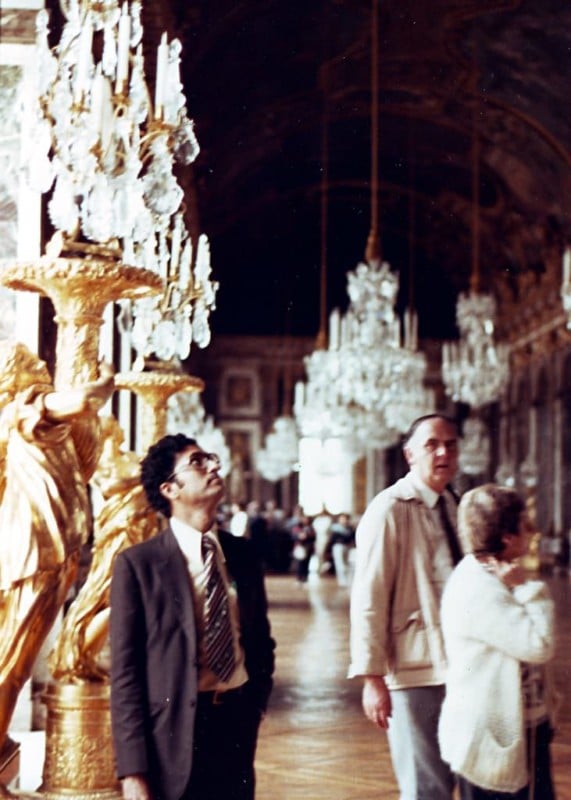 The second part of the story is that in 2011 I decided to visit Paris with my wife to celebrate the first year of running my wedding photography business. We visited some typical “must-see” places and did some off-the-track visits too.

After the trip, I was going through the photos when I suddenly noticed something. When I had scanned the photos of my dad’s Paris trip a long time ago, I had edited each and every photo in Photoshop, so I had a pretty thorough memory of some of the photos. I immediately found similarities between a couple of photos of places/monuments that I had unintentionally captured and my dad’s photos.

I compared them and they were unbelievably similar. The camera angles, the compositions, etc. were so accurate. That shocked me. I was looking at my dad’s photos, captured in 1981-1982, and 30 years later, I had accidentally retraced his steps. What’s more, some of the locations weren’t the most popular tourist spots (e.g. the water fountain in front of Saint Sulpice).

Note: The photos I clicked on the right are cropped to match the photo on the left: 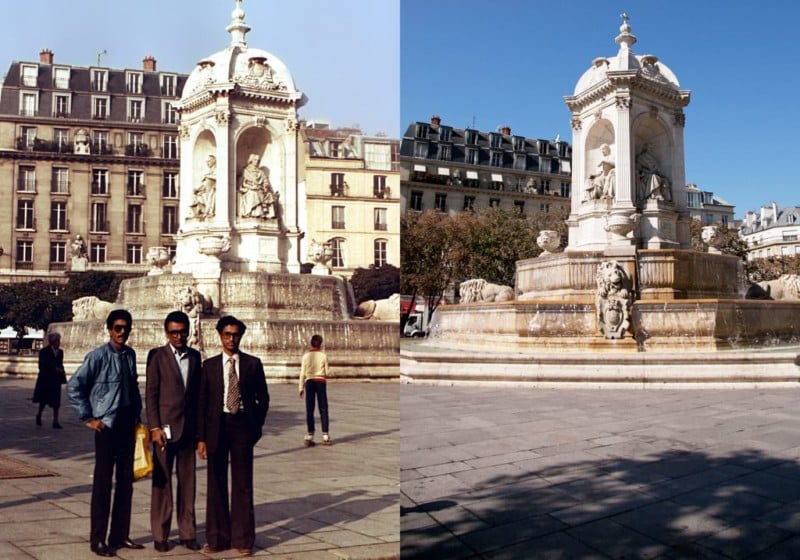 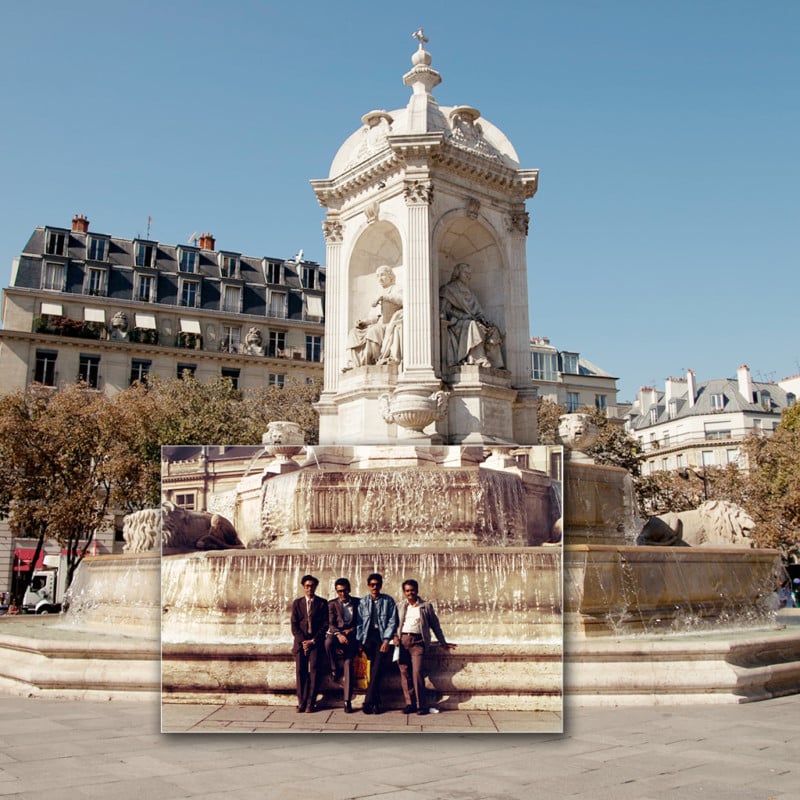 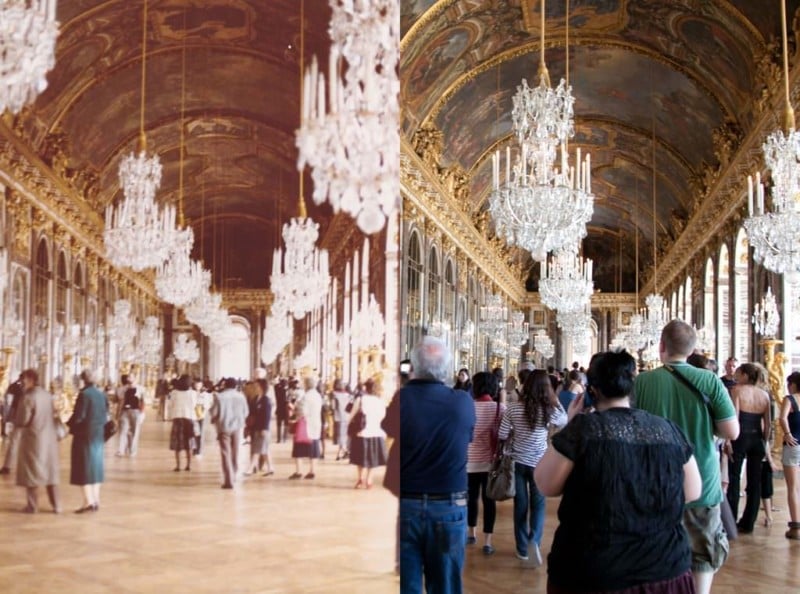 Finally, here’s the third part of the story. Then in April 2017, my family decided to take a trip to Switzerland and included Paris in the itinerary. While making the hotel bookings and fixing dates, I realized that I’d be in Paris on what would be my dad’s 70th birthday. After that realization, I didn’t plan anything beyond Paris.

This spontaneous trip to Paris turned out to be a very special trip for me for three reasons. First, I wanted to really “recreate” some of the photos. Secondly, my dad in those photos is almost the same age as I am now, so that was a crazy coincidence. As if that wasn’t enough, I would be doing this photo project on his 70th birthday: October 4th, 2017. That’s way too many coincidences.

I made sure I had the same focal length so that the angle of view would be the same (50mm lens). 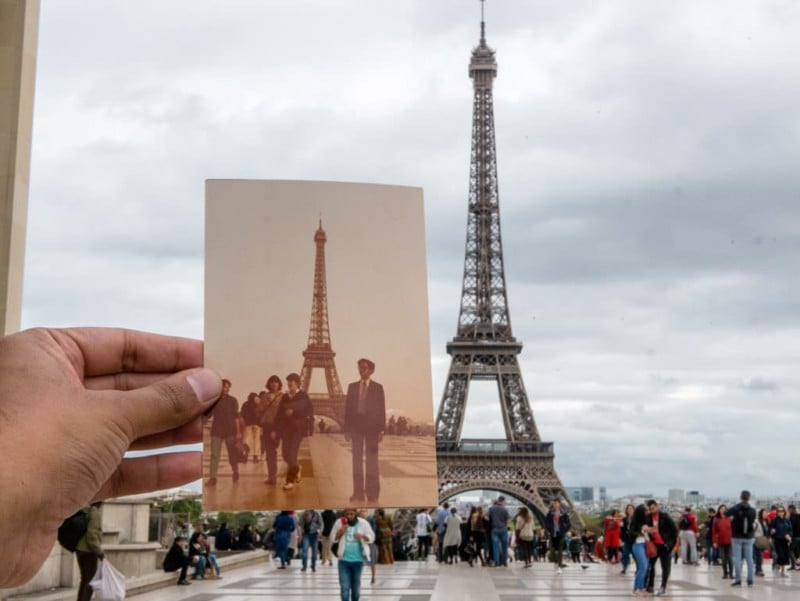 We arrived at Trocadero, the best place to see the Eiffel Tower from across the river. I thought I would be able to get these shots easily. But I was wrong. Majorly wrong. If you actually look at the photo, you’ll see that the statues are at a different level, and the tourists are sitting on a small platform that’s separated from the statues.

After analyzing the photo and walking around the place to try and compose the shot, I realized that the only way to get that shot was by climbing on to the platform where the statues are and shooting from eye level there. (I imagined that’s how my dad must’ve shot it 35 years ago since it was a film camera and the only way to compose was through the viewfinder). I knew that I had to do it quickly because it didn’t look like it was allowed.

I was laughing to myself, thinking “Man, my dad has really broken some rules”. So I climbed onto the platform and tried very hard to compose it exactly the same way. I then immediately jumped off because I saw some police running towards me in the distance. Luckily they ran across in front of me, chasing some street seller selling souvenirs. Phew. Huge sigh of relief. 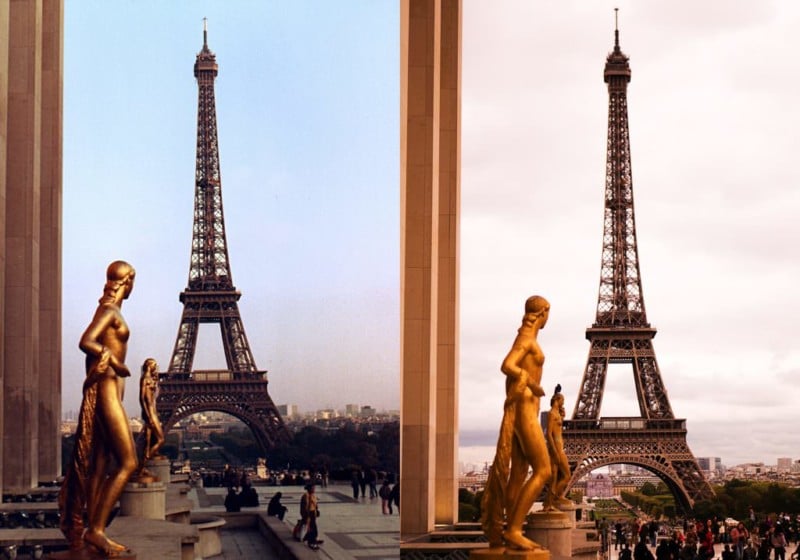 I also decided to recreate another photo in which my dad was standing in front of the tower. So, I counted the tiles and found the exact spot. I stood there in the same way that my dad did and gave the instructions to my father-in-law to click the photograph. While I was standing there, a strong wave of emotions rushed through me — I couldn’t believe that he was standing at the exact same spot 35 years ago. I felt a very strong connection to my dad and missed him a lot in that moment. 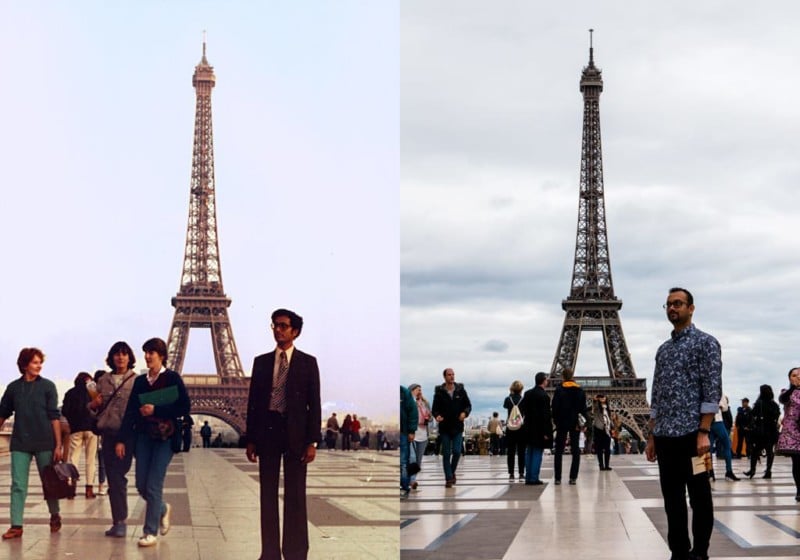 That night, I kept looking at the photos and felt happy that I was able to pull it off.

The next day, we visited the Palace of Versailles. 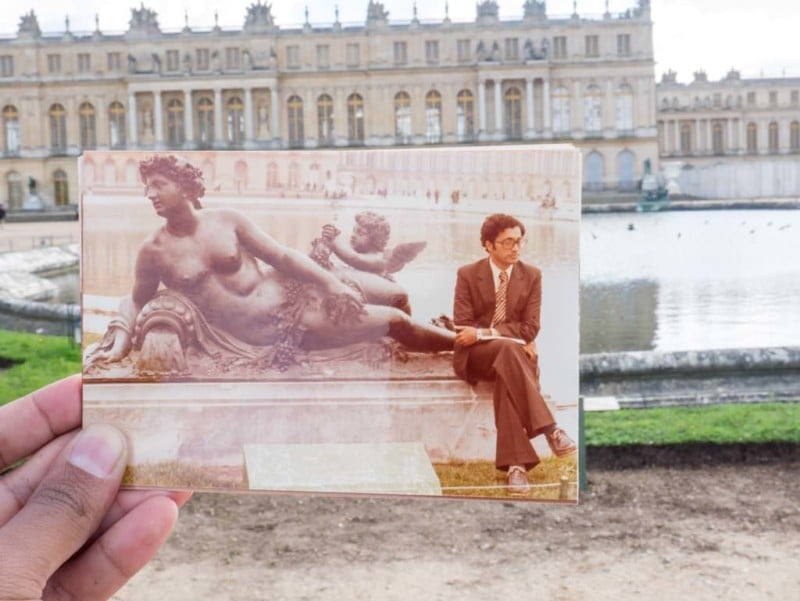 The gardens at the palace are known for one thing: they’re huge, spread across acres and acres. The first photo was easy, I spotted the statue and composed it to get the same angle. If you notice, there is a wire/rope around the statue signifying that you are not supposed to cross it. Again, my dad had broken some rules. Now, I know what my mom meant when she said that he was obsessed with photos.

The second photo above was almost not possible. I searched the entire garden for this location but didn’t find it, and just when we were walking to the exit of the garden, I saw one section which had some boards raised to show that that place was undergoing some renovation. I thought, “let me give it a shot,” and voila! I found the location in the picture.

Many things in the garden have obviously changed over the decades, the shape, the color, etc. but the biggest change was that the statue of King Louis XIV has been moved very far from the palace itself. You can see it below. 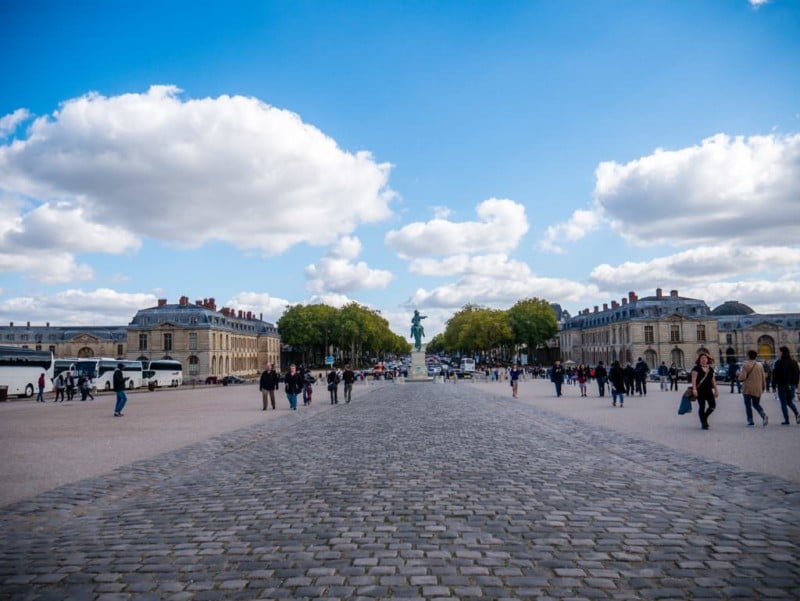 There are many other photos that my dad took with similar amounts of risk to the photos that I’ve already mentioned. For example, he’s tried to take a picture of Arc De Triomphe with on-coming traffic (headed right at him). I remember him saying that he would cross the road (Champs de – Elysee) multiple times and aim the camera at the Arch and try to quickly get a shot. As you may expect, most of those shots are blurred.

This opportunity that just showed up in front of me turned out to be a very memorable experience. Reconnecting a son with his father in a very profound way. It all just shows how important documenting life and memories is for the future generations to better understand one’s real personality. I hope to do the same for my son as well. So far so good.

About the author: Phalgun Polepalli is a wedding photographer based in Bangalore, India. You can find more of his work on his website. This article was also published here.