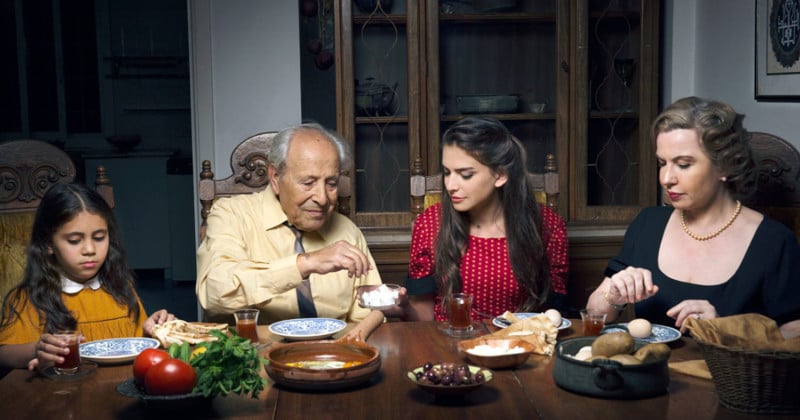 My name is Fayrouz Ftouni, and I’m a Lebanese photographer based in Los Angeles, California. For my project Yasmina, I traveled to Lebanon to shoot a series of “family portraits.”

Yasmina is a photography project that transports us back to the 1960s in Beirut when women were restricted by societal and religious expectations. Though Yasmina is meant to act as a universal female figure — the ultimate caretaker and nurturer who stands strong for everyone else — she comes to understand herself as more than the social construct that she has been made to be.

Each scene in this series shows Yasmina’s growth as she manifests a life for herself first internally and then in reality.

Being a single mother, she is self-reliant, taking care of her child and her elderly parents. Through these images, she awakens to her powers and to a growing sense of self. She realizes she wants more for herself and her daughter and that she has the power to manifest her dreams.

Yasmina is set at the precipice of a new world, a time of awakening, where women like her learn how to make space for their own self-discovery.

The most interesting aspect of this project is that I was able to photograph my images just the way I imagined them and that’s mostly because of the pre-planning, sketching, test lighting, etc. I noticed I was working on my other projects with an idea in mind, but it’s very different when you have it all planned out.

I was able to raise the funds for this project on Indiegogo just before flying back to Lebanon.

Flying to Lebanon to shoot this project was extremely challenging — I had never rented lights there and working with a brand new team worried me. I wasn’t sure how to get my message across, but with my sketches, it really seemed to work.

I sketched out the images first without seeing any of the locations in Lebanon, so I had to be as close to my sketches as possible when I shot each scene. Of course, there were some differences that I had to make on the spot, but the challenge was to tell the story exactly how I imaged it, and it worked!

About the author: Fayrouz is a Lebanese artist currently living in Los Angeles, California and runs her own studio in DTLA where she continues to pursue her career in fashion and portraits. She works both locally and internationally, as she is constantly traveling and planning different photography series. She has self-published two photography books; One and Six by Six on Main Street. Her recent work Yasmina has made it in several galleries in the US such as Burgamot station in Santa Monica, Sebastopol Arts Center in San Francisco, and LA conception arts in Downtown, Los Angeles. You can find more of her work on her website, Facebook, and Instagram.

How NOT to Become a Brand Ambassador as a Photographer