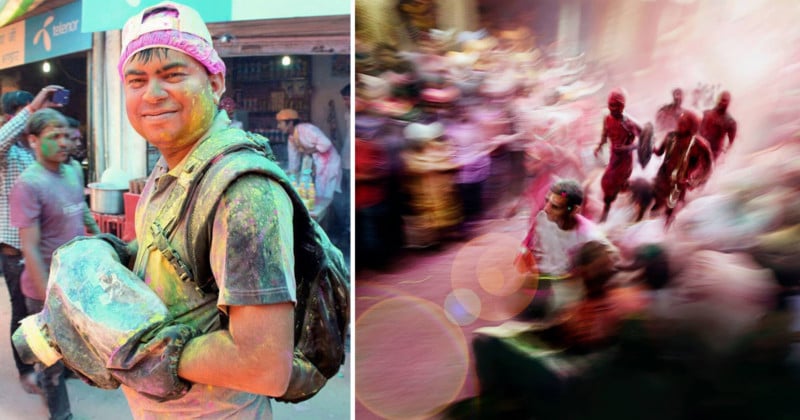 Painting and photography are often considered similar artistic expressions. Henri Cartier-Bresson was a painter before he became a photographer, and became a painter again in his retirement. While his artistic sense informed his photography in terms of his ability to see the world in constantly changing light and compositional potential, he never considered photography as art.


I can only wonder: if HCB had lived to see the full potential of digital and how it has afforded us the ability to paint and create with light as never before, might he have come to change his mind?

As a painter, I always cherished the gentle friction of brush over canvas, the pressure used to create those sparkling nuances that brought my imagination to life. I would always begin with a brush but would quickly find my fingers smudging the colors. This technique has often provided an additional depth and added an element of life in my paintings

As I gradually embraced photography, I could experience a similar feeling while experimenting with slow shutter smudging techniques. The camera as brush or thumb, light as paint or charcoal. A photographer would normally adjust shutter speed as a part of his exposure triangle and play around with it. A painter-photographer would do the same, but in my case, I am often thinking about smudging. This is done with slow shutter, or slow shutter combined with camera movement.

I photograph on the street all over India, but mostly in Mumbai where I now live, and Kolkata where I am from and often visit. The street, especially the Indian street, is a whirling canvas of colors in motion. For me, it’s a kind of motion picture flashing frame by frame until it smashes into my imagination and triggers my shutter. And if I am lucky, that motion, that whirl, is captured in a way that others find captivating. Or at least interesting…

While most street photographers venture out to discover and shoot an unimagined frame or series of frames — only later finding a particular thematic thread — a painter turned street photographer will have already imagined those frames, as if he were to paint them. This cannot always be the case of course, and it’s not a precision process. There is always the element of chance and chance discoveries are part of the thrill, but even then, mind and imagination mesh to determine just how to capture the moment. Of course visualizing your frame “live” is vitally important, and something many amateur photographers in their haste to capture a subject often forget to do.

Below are three photographs taken at Holi, the Indian Festival of Colors. They illustrate well this collision of imagination and chance — the brightness, the riot of colors, the banter and playfulness all so vivid and mesmerizing. Photographing here comes closest to the feeling I used to get while holding a brush instead of a camera when I would sing and chant and playfully “riot” across the canvas.

Children have great imaginations. Most have their imaginings subdued as they get educated in the reality of worldly affairs and become members of workaday society. Children with imaginations not subdued become artists! At least that’s how it was for me. A painter is always imagining, always obsessed with expressing their inner vision in tangible form. The journey can take hours, days, months or years.

A photographer works at a much faster pace, mostly in fractions of seconds. This was a definite attraction for me, as it was for HCB back in the day. More expressing, less time. Another attraction – no paints to mix, brushes to clean, or heavy canvases to lug to the post office and send off to the next exhibition. And no monthly storage fees to house them all!

The more I thought about it the more I felt a certain sense of relief and lightness in leaving traditional painting behind (although I still dabble digitally) and excited about becoming a photographer. Photography held its own particular set of challenges, and I had a lot of learning to do, which of course is ever ongoing. Initially, the changeover was more practical and logistical than intuitive. But an artist is born with certain instincts that continue to live within. Eventually, I began to feel a similar creative energy to painting, and I realized the passionate painter in me had never left. He’d only changed tools.

Charcoal on paper is an amazing gift to the artist. A charcoal offers incredible shades of gray if applied rightly, deftly, with the smudging thumb. The photograph of the horse statue below gives you a good idea of the charcoal effect with camera. For me, it was like using the charcoal on handmade paper and smudging it to add that element of life, of movement. It took 40 or 50 frames of “smudging while shooting” to get the look I wanted, swiftly moving the camera as if to draw a horse in motion. This I always do free hand.

Since my earliest recollections, I have spent much of my life traveling the virtual world of my imagination. I have always derived my energy to survive as well as create from elements found in this phantasmal space. Trance for me is a spontaneous and effortless way of seeing more deeply, where the existing becomes imaginary and the imaginary existing. It’s like living inside an illusion in a way, and yet this “illusion” almost invariably energizes, informs, and clarifies my everyday reality.

The painting below and the photograph beside it, are an example of imagination expressed in contrasting artistic approaches. On the left is a digital painting (oil on canvas) where I imagined a lifeless town with the sole survivor carrying an umbrella through the street. Monochrome for me is the apt color for isolation. The photograph on the right taken on a foggy Kolkata morning two years after the painting was done, is the nearest I have come to capturing a similar sense of isolation. I returned to this same spot three consecutive mornings until the lone cyclist finally made his appearance. Trust me, with a population of 1.3 billion it’s not easy to shoot wide and find anyone alone!

As an artist, I have always been moved by extreme states of human being, especially the more esoteric states of trance and ecstasy. Both are instrumental aspects of Hindu mythology. These states of being are connected but not the same. Trance has a distance to it, a solemnity, while ecstasy is very present and inclusive. The former I see in monochrome, the latter in vivid colors. 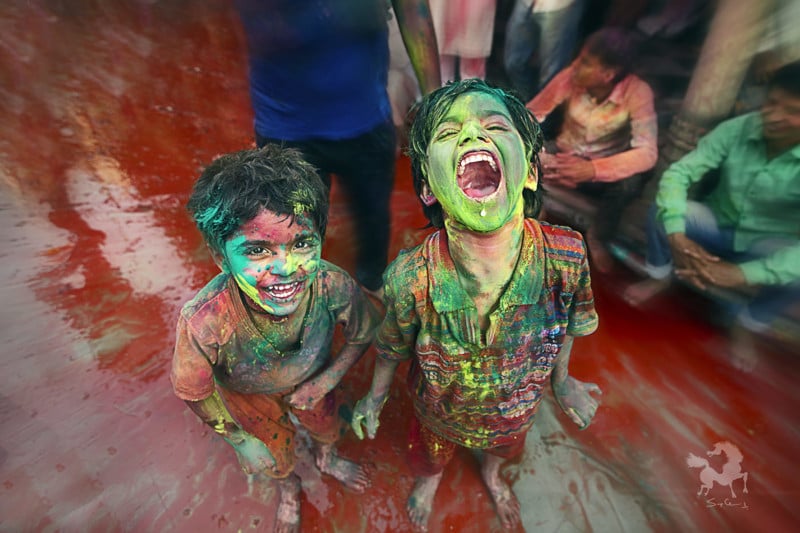 And there you have it, my brief story of a painter turned photographer. As you can tell, I must respectfully disagree with the great Cartier-Bresson on the matter of art versus photography. He was a fine artist as a painter, but he was a great artist as a photographer, even if he never intended to be. He was a photojournalist, a documentarian, so one can certainly understand his position.

As for me, not bound by the rules of journalism, I am free to interpret the world not only as I see it, but as I imagine it. Art should have no restrictions, so perhaps this is where HCB drew his line.

About the author: Swarup Chatterjee is an award winning painter turned award winning photographer based in Mumbai, India. The opinions expressed in this article are solely those of the author. Swarup conducts regular photo workshops in Mumbai, as well as travel photography tours around India. You can reach him via email here, and see more on his website.