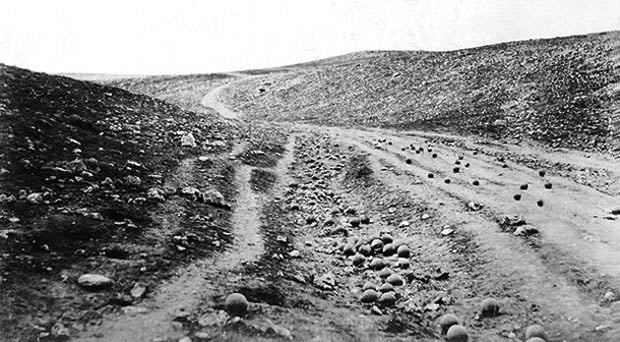 Renowned documentary filmmaker Errol Morris has spent a considerable amount of time investigating the photograph over the past decade. The main question on the table was whether the scene was as Fenton found it, or whether he littered the path with cannonballs himself to make the photograph more powerful.

There’s actually a second version of the photograph — one that shows the same scene, except with a road devoid of cannonballs: 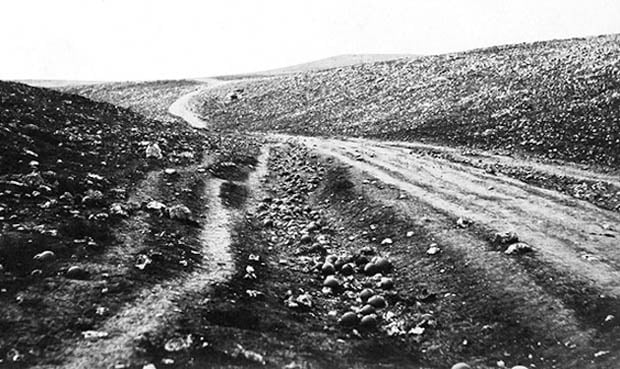 The question was therefore a “chicken or the egg” problem: which of the photographs was captured first? If it was the empty road one, then the scene was probably staged. If the iconic one, then it wasn’t.

Morris became interested in the case after reading a book by Susan Sontag titled Regarding the Pain of Others, in which the author claims (in two brief sentences) that the photo is a fake:

Not surprisingly many of the canonical images of early war photography turn out to have been staged, or to have had their subjects tampered with. After reaching the much shelled valley approaching Sebastopol in his horse-drawn darkroom, [Roger] Fenton made two exposures from the same tripod position: in the first version of the celebrated photo he was to call “The Valley of the Shadow of Death”(despite the title, it was not across this landscape, that the Light Brigade made its doomed charge), the cannonballs are thick on the ground to the left of the road, but before taking the second picture – the one that is always reproduced – he oversaw the scattering of the cannonballs on the road itself.

In addition to consulting with numerous historians and photographic experts, Morris went as far as to travel to Crimea, Ukraine, where the photograph was captured, in order to investigate the scene himself. After all of that, he still came up empty-handed.

Finally, Morris and optical engineer Dennis Purcell noticed something that led them to a definitive conclusion: they realized that some of the small pebbles on the side of the road had moved. Since these were almost certainly kicked around as people treaded over them, Morris realized that the photograph showing the pebbles further downhill was the one that came later. It was the iconic version.

And that’s the story of how Mr. Morris came to discover one of the earliest staged photos known to man.

(via Yahoo via HuffPo)

P.S. You can hear Morris talk about this photograph in this great interview he recently did with Radiolab: