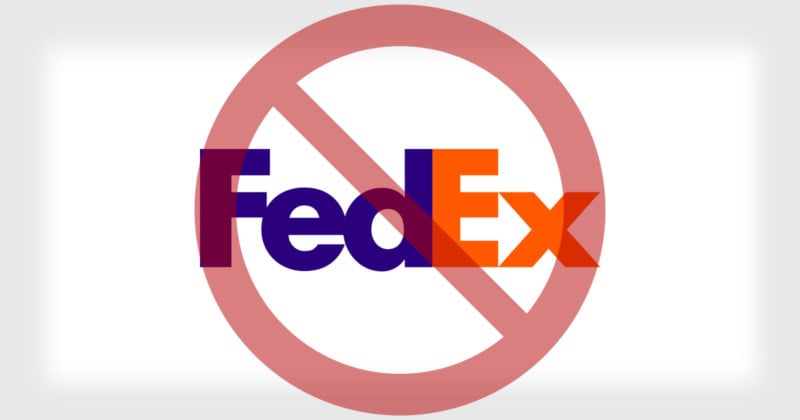 My name is Marc Weisberg, and I’m a luxury home photographer based in Southern California. This is an article about why I’ll never use FedEx again to ship my camera gear to a workshop, as well as what you need to know before ever shipping camera gear. It’s the story of how FedEx utterly screwed up my delivery and cost me over $1,000 to get new gear and re-printing of all my workshop materials.

The story begins in Irvine, California, at the FedEx delivery hub. I was teaching a Luxury Real Estate Workshop in NYC in early June 2017 and needed to ship out a ThinkTank Production Manager 40″ rolling gear case that weighed 60lbs. Following all the rules, I showed up at the FedEx facility 1 hour before the shipping drop-off deadline of 5:00 PM on a Tuesday.

There are a couple of things to know about FedEx shipping/delivery options: (1) Business delivery is delivered to the destination Monday through Friday only, and (2) Home delivery is delivered Monday through Saturday. Since my drop-off was on a Tuesday by their deadline and 4 days was required for transit, I chose home delivery… which should have reached my destination by Saturday end of the day. I say “should have” because according to FedEx, this was their guarantee.

Everything was going according to plan. I followed all the shipping and deadline rules. But, on Friday morning at 8:00 AM, two of hours before my flight from LGB to JFK, I logged onto the FedEx website to track my package. Much to my surprise, I saw that my shipment was scheduled to arrive by the end of the day Tuesday, June 6th, instead of Saturday, June 2nd, as promised.

“…This must be some kind of weird mistake,” I thought. But NO, it wasn’t.

If my gear showed up on Tuesday, June 6th, that meant all my gear would show up after my workshop was finished. Basically, I was screwed. I immediately called up FedEx. They told me it was my mistake, and that I had shipped it incorrectly. First, they told me that I didn’t meet the deadline. Then they told me that I did meet the deadline but that I was in the wrong line — the FedEx Express line. Then they said I was in the correct line, but that I shipped it business delivery (which I did not).

FedEx confirmed that the package wouldn’t be there until the Tuesday, June 6th, by the end of the day. I asked to speak with a supervisor and was told that I couldn’t speak with a supervisor and that there was nothing that they could do for me. What?! I wasn’t having any of that. So I called up the facility where it was shipped from and was able to get a manager on the line, and this is what I learned:

The driver had screwed up.

Hey, I feel for the guy. But we are talking about a multi-billion dollar, multi-national Fortune 500 company, ranked #58 on the Fortune 500 list in 2017. You’d think that they have policies in place to prevent this? But they don’t. The on-site manager at the Irvine facility told me that it wasn’t until Wednesday at some time during that day that my package shipped, and that the package was on a truck somewhere between Joplin, Missouri, and NYC.

She had spoken with the managers in both the Missouri and New Jersey depots and that there was nothing at all that could be done. Basically, I was f***ed! All my lighting gear, all my light stands, tripods, batteries, and all my printed materials for my two-day workshop would be delayed until after my workshop was over.

I had just opened an account with FedEx a couple of weeks earlier, and this was my first shipment ever with the company. How could this happen? I was panicking. I needed to replace all my gear! I needed this essential gear to teach my workshop and also needed my books, which I give each student. The first thing on my mind was that I needed to take care of my students.

Luckily, my workshop was in NYC. We landed in NYC on a Friday evening at 10:30 PM. Both Adorama and B&H camera are closed for Sabbath from Friday sundown until Sunday morning. So, on Sunday morning, I walked into Adorama and plunked down $1,000 for new gear. Renting the gear would have been $800. In my mind, spending $800 on a two-day rental was a complete waste of money. So I purchased all new gear.

Again, I was f***ed. The key here is that the shipment wasn’t lost — it was delayed. It gets worse though: If FedEx is to pay out anything, they will only pay the insured amount that you’ve stated on your FedEx shipping bill. And they get to keep the case and its contents that you shipped.

But wait, it gets better: you have to prove the value of everything that was in your shipment. That’s right: you need to show proof of purchase and the receipt for evertyhing that was in the case that you shipped. They make it very difficult to get your money. And it’s a lengthy process that can take several months.

How to Protect Yourself When Shipping Your Camera Gear

So here are some tips to protect yourself if you do decide to ship your gear:

Needless to say, I’ll never use FedEx again for this type of shipment. In the end, my case finally arrived by the end of the day Tuesday, June 6th, at my friend’s apartment in NYC, 4 days late, when my workshop was completed and done. By that point, my case of gear was of no use to me.

FedEx did end up reimbursing my shipping costs both ways from California to New York and back. But that was nothing compared to the stress, 2 hours on the phone with FedEx, the time, and the money it cost me to replace all my gear. In the future, I intend to try UPS for my shipments… and have an extra case of gear ready to ship, just in case.

Update on 7/18/17: On July 5th, 2017 I was contacted by a Logistics Manager [name being withheld for privacy reasons] from FEDEX’s President’s office. On behalf of FEDEX, the Logistics Manager apologized for FEDEX’s lack of service and for the trouble and out of pocket expenses that I encompassed due to my delayed delivery. Their apology for profuse and sincere for the delay and my troubles that ensued from their shipping delay.

I was also asked to file a claim with FEDEX and that the claim would be handled personally by the Logistics Manager I was speaking with. FEDEX followed up with me times to ensure I had received the claim form and to let me know that they had received the from, again, apologizing each time for the delayed delivery and for what I had to go through to replace my delayed shipment items. I submitted my claim with copies of all my receipts. In a matter of days, FEDEX expedited and approved my claim, and FEDEX’d me a check which arrived July 15th, 2017 with a hand written note apologizing for the delay and the troubles that the delay had caused me. The amount of my settlement shall remain undisclosed.

FEDEX also let me know that should I have any issues at all in the future, that I should feel free to call the President’s office and that they would personally handle any problems/issues that might arise. Had it not been for the power of the Internet, I would have never received the call from FEDEX upper management. FEDEX stepped up big time to make things right for me. I’m delighted to put this chapter behind me now and have learned some valuable lessons about shipping my camera gear, having a back-up plan and what to do and not do in the future.

About the author: Marc Weisberg is an architectural and luxury real estate photographer based in Irvine, California. The opinions expressed in this article are solely those of the author. You can find more of his work on his website. Weisberg is also teaching an upcoming 3-day workshop in Orange County, California, in September 2017. This article was also published here.

This is What Wedding Photos Looked Like in the Late 1800s