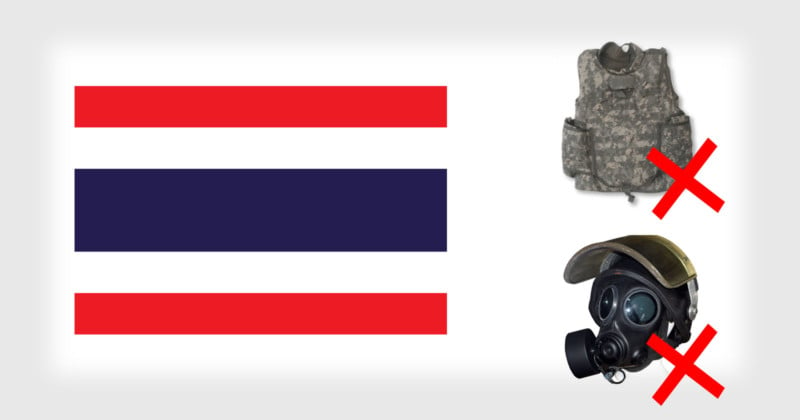 If you’re a photojournalist who covers stories in dangerous places, here’s something you should know: don’t try to bring bulletproof vests or gas masks through airports in Thailand, as they’re considered “war weapons.” At least two journalists (including one photographer) have found this out the hard way over the past two years.

Reuters reports that British freelance journalist Tony Cheng, who does assignments for China’s state broadcaster CCTV, was arrested in Bangkok’s Suvarnabhumi Airport on Monday after he was discovered checking in a bulletproof jackets and gas masks. He and another journalist were taking a flight to Iraq to cover the ongoing fighting in Mosul.

Currently detained at suvarnabhumi airport in Bangkok for trying to taking body armor to Iraq…Land of Smiles and dubious law enforcement..

Protective vests and masks may be standard equipment for photographers and journalists traveling to war zones, but Thailand has had a law since 1987 that classifies those items as “war weapons” that require a license to carry.

Even though Cheng was traveling out of the country with the gear, he was charged with “unlicensed possession of war weapons” by authorities on Tuesday. He now faces up to 5 years in prison if he’s found guilty.

…. and i thought the danger would start when we got to iraq… pic.twitter.com/E8kqr44tq8

Back in August 2015, Hong Kong photojournalist Anthony Kwan was arrested at the same airport and charged with the same crime after being discovered with body armor and a helmet. In Kwan’s case, charges were later dismissed.

Cheng is currently out on bail of about $2,930, Reuters says. Both journalists were reportedly unaware of Thailand’s strict laws regarding the protective gear.

“The FCCT has on a number of occasions offered to work with the Thai government to find a way whereby journalists and others (particularly medical personnel) who may be required to work in conflict zones can carry personal protective equipment,” the organization says. “The club sought a solution to this problem as a matter of urgency after a photojournalist from Hong Kong was detained and charged in August 2015 for trying to carry body armour through a Thai airport. After a time-consuming and expensive legal process, charges were eventually dropped in that case.”

“Some journalists based in Thailand have to cover armed conflicts in other countries, and are required by their employers and insurers to travel with adequate protective equipment,” the FCCT continues. “Under the present implementation of the 1987 law, they are presented with an invidious choice: break Thai law or increase the risk to life and limb.”

An Introduction to Astrophotography: Shooting Stars for Beginners