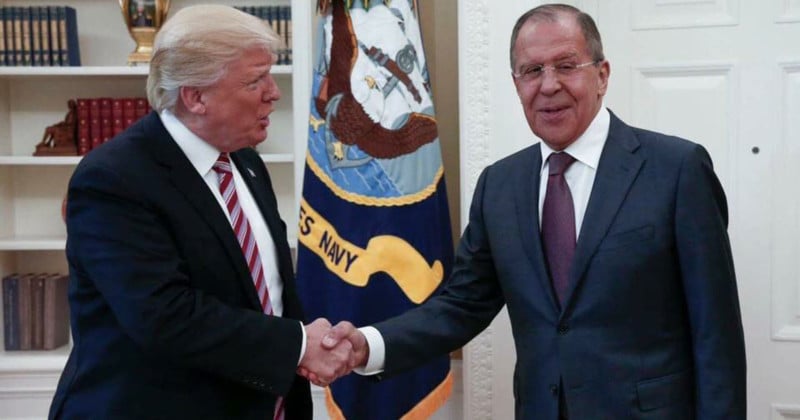 The White House was criticized by the media this week for allowing a Russian press photographer into the Oval Office for President Trump’s meeting with Russia’s foreign minister while the U.S. media was shut out. Now the White House is reportedly “furious” about being “trolled” with the photos by Russia, and the Russian photographer is calling the media stories “nonsense.”

CNN reports that the Trump administration was unaware that the Russian government would allow its state news agency to publish photos of the meeting on Wednesday between Trump and Russia’s Foreign Minister and ambassador.

Shortly after the meeting, Russian photographer Alexandr Scherbak’s photos were broadcast by Russia’s Ministry of Foreign Affairs and through Russian News Agency TASS, the country’s largest news agency (and the 4th largest in the world). The White House didn’t post its photos of the get together until Thursday.

CNN also points out that Russia’s Foreign Ministry decided to “troll” the White House by posting a photo and video to Twitter on Wednesday:

“They tricked us,” an “angry” White House official told CNN. “That’s the problem with the Russians — they lie.”

“We were not informed by the Russians that their official photographer was dual-hatted and would be releasing the photographs on the state news agency,” a White House official tells the Washington Post.

WH furious over Russian government photos of Trump meeting with Lavrov/Kislyak. "They tricked us," an official said of Russians "They lie."

As outrage over the U.S. media shutout grew, the White House official told CNN that it’s standard practice for meetings iwth “lower-level foreign officials” to be more private and for visits from top-level politicians to have more access to the press corp.

Other media outlets wondered whether the Russian photographer could have brought high-tech spy equipment and planted it in the Oval Office.

@ColinKahl No, it was not.

The Russian photojournalist, Alexandr Scherbak, took to Facebook yesterday to respond to the media stories.

“I would like to address the US media,” Scherbak writes. “Honestly, this is nonsense to me. I am an individual who is not in the public eye and I’ve never commented on my work before but this hysteria around my photoshoot at the White House has forced me to write this post.”

He says he has worked for the minister’s press pool since 2015 and has covered almost all of his meetings in countries around the world. Some of photos are provided to Russian’s Foreign Ministry and distributed through TASS.

“There was nothing unusual about the photoshoot with Trump and Lavrov,” Scherbak says. “Everything was typical. After the meeting with Tillerson I was taken by a US representative to the White House. I was scanned, patted down, and then sniffed by canines. Then I was waiting for the arrival of our delegation in a room in the White House.”

“I was introduced to a female photographer who works there and was told to stay by her side as she knows all the protocol details. I took only two cameras to the photoshoot, I left all my stuff, including my cellphone, in another room as I was told to do.”

He says he shot photos for just “a minute” inside the Oval Office and that was the extent of his duties there before he left and went back to his room.

“I am urging US journalists not to lose their professional dignity and not to pin the blame on other people for their failure in organizing the photoshoot and the failure to provide access to their media,” Scherbak concludes. “I have worked as a professional photo correspondent for many years and I am facing such absurd and ludicrous charges for the first time.”