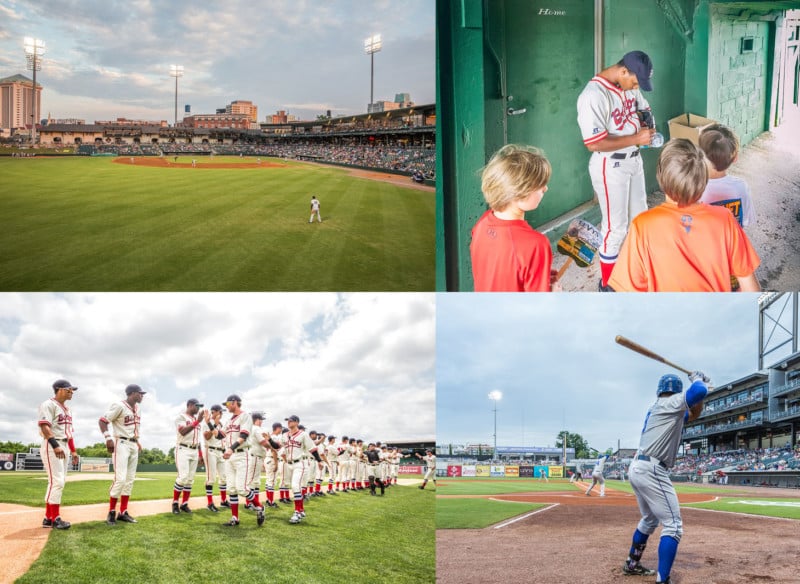 In April of 2015 with the approval of the Birmingham Barons of the Southern League, I began a photo project by following the team through the season from beginning to end. 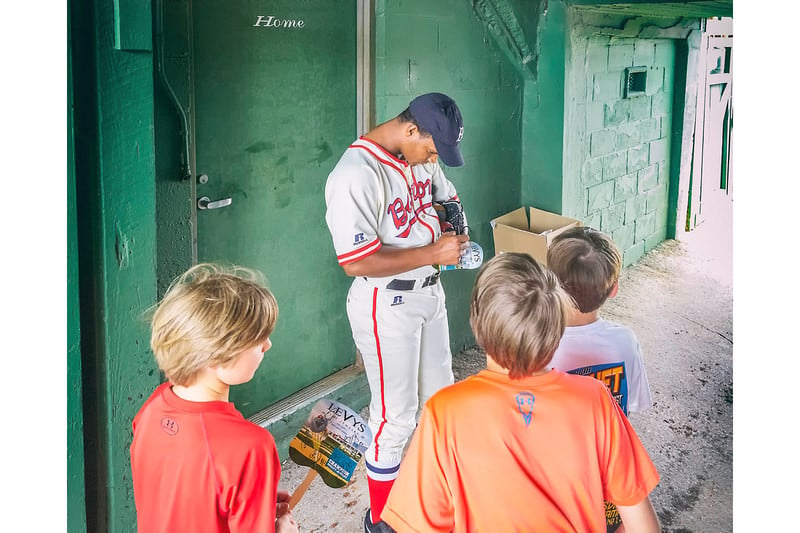 The Barons trace their heritage to Rickwood Field, one of the oldest ballparks in America. At one time they were two teams, one all white and one all black. A special section of the stands was reserved for white fans during games the Black Barons played, and that same section was reserved for black fans, when the white team played. While those days are long gone, the team still returns to Rickwood Field one day each year to play a throw back game. 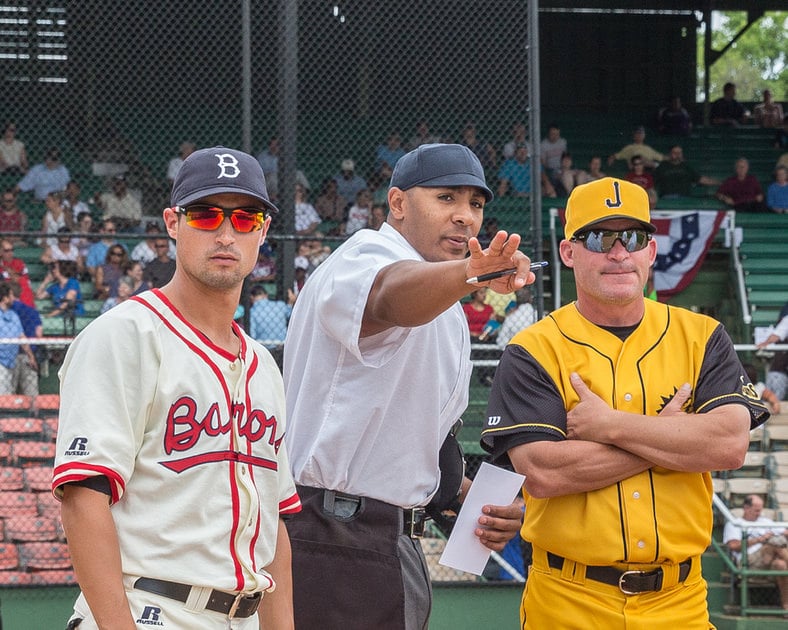 Here in Alabama everything seems to take a backseat to college football, but each spring and summer in Birmingham and across the Southern League managers meet with the home plate umpire for the first time and the season begins. 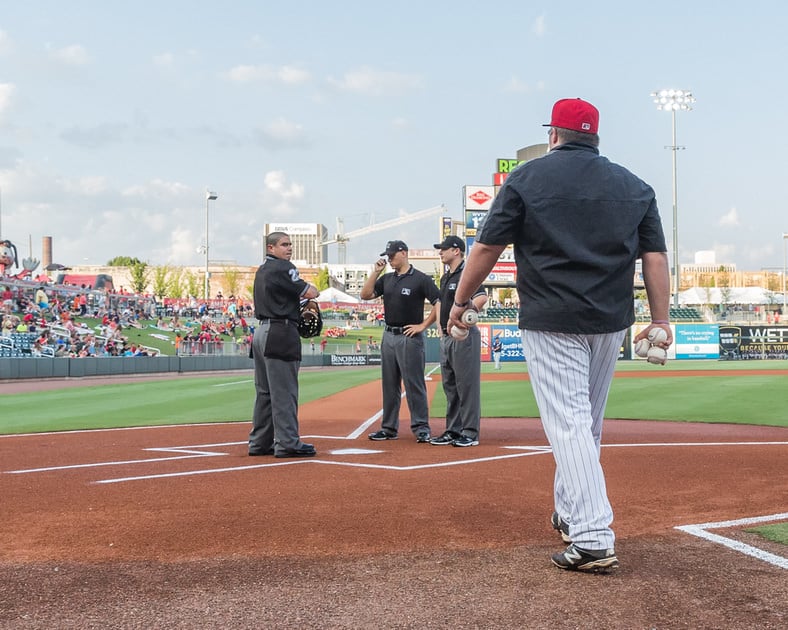 Baseball is a ritual filled game. Travel from stadium to stadium, attend game after game and you will see some of the same series of activities before the start of the game. Above, the bat boy delivers the first game balls to the home plate umpire. 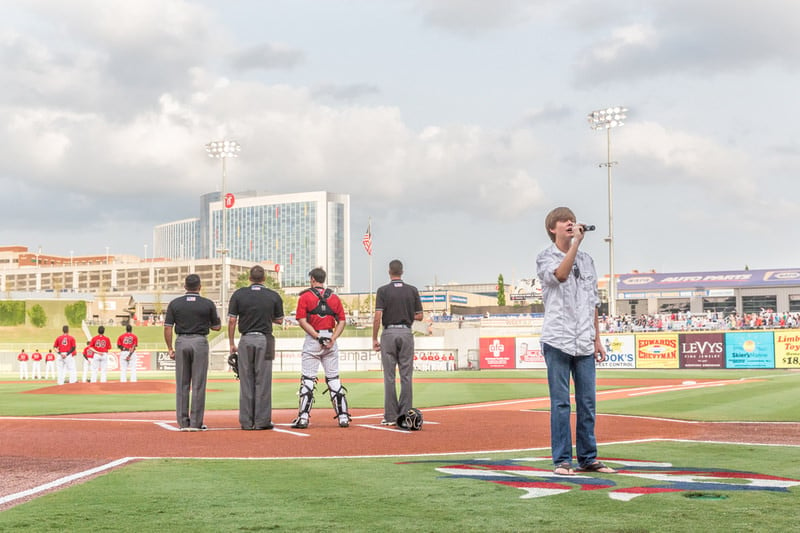 The Barons publicize tryouts before the season for the honor of singing the National Anthem. In 2015 it resulted in a wide range of singers from this middle school student, to beauty queens and even the chorus from Opera Birmingham. 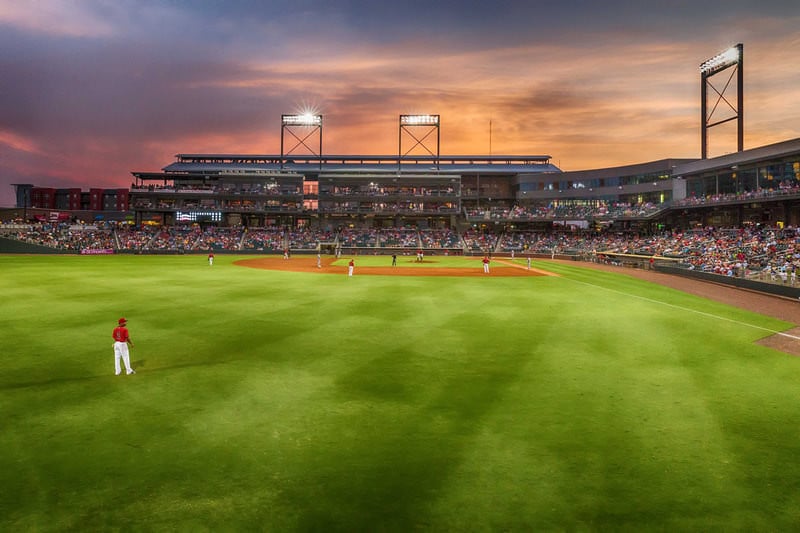 The Barons’ home is Regions Field in downtown Birmingham. Year after year this ballpark attracts record crowds and witnesses beautiful sunsets. It was built by the city and carried a price tag of 65 million dollars. It is considered one of the best designed minor league stadiums in the country. 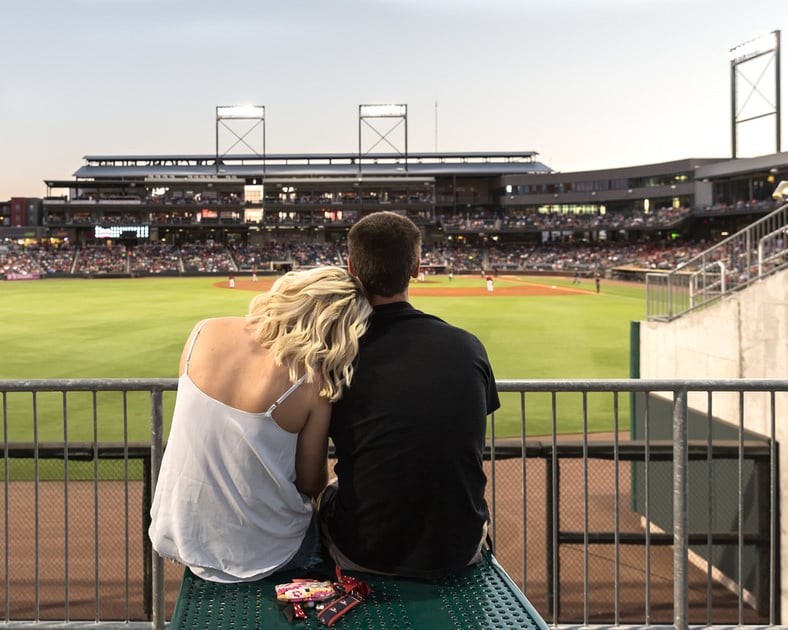 On any given game day, you find dating couples… 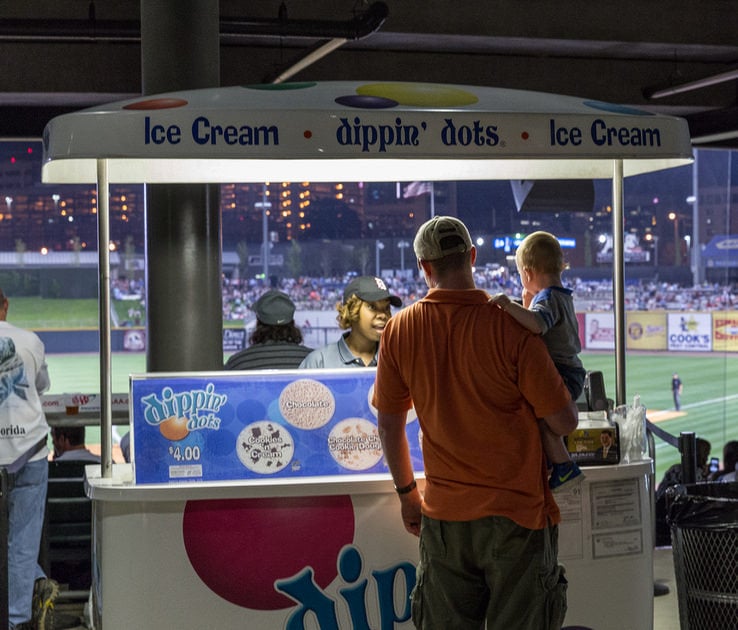 … and young families attracted to the game and the side benefits at the stadium. 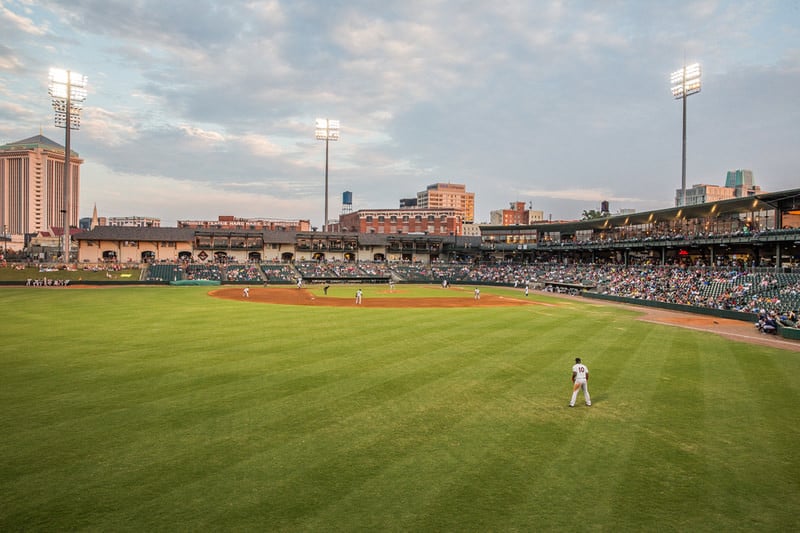 Riverwalk Stadium in Montgomery, Alabama: The team travels by bus from series to series and city to city. Thanks to former basketball star, Michael Jordan, who tried his hand at baseball after retirement and played one season with the Barons, they enjoy a better than average bus. Michael bought a new luxurious coach for the team during his year as a Baron. I never got to ride on the team bus, but did follow the team in 2015 to Chattanooga, Montgomery, Huntsville and Jackson, TN. 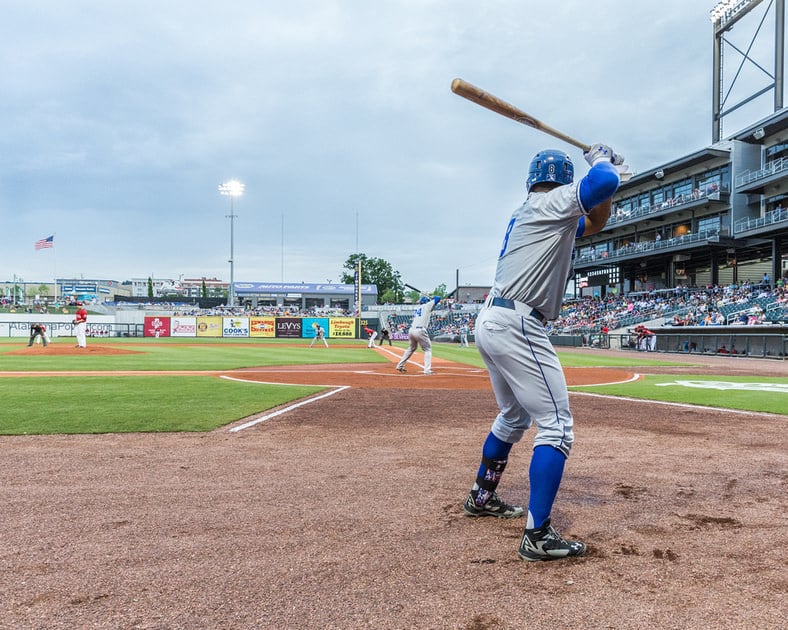 One of my photographic goals was to capture the larger feel for the game, how the pieces of the baseball puzzle fall into place. In the photo above the visitors threaten with a man on first, a batter at the plate and one on deck. 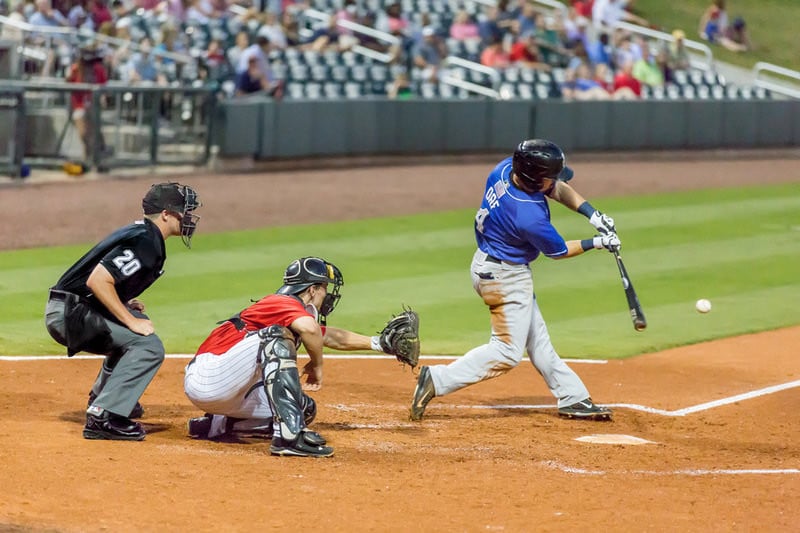 Although this was an unpaid project, it was well worth it in the many compliments I received on the work and all the drama I got to witness. The above photo, which I call “Baseball’s Decisive Moment” was selected by the league office in Atlanta as the cover photo for their 2016 Media Guide & Record Book. 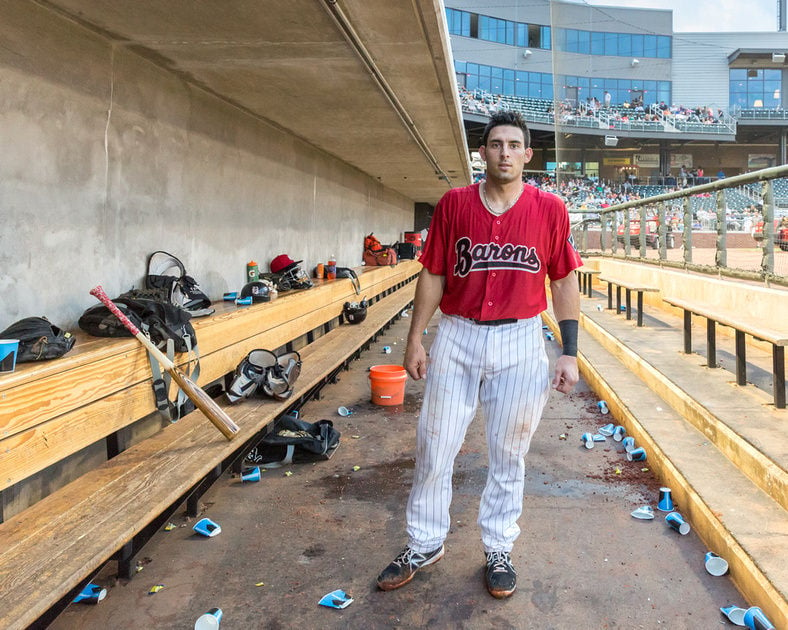 Through the season what had been a new crop of major league prospects in April saw their chances of making the major league club increase or diminish by the end of summer. In the case of the above player, he was later traded to another major league teams’ farm system. 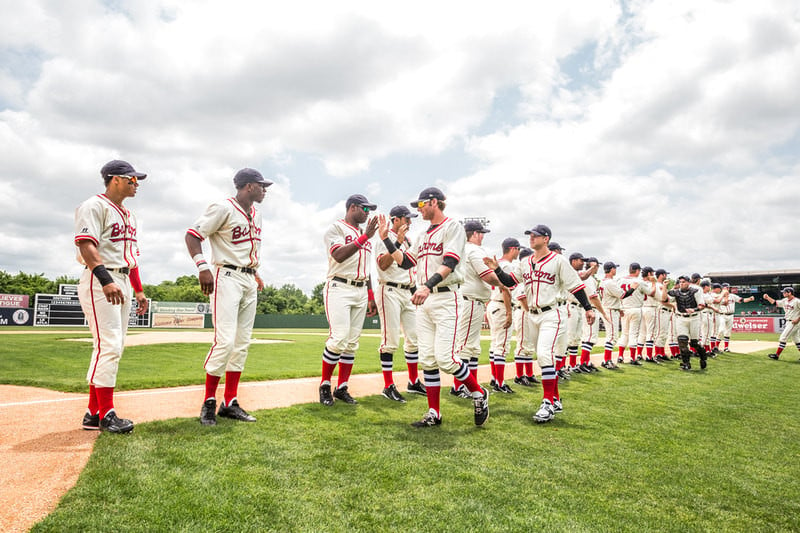 For others who played on the Minor Leagues Field of Dreams, it was a more direct route. Tim Anderson, second from the left in this picture taken at Rickwood Field, made it to the Barons’ parent team, The Chicago White Sox. At the beginning of the 2017 season with Chicago, Anderson signed a five-year, two-and-a-half-million-dollar contract. But for luck or talent, all our dreams should come so true.

About the author: Cliff Brane is a photographer based in Birmingham, Alabama. You can find more of his work on his website, blog, Flickr, and Twitter. This article was also published here.