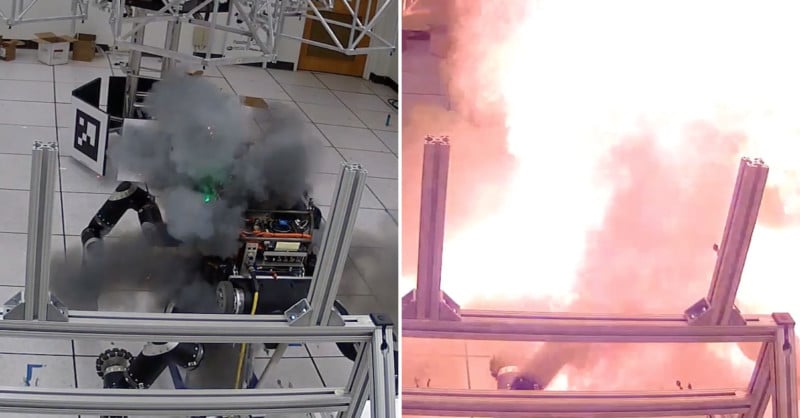 The FAA’s lithium ion battery regulations can be a real pain to deal with for photographers, but there’s a good reason the agency is worried about that battery—be it in your drone, your DSLR, or your Galaxy Note 7. It can cause some serious damage, as NASA found out back in June.

This recently posted video shows what happened to some NASA JPL engineers on June 14th, when they accidentally left one of their Robots plugged in to charge.

You can see the moment of truth in the GIF blow:

The researchers were replacing the battery in the RoboSimian robot, and left it plugged in when they left to go have lunch. While they were gone, the robot went BOOM.

According to the investigation, the engineers forgot to enable a power management system, and one of the cells might also have been damaged. These things let the battery undergo what’s called thermal runaway—basically a chain reaction that keeps getting hotter and hotter, feeding itself. That’s what we’re seeing in the GIF above.

To be fair, the battery in this robot is a lot more powerful than what you’ll find in your typical Nikon or Canon; in fact, it’s about 10 times more powerful than a standard laptop battery. But it’s a good, if extreme, reminder that battery safety is no joke.

(via Popular Mechanics via Engadget)

Photoshopped Portraits of Ex-Gang Members With and Without Tattoos

Swirly Bokeh for Cheap: Shooting with a $40 Vintage Soviet Lens