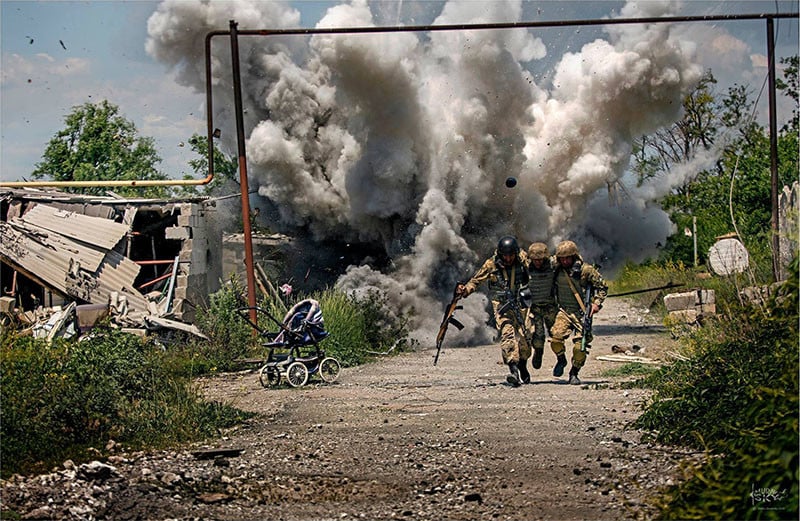 Ukrainian photographer Dmitry Muravsky has been dismissed by his country’s Ministry of Defense after his viral combat photos became the center of controversy regarding whether or not they were staged.

One particular photo, shown above, appears to show soldiers carrying a wounded comrade and fleeing from an explosion in Shyrokyne, a village in eastern Ukraine. That photo has been widely accused of being staged in recent days, and the Washington Post reported on the controversy late last week.

One Ukrainian officer who served in the village at the time, Viktor Moroz, took to Facebook to call the photo a fake.

“The men were told what to do and how to act, there were no injuries and sprained limbs,” he wrote. “There was no bombardment, an explosive device was detonated remotely, covered in a sack or in cement or in a mixture used for construction, or in chalk.”

“We emphasize that the only thing we are winning in the conflict with Russia is uncompromising and truthful presentation of information from the [front],” the letter says. “We kindly ask not to put these photos on a par with Russian fakes. The war is really going on, really, people are dying, and to prove it there is [a huge] number of documentary photo and video evidence.”

Muravsky has vigorously defended the photo, saying that it does show soldiers running away from an explosion caused by “the enemy.” He tells the Washington Post that he doesn’t have photos leading up to the explosion because he deleted the “unnecessary” shots.

Another of Muravsky’s photos found in the same “Pain of War” series is remarkably similar, showing soldiers fleeing from an explosion that fills the frame: 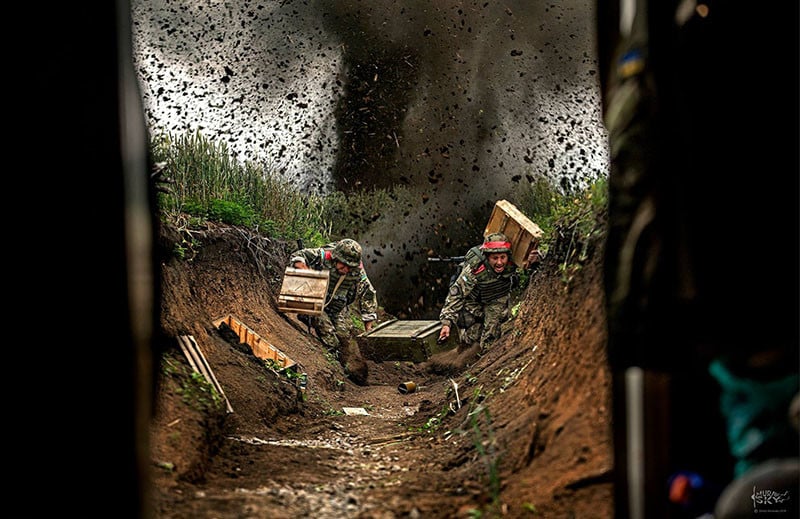 When questioned by the Washington Post, Muravsky wouldn’t say whether the photo was captured during an actual battle. Post journalists later discovered that the photo was uploaded the same day as another photo that was described by Muravsky as showing training.

This past Sunday, the Ukrainian government announced that would no longer be using any of the amateur photographer’s work and would be dismissing him from his role as “Volunteer Adviser.”

Ukraine says that the disputed photos were all captured before Muravsky appointment to the Ministry of Defense, that the images were never considered by the government to be real war photos, and that Muravsky never claimed that they were (to the government). Even so, the Minister of Defense has decided to dismiss Muravsky due to the “public reaction” to his photographs.

“Ukraine has always adhered to the principle of uncompromising truth and transparency in its war against the Russian aggression, including Russian propaganda,” Ukraine writes.

Infinitude: A Cosmic Short Film Made by Hand with Camera Techniques