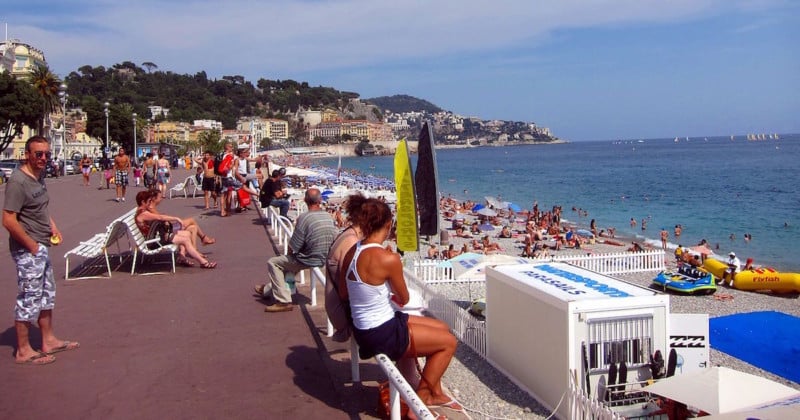 The deputy mayor of Nice is receiving a sizable dose of criticism and mockery online today after calling for the prosecution of people who are taking and sharing photos of French police enforcing the city’s controversial “burkini” law.

Burkinis are modest bathing suits worn by some Muslim women as a way to keep covered up while swimming, and Nice (along with 14 other towns) recently enacted a law making them illegal. Since then, police have been patrolling beaches like the one above and forcing women to remove their burkinis.

The law is, understandably, a controversial one and annoyed or offended beachgoers have been taking photos like the one below of armed French police forcing women to strip off their swimwear. These photos are being shared all over social media in order to shame the officials who passed the law and the officers enforcing it… and this has severely upset Nice deputy mayor Christian Estrosi.

First Nice enforces an abusrd burkini ban, then it threatens us for sharing photos! So RT! https://t.co/FmOjtI4DR6 pic.twitter.com/LV8kTvj8Cr

In an official press release, the mayor called for the creation of a national law that would make sharing such photos on social media illegal, and asking that offending photo takers be prosecuted.

“I deplore what appears to be a maneuver to denigrate the municipal police, and endangers its agents,” said the mayor. “Complaints have been filed to prosecute those who spread the photographs of our municipal police officers and as well as those uttering threats against them on social networks.”

“Complaints have been filed,” seems to imply that lawsuits are already in the works, but they seem to have no legal ground to stand on. Since it’s perfectly legal to photograph police doing their job in Nice, especially in such a non-threatening situation, some are interpreting Estrosi’s calls for justice as him petulantly trying to shut down criticism that is totally legal.

The uproar caused by Estrosi’s press release has, of course, only increased the number of times the photo above and others like it have been shared.

Someone is Building a Photo-Themed Bar with a Working Darkroom in D.C.