When it comes to critical feedback, knowing who to listen to and who to ignore is challenging. While I am by no means a “known” photographer, I’ve put enough of my work out into the wild that I’ve run into the inevitable criticism that it catches.

This article will cover my thoughts and advice on the question of which critics to listen to. It is based partially on my own experiences, as well as some of the incredible of wisdom I’ve absorbed from some of the great though leaders in this area, people like Brené Brown, Chase Jarvis, and Gary Vaynerchuk.

I created the flow chart (below) as a decision making tool for identifying who your critics are, and if they should matter. It is a simplified and condensed version of this full article which is written here. I hope the chart is handy for quick reference or a reminder, but there is much more context as I break it down further below. 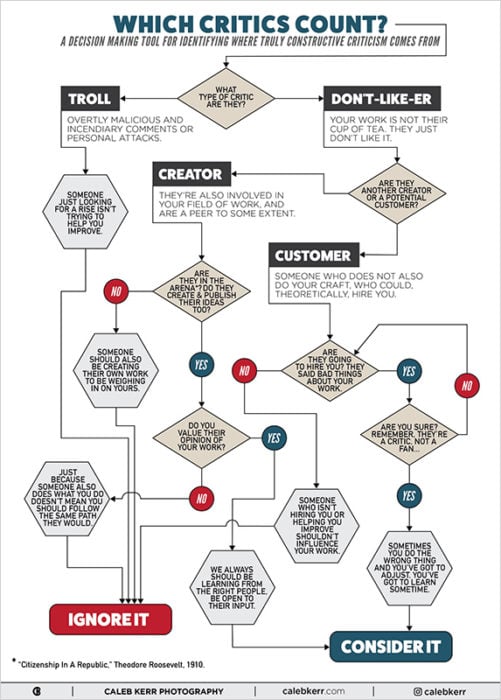 Opening yourself up to criticism

It takes courage to do something that you know will open yourself up to critical examination. Creating anything—a photograph, any piece of art, an article, an opinion, a product, a Tweet, a flow chart—exposes the creator to the inevitable negative responses.

For the purposes of this article, I’m specifically talking about receiving negative feedback and criticism. Knowing how to take praise is another interesting topic, but one for another time.

The key to handling criticism well is to learn how much weight to give to the comments of which critics. But this is not determined by the words they say, it’s based on who they are. My goal truly is to get better. No man is an island, and I need external input to have a better view of what I’m doing. But that input can’t and shouldn’t be from anyone with a keyboard and an opinion.

The first thing to determine is what type of critic are they? Are they a Troll or a Don’t-Like-er.

I give Trolls a special category because they’re the bottom-feeders of the criticism world, and they bring nothing to the table. They just want to upset people for personal enjoyment. Some of them are photographers or other creatives who say incendiary things to cut down others, trying to elevate themselves. They make irrelevant and personal attacks, and they criticize with the intent to hurt, with nothing else to add.

Their opinions aren’t worth the time it takes to read their comments. The photography world, especially on the Internet, is riddled with them. They’re what the Internet likes to call “haters,” and yes, just ignore the haters.

The people who say “I just don’t like it” are sometimes the hardest to ignore. They might say something like “Your editing is bad, I’d rather just see the RAW image.” Or they might be less cutting. “It feels hyper-realistic, I like a more natural looking photo.” For whatever reason, they just don’t like your style.

Look, tons of people aren’t going to like your work, that’s the reality of creating anything.

“You can be the ripest, juiciest peach in the world, and there’s still going to be somebody who hates peaches.” — Dita Von Teese

Something universally appealing likely won’t be ground breaking. Most things aren’t ground breaking, but you won’t know until you try. Experimental boundary pushing is so extremely critical to developing a style, but it by nature requires the creator to make some less-than-great work along the way, which is going to get some heat.

Why a Don’t Like-er feels the need to vocalize their dislike isn’t clear to me. Some people are insecure and it makes them feel better about themselves. Some people think everyone should care about their opinion. I suppose people just want to be heard. It’s a cruel world, but that’s never going to stop being the case, so learning to let unnecessary negativity roll off is crucial.

Handling a critic with grace and understanding is an art. In the following video clip, Kevin Smith (director of Clerks) responds to someone who didn’t like his movie Yoga Hosers (what a great name). He points out that the best he can do is make a movie he’d want to watch, and goes on to say, “What am I supposed to do, just not make it because some people might not like it?” (Clip contains mild NSFW language).

So some people just aren’t going to like it, but there’s a further distinction to make. There are two more subcategories: is the critic a fellow Creator, or (theoretically) a potential Customer?

Taking harsh words from someone else who is a creative, especially someone in your same field, can feel more credible than from others because they do what you do. The following quote is powerful for me when thinking about this topic. It is an excerpt from a speech by Theodore Roosevelt titled “Citizenship In A Republic,” which he delivered in Paris, France in 1910:

It is not the critic who counts; not the man who points out how the strong man stumbles, or where the doer of deeds could have done them better. The credit belongs to the man who is actually in the arena, whose face is marred by dust and sweat and blood; who strives valiantly; who errs, who comes short again and again, because there is no effort without error and shortcoming; but who does actually strive to do the deeds; who knows great enthusiasms, the great devotions; who spends himself in a worthy cause; who at the best knows in the end the triumph of high achievement, and who at the worst, if he fails, at least fails while daring greatly, so that his place shall never be with those cold and timid souls who neither know victory nor defeat.

There are other creatives who are your peers who are not in the arena. Before you bother listening to someone telling you you’re doing it wrong, be sure they’re getting bloody in the arena too.

Brené Brown’s talk “Why Your Critics Aren’t The Ones Who Count” is a great use of 22 minutes when you have the time, and has had a big impact on my views:

A fellow creative could be a professional photographer running a workshop that you are attending, or is the creative director at a company you want to be hired by. If they’re giving you specific, actionable things to improve on to better yourself and better your chances of being hired, consider their advice (at least with a grain of salt).

These people are some of the few critics you should be paying attention to.

Preface: I’m not implying customers are never right or never worth listening to—not at all. In this context, “potential customers” means virtually any non-photographer/non-creative who could, in theory, hire you.

A person online says “I hate your photos, I’d never hire you!” Are they a potential customer and worth changing your style for? No. They’re disparaging the quality of your work and if they were in the position of actually hiring a photographer, they would definitely not be calling you. 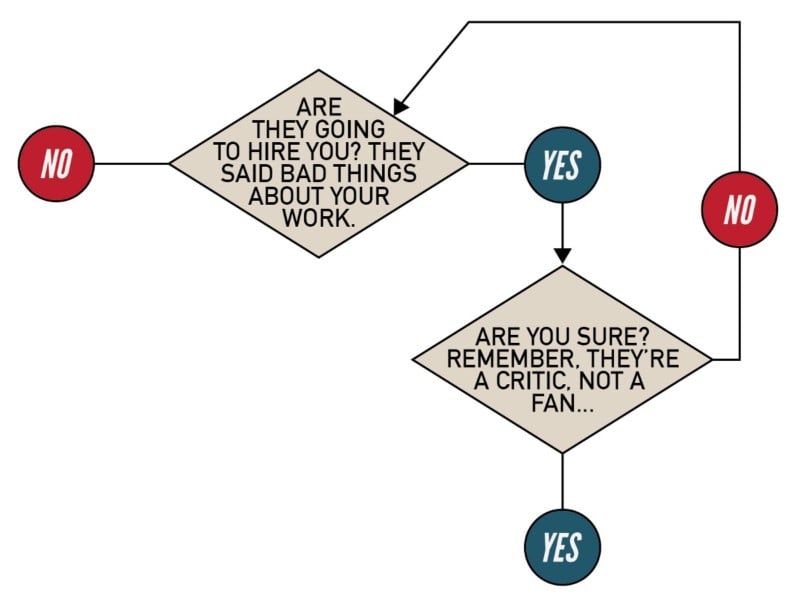 If they say they wouldn’t work with you because you have a reputation for always being late, cancelling at the last minute, or not holding up your end of a contract, and if that is true, then yes, that‘s something you should pay attention to.

Even though they are not going to be hiring you now, that information is important. Learn from mistakes, apologize when necessary, and move on. Of course, use good judgement here.

A previous article of mine was titled The Value of A Professional Photographer, or, “Can I Have All the Unedited Photos?” in which I gave my attempt at a detailed explanation of why, as a rule, I don’t deliver unedited photos to clients. In response (along with resoundingly positive feedback), came some people saying they hate my photos and would be angry if I delivered my photos to them if they had hired me.

Are these people my customers? Definitely not. Should I change the look I like in my photos, the look that plenty of people are hiring me for, because of their comments? Definitely not. Someone who doesn’t like my style telling me to change it is as unhelpful and irrelevant as someone walking into a smoothie shop and demanding they serve pizza because they don’t like smoothies.

As I mentioned before, keep in mind that someone could initially look like they are a Customer but actually are fellow Creators with experience in the industry (like an ad agency creative director who is hiring a photographer), and they can help you learn best practices. If an art director at a huge company you want to work with is talking to you about doing a shoot but is hesitant because of

My suggestion of how to parse this is not bulletproof, and there is always an exception to the rule, so take it with a grain of salt.

“I carry a small sheet of paper in my wallet that has written on it the names of people whose opinions of me matter. To be on that list, you have to love me for my strengths and struggles.” — Brené Brown

Just because someone is a professional, or a friend, or famous, doesn’t mean that you should sacrifice your vision in favor of what they think. But like Brené Brown said, be selective about whose opinions matter to you, and allow those people to influence you for the better.

In reading this article, someone might say “He‘s not that special, I’d never work with someone that cocky.” I’d argue first that they’re missing the point, but they’d be right—I’m not special. But I do want to be differentiable from everyone else, and standing out doesn’t happen when you aim for the middle.

When creating art—especially for a paying client—a creative’s responsibility is bring the best that they have to offer, and that can require fortitude, experimentation, and some thick skin. Don’t let someone say that confidence in your own vision is arrogance. It doesn’t mean your way is right, but that’s for you to decide.

Hence my motivation to write this piece: it’s not about never accepting feedback; it’s about being intentional about who you allow to steer your work. A confident skilled photographer will be able to create something great that their client maybe never could have imagined (which is why they hired the photographer in the first place). A timid skilled photographer who bends at the first sign of resistance to their vision will probably never have their ideas see the light of day.

About the author: Caleb Kerr is a commercial photographer based in Austin, Texas. The opinions expressed in this article are solely those of the author. Follow his work on Instagram, or view his portfolio on his website. This article was also published here.